At least 13 people lost their lives in New York City, along with three in suburban Westchester County, and New Jersey Governor Phil Murphy said in a tweet at least 23 people from that state had perished in the storm.

Among the fatalities, three people were found dead in a basement in the New York City borough of Queens, while four residents of Elizabeth, New Jersey, died at a public housing complex flooded by 8 feet (2.4 m) of water. 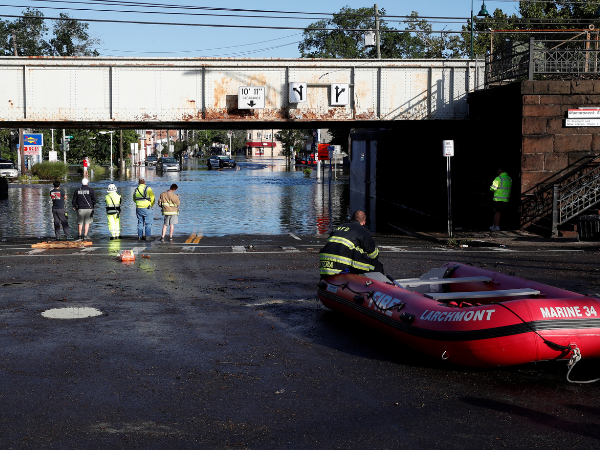 A victim in Maplewood Township, New Jersey, was swept away while he was apparently trying remove debris from storm drains in the area, police said.

“Sadly, more than a few folks have passed as a result of this,” Murphy said at a briefing in Mullica Hill in the southern part of the state, where a tornado ripped apart several homes.

The National Weather Service confirmed two tree-snapping tornadoes also struck Maryland on Wednesday, one in Annapolis and another Baltimore. A 19-year-old was reported to have died after trying to rescue his mother from a flooded apartment in Rockville, Maryland, according to the Washington Post. 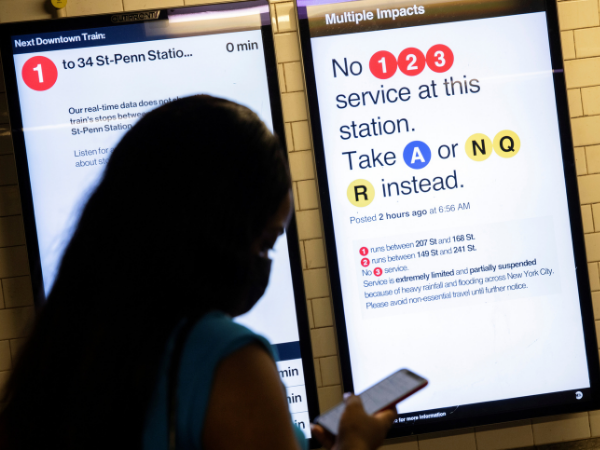 A commuter checks her phone with signs warning of delays caused by heavy rainfall and flooding in the New York City subway after the remnants of Tropical Storm Ida brought drenching rain and the threat of flash floods to parts of the northern mid-Atlantic, in New York City, U.S., September 2, 2021. REUTERS/Caitlin Ochs

The damage came three days after Ida, one of the most powerful hurricanes ever to strike the U.S. Gulf Coast, made landfall on Sunday in Louisiana, destroying entire communities.

But the loss of life in the Northeast dwarfed the confirmed storm-related death toll of nine in Louisiana.

In Conshohocken, Pennsylvania, outside Philadelphia, the Schuylkill River inundated hotels, warehouses and condominiums that line the river. Emergency squads were waiting for the waters to recede on Thursday before starting evacuations of possibly hundreds of people who live in nearby apartments, officials said.

Four people died in suburban Philadelphia as a result of the storm, according to county spokesperson Kelly Cofrancisco. And a Connecticut state trooper perished after his cruiser was swept away in floodwaters in the town of Woodbury early Thursday, state police said.

Video footage on the Weather Channel showed flames billowing from a house in the riverfront town of Manville, New Jersey, where flooding prevented access by fire trucks. The house next door appeared to have burned down to the waterline on a street where parked cars were submerged. 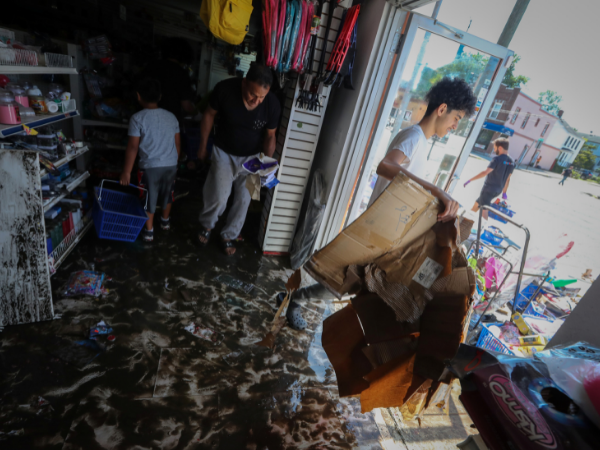 People remove flood-damaged merchandise from the Dollar Depot store that was flooded after the remnants of Tropical Storm Ida brought drenching rain, flash floods and tornadoes to parts of the northeast, in Mamaroneck, New York, U.S., September 2, 2021. REUTERS/Mike Segar

Ida’s remnants brought 6 to 8 inches (15 to 20 cm) of rain to a swath of the Northeast from Philadelphia to Connecticut and set an hourly rainfall record of 3.15 inches for Manhattan, breaking one set by Tropical Storm Henri less than two weeks ago, the National Weather Service said.

New York officials blamed much of flooding on the high volume of rainfall in a short span of time, rather than the daily total, which was within predictions.

“Because of climate change, unfortunately, this is something we’re going to have to deal with great regularity,” said Kathy Hochul, New York’s newly inaugurated governor.

The number of disasters, such as floods and heat waves, driven by climate change has increased fivefold over the past 50 years, according to a report released earlier this week by the World Meteorological Organization, a U.N. agency. 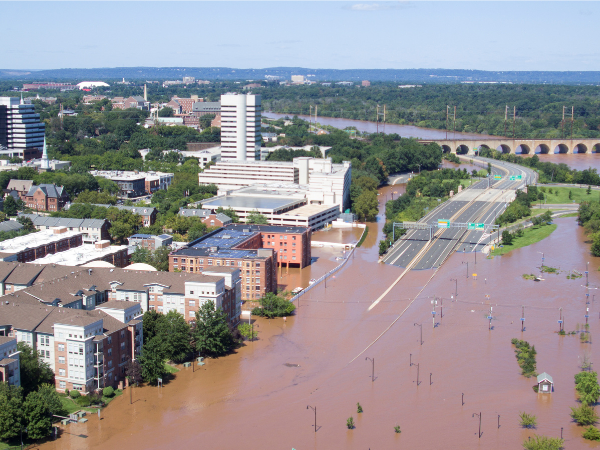 Roads are covered in floodwaters caused by the remnants of Tropical Storm Ida which brought drenching rain, flash floods and tornadoes to parts of the northeast in New Brunswick, New Jersey, U.S., September 2, 2021. Picture taken with a drone. REUTERS/Drone Base

The governors of New York and New Jersey urged residents to stay home as crews worked to clear roadways and restore service to subways and commuter rail lines serving millions of residents.

“Right now my street looks more like a lake,” said Lucinda Mercer, 64, as she peered out her apartment window in Hoboken, New Jersey, just across the Hudson River from New York.

Mark Haley of Summit, New Jersey, said getting home after a 15-minute drive to a bowling alley to celebrate his daughter’s sixth birthday on Wednesday night became a six-hour slog through floodwaters that frequently blocked his route.

“When we got out, it was a war zone,” said Haley, 50, a fitness trainer. When he made it home, he found almost 2 feet of water in his basement.

Nearly 170,000 electricity customers were without power on Thursday in the four northeastern states that got the bulk of the rain overnight, mostly in Pennsylvania and New Jersey, according to PowerOutage.US, which gathers data from utility companies.