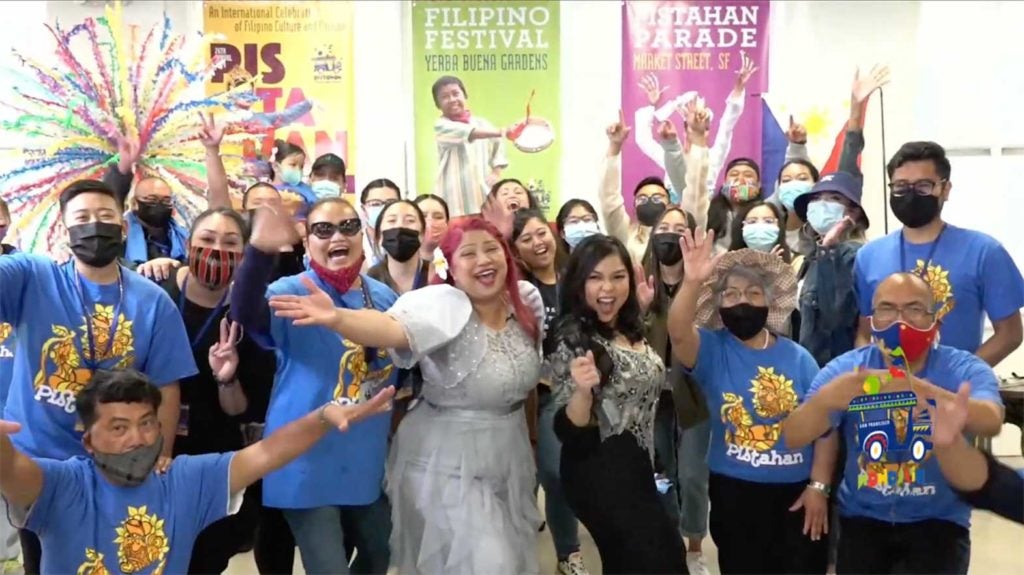 Livestreamed on Facebook, YouTube and Kumu — the Philippines’ number one social media platform — this year’s Pistahan was full of traditional and innovative Filipino and Filipino American entertainment from eight pavilions showcasing the talents, skills and expertise of Filipinos from across the globe while celebrating this year’s theme “Renew, Recover, and Rise Together.”

“The Filipino community is rooted in resilience. We are motivated by our pride in our rich cultural traditions and history,” said FAAE President Al Perez. “When we uplift one another and work together, we can do great things.”

A special video honoring front-line workers during the pandemic was streamed at the festival, paying homage to Filipino American nurses and medical staff. Check it out here.

Through the “Kamayan Kwento” project, Pistahan highlighted the resilient journeys of local Filipino-owned businesses and restaurants and also gave Pistahan volunteers the opportunity to reconnect and reflect on what inspires them to come back and help every year as they gathered for a meal – Kamayan style.

And as part of the festival’s heritage pavilion, Ann Reginio, a community organizer with the Santa Clara Valley chapter Filipino American National Historical Society, hosted an informative discussion on the history behind San Jose’s new Delano Manongs Park. Recently erected, the park is dedicated to the contributions of Filipino farmworkers who, with Mexican farmworkers, led the first labor strikes in the grape fields of Delano, California.

“Larry Itliong and Phillip Vera Cruz were the main manongs who led this movement that shaped the history of America,” said Reginio. “It’s just recently that we have gotten to tell the stories of our Delano manongs. And yes, they are a real part of U.S. history.”

Perez also delved into the rich Filipino history that Pistahan is connected to, as the parade and festival was founded in San Francisco 28 years ago after 4,000 Filipino families were displaced during the redevelopment of the Moscone Convention Center and the Yerba Buena Gardens complex.

“Pistahan was created out of the community’s activism to honor, preserve and celebrate the legacy of the Filipino American community’s struggles, triumphs and deep roots in the South of Market neighborhood in San Francisco,” Perez said. “Still, to this day, Pistahan is a testament to our commitment to rise together and overcome any challenge that comes our way.”

Watch videos from the Aug. 14 and 15, 2021 Pistahan festivities at www.pistahan.net. Also, check out the full-length Day 1 and Day 2 streams of the festival and parade.