Even as searchers scrambled to locate the remains of dozens more victims of a Florida condominium tower collapse, debate has begun in this beachside community over what to do with the site where the building once stood.

Should the prime beach property in Surfside be turned into a memorial? Or should it be sold for hundreds of millions of dollars to raise money for victims and their kin?

Experts in trauma stemming from disasters said it’s crucial that there be some type of physical place where the families of those killed in the June 24 collapse can visit. They also say creating that space should not be the responsibility of those facing the trauma.

But in an excruciating twist, it will be up to the survivors and family of those killed, who are the owners of the Champlain tower condos and land plot, to determine what exactly is done with the land now covered in rubble. That is land where up to 76 bodies may still be buried. Officials said on Thursday that 64 remains have been recovered in one of the deadliest structure collapses in U.S. history. 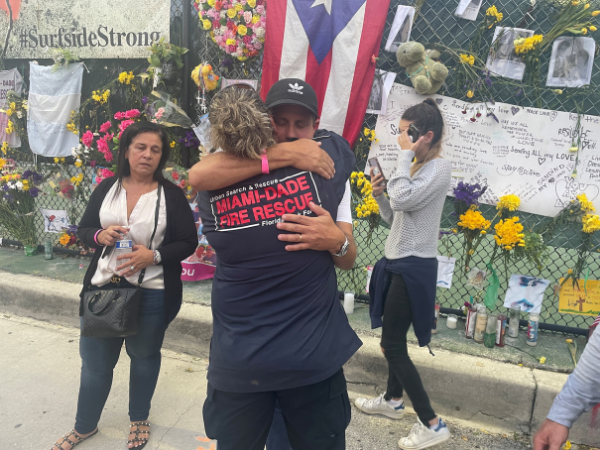 “My clients are in favor of the site being a memorial,” said Robert McKee, a Miami attorney representing several survivors and family members of victims in the collapse. “I can’t imagine why anyone would choose to live in a place where more than 100 people will likely have died.”

McKee and other lawyers took part in a Wednesday hearing before Miami-Dade Circuit Judge Michael Hanzman, who is overseeing the growing number of lawsuits connected to the collapse. A court-appointed receiver has been tasked with legally safeguarding the property and getting the maximum value for those who own it.

McKee said while his clients want to see a memorial on the land, some have expressed concern that doing so would result in survivors and families of victims receiving far less money for the land than it’s worth, which could be up to $130 million on the commercial market. Survivor Steve Rosenthal, one of McKee’s clients, has pushed political leaders to come up with a plan for the government to purchase the site of the Champlain collapse for full commercial value, according to the lawyer.

McKee said he pitched the idea before Judge Hanzman during Wednesday’s hearing – to have any combination of different levels of government buy the land and turn it into a memorial.

What does seem certain about the collapse site at this point is that it could take years for lawsuits related to the disaster to wind through the legal system, and until they do it is probably unlikely any concrete course of action will be decided upon, McKee said.

Yuval Neria, director of trauma and PTSD at the New York State Psychiatric Institute and an expert on disaster mental health, said it is critical for the survivors and family to have a memorial.

“Human beings need a grave, something to visit,” he said.

That could especially true in the Champlain tower collapse.

“There is something very tragic and very unique about this event,” Neria said. “It’s very different from a war, or terrorist event or even a natural disaster. There is really a sense of meaninglessness, and the psychological recovery will be very, very difficult.” 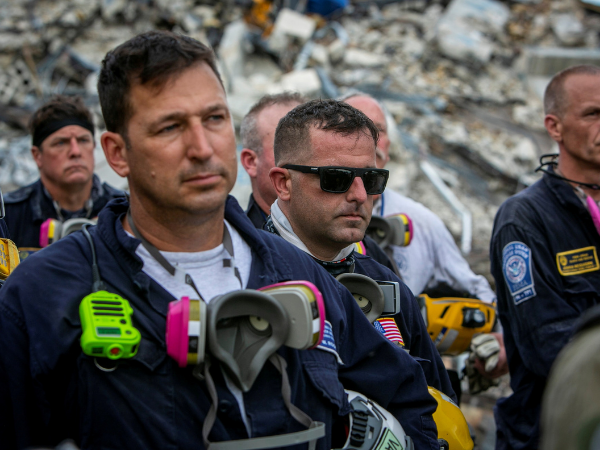 Members of a search and rescue team stand in front of the rubble, July 7, 2021. Jose A Iglesias/Pool via REUTERS/File Photo

For Laura van Dernoot Lipsky, founder and director of the Trauma Stewardship Institute and who has worked for over three decades on disaster response, giving the grieving the opportunity to have a memorial was of paramount concern.

Lipsky said American culture is among the most unhealthy when it comes to allowing disaster victims – or anyone – the time and space to grieve. Instead, she argues, the U.S. culture puts a premium on people who bypass the grieving process to engage in some action.

For that reason, she urged community leaders to take as much burden off survivors and family members of victims as possible.

“You want to create the space for the survivors, so that it’s not on them,” she said. “You don’t want it to be a burden on the folks who survived this unspeakable horror.”