What's next for Amazon's Bezos as he steps down as company CEO?

What’s next for Amazon’s Bezos as he steps down as company CEO?

Dwayne “The Rock” Johnson said it was time to bust out the tequila. Standing by the seashore, the celebrity wrestler and film star put his arm around Jeff Bezos, Amazon.com Inc’s founder. Bezos, in sunglasses, smiled for a picture and then shared it on the ‘gram. The men had just announced a movie deal for Amazon Studios.

Bezos, 57, is stepping down as Amazon’s CEO on Monday. He’ll remain executive chairman and the company’s biggest shareholder, but his Instagram account shows he has plenty of other interests to occupy his time.

The science fiction fan is planning a joy ride to suborbital space with his best friend and brother, Mark, this month, one recent post said. In another, Bezos is behind the wheel of an electric pickup truck built by Rivian, a startup that Amazon funded, traversing the desert in a cowboy hat to see a rocket capsule land. The final frontier has long beckoned Bezos, who has poured billions of dollars into his company Blue Origin to promote tourism and infrastructure in space. The venture’s first crewed flight is to embark July 20, less than two weeks after Richard Branson’s Virgin Galactic to commence a new epoch of travel beyond earth.

Bezos leaves Amazon’s former cloud computing chief Andy Jassy to run a company that is bigger and more valuable than ever. It’s unclear how Bezos will govern from the sidelines.

Neither Amazon nor Bezos responded to a request for comment. 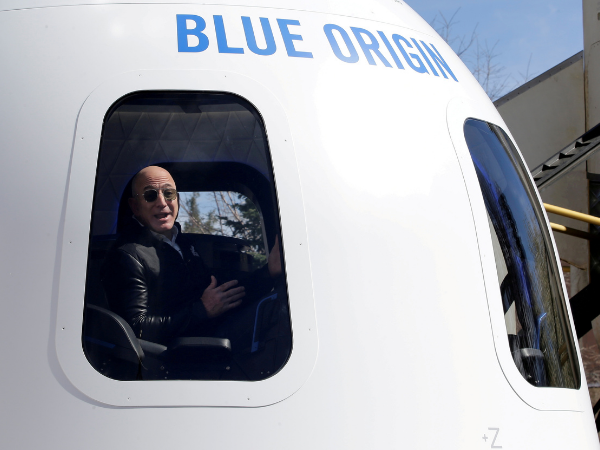 Bezos said in an April letter to investors that he would focus on new initiatives as executive chair and making Amazon a better place to work. That followed employee frustration that surfaced during a failed unionization campaign in Alabama.

His Instagram, though, spotlights his interest in Tinsel Town. Bezos posted about Oscar nods and Golden Globe wins for Amazon Studios, and during his last annual meeting as CEO he talked about re-imagining screen heroes for the 21st century through Amazon’s deal to buy MGM.

(Not featured on his Instagram is a yacht, longer than a football field, which Bezos reportedly owns and which will come with a support yacht and helipad once it’s built, according to Bloomberg News. His partner, Lauren Sanchez, is a helicopter pilot.)

Bezos has also met with public officials to draw attention to his philanthropy. He discussed his climate efforts with French President Emmanuel Macron and gave Washington Governor Jay Inslee a tour of a homeless shelter, his posts show.

He’s had some fun with music stars Katy Perry, Lil Nas X and Lizzo, too.

LATEST
US July Fourth cookouts feel the heat of increasing food prices
What is ‘interactive process’ in worker requests for accommodation?
How Americans are boycotting companies now
U.S. okays SpaceX’s Starlink internet for use with ships, boats, planes
US Treasury yield curve inverts again: What is it telling us?
Tesla closes an office as layoff strikes Autopilot jobs