Biden to visit Florida and grieve with families of condo collapse

U.S President Joe Biden and his wife, Jill Biden, were headed on Thursday to Surfside, Florida, site of the deadly condominium collapse, to offer condolences to families of those killed and missing as the casualty toll climbed.

Biden, whose personal experience with tragedy has been a hallmark of his political career, will reprise the role of “consoler-in-chief” while rescue teams search for victims in the rubble of the high-rise, which partially caved in a week ago as residents slept.

The confirmed death toll rose to 18 on Wednesday with the discovery of six more bodies in the ruins of the Champlain Towers South condo, including the remains of two children, aged 4 and 10, Miami-Dade County Mayor Daniella Levine Cava said. Another 145 people are missing and feared trapped in the rubble.

Authorities have held out hope that more survivors might be found, but prospects have grown dimmer by the hour. Nobody has been pulled alive from the wreckage since the early hours of the disaster in the oceanfront town of Surfside, adjacent to Miami Beach.

The search was suspended in the early morning hours on Thursday due to concerns about the stability of the remaining structure, the Miami Herald reported, citing police multiple officers.

Thursday’s trip is Biden’s second visit to the scene of a disaster since he became president.

In February, he traveled to Texas after a powerful winter storm left millions without power or clean water for days and killed several people. 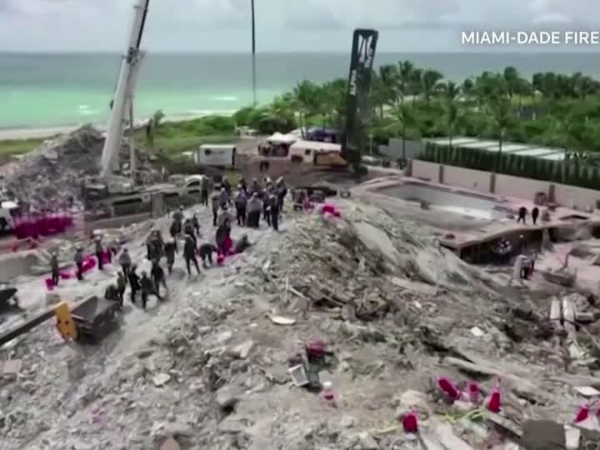 Six more bodies have been found in the shattered ruins of a Miami-area condominium tower over the past 24 hours, officials said on Wednesday, bringing the confirmed death toll to 18 nearly a week after the building collapsed. Jayson Albano reports.

Biden, who took off from Joint Base Andrews in Maryland around 7:30 a.m., had delayed his visit to Florida to avoid interrupting rescue efforts. He has issued an emergency declaration and provided state and local officials with federal assistance.

FEMA and the U.S. Army Corps of Engineers have deployed teams to assist with search-and-rescue, incident management and debris removal. FEMA also has coordinated with state and local officials to open a family assistance center and provide communications support.

Biden, a Democrat, will likely appear beside Florida’s Republican Governor Ron DeSantis, seen as a potential top-tier candidate to challenge Biden’s reelection in three years. During his rise in Florida politics, DeSantis has built a brand as a sharp-elbowed partisan warrior, often challenging Biden on issues such as the COVID-19 pandemic and immigration.

Biden planned to use the visit to express thanks to the “heroic first responders, search-and-rescue teams, and everyone who has been working tirelessly around the clock,” White House press secretary Jen Psaki said.

The president and first lady also will “meet with families who have been forced to endure this terrible tragedy,” Psaki added.

Biden’s gift for connecting his own hardships with the grief and anguish of others has become a defining feature of his persona, having endured the deaths of his first wife, a daughter and a son during his years in public life.

The governor and the president spoke by telephone last week, and afterwards DeSantis praised Biden for his support.

Investigators have not concluded what caused nearly half of the 40-year-old condo complex to crumble in one of the deadliest building collapses in U.S. history.

But a 2018 report prepared by the engineering firm Morabito Consultants ahead of a building safety recertification process found structural deficiencies in the 12-floor, 136-unit complex that are now the focus of inquiries.

The Washington Post reported late on Wednesday that the majority of the board of the Surfside condominium, including its president, resigned in 2019, partly in frustration over what was seen as the sluggish response to the report.