The top two Democrats in the U.S. Congress on Sunday vowed to probe the “rogue” actions of the Justice Department during former President Donald Trump‘s term, including its move to seize the communications records of Democratic lawmakers.

Those reviews will run parallel with an investigation by the department’s own internal watchdog into its moves to subpoena phone records of Representatives Adam Schiff and Eric Swalwell, as part of a probe into leaks of classified information.

The Justice Department under former attorneys general William Barr and Jeff Sessions was regularly accused of putting Trump’s personal and political interests ahead of the law.

“The Justice Department has been rogue under President Trump, understand that, in so many respects. This is just another manifestation of their rogue activity,” House Speaker Nancy Pelosi told CNN’s “State of the Union.”

“This was nothing less than a gross abuse of power, an assault on the separation of powers,” Schumer told a news conference in New York. “They must testify, Sessions and Barr must testify under oath as part of a formal congressional investigation.”

A White House official on Friday criticized the Trump administration actions as “appalling.” 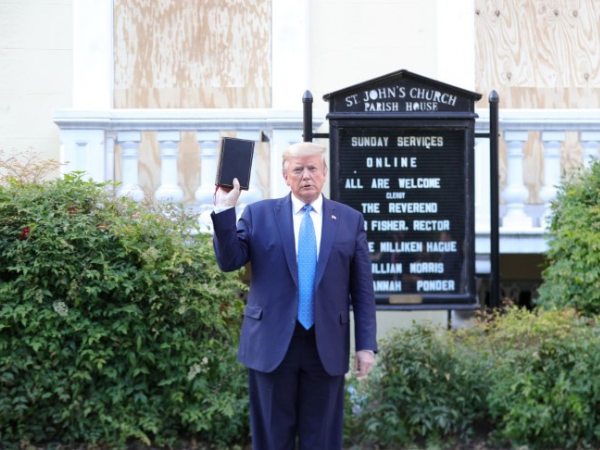 U.S. President Donald Trump holds up a Bible as he stands in front of St. John’s Episcopal Church across from the White House after walking there for a photo opportunity during ongoing protests over racial inequality in the wake of the death of George Floyd, at the White House in Washington, U.S., June 1, 2020. REUTERS/Tom Brenner/File Photo

During a press conference at the Group of Seven leaders’ summit in Britain, President Joe Biden could be seen holding a card with talking points on the issue.

“Trump abused power of DOJ  was out of control. Now we have to clean it up,” the card read, according to images captured by a U.S. network pool camera. “I’ve made it clear this DOJ will reflect my values and principles and priorities – not Donald Trump’s.”

Biden was not asked about the probes during his news conference.

Pelosi said the probe by the department’s inspector general, Michael Horowitz, would be important but was not a substitute for congressional investigation.

Pelosi said it was “beyond belief” for Barr or Sessions to say they knew nothing about it. Barr told Politico on Friday that he had no recollection of any congressman’s phone records being subpoenaed.

Pelosi sidestepped a question about whether they would be subpoenaed, saying she hoped the pair would appear voluntarily.

Horowitz’s office said on Friday it was launching a review of the department’s use of subpoenas to obtain the communications records of both lawmakers and journalists, including whether “improper considerations” drove those decisions.

The New York Times on Thursday reported that the Trump-era Justice Department subpoenaed Apple Inc for data on Schiff and Swalwell.

Apple also told Donald McGahn, a Trump-era White House counsel, that the Justice Department had subpoenaed information about him in early 2018 — and barred the company from notifying him of the request — the Times reported on Sunday, citing two people familiar with the matter.

McGahn left the White House in 2018 after it emerged that he was a star witness for Special Counsel Robert Mueller’s probe into Russian interference in the 2016 presidential election.

“It certainly appears that they were using the Justice Department to go after the president’s political enemies. There’s a lot we don’t know, obviously,” Schiff told MSNBC.

Microsoft President Brad Smith said in a Washington Post opinion piece on Sunday that the Justice Department needs to “tighten the use of gag orders and probes of Congress and the news media.”

He added “Congress should prohibit the executive branch from conducting its investigations wholly in secret absent a strong showing of necessity supported by compelling evidence.”

Senator Susan Collins, one of that chamber’s most moderate Republicans, said on Sunday that she supported the Justice Department’s internal probe.

“Has the Justice Department abused its power by going after members of Congress or the press for partisan political purposes?” she asked in an interview on CBS. She also noted that the question of whether members of Congress had leaked classified information — which the Trump administration was probing in its subpoenas — was a “serious” matter that also bore investigation.

Biden’s attorney general, Merrick Garland, has come under fire from Democrats in recent weeks for a pair of decisions seen as shielding Trump from scrutiny. Legal experts said those decisions appeared to reflect a department focused on the law and protecting the institution of the presidency, not on political interests.

Garland also said on Friday that the department would step up its enforcement of election law and warned that a series of unofficial audits of the November presidential election being carried out in a handful of U.S. states may be a violation of federal civil rights laws.

The department under Garland has said it will no longer seek source information from journalists, after CNN, the New York Times and the Washington Post said the Trump administration tried secretly to obtain reporters’ phone records.

Garland is due to meet with executives from all three outlets to discuss the leak probes on Monday, a department spokesperson and representatives of the companies said.