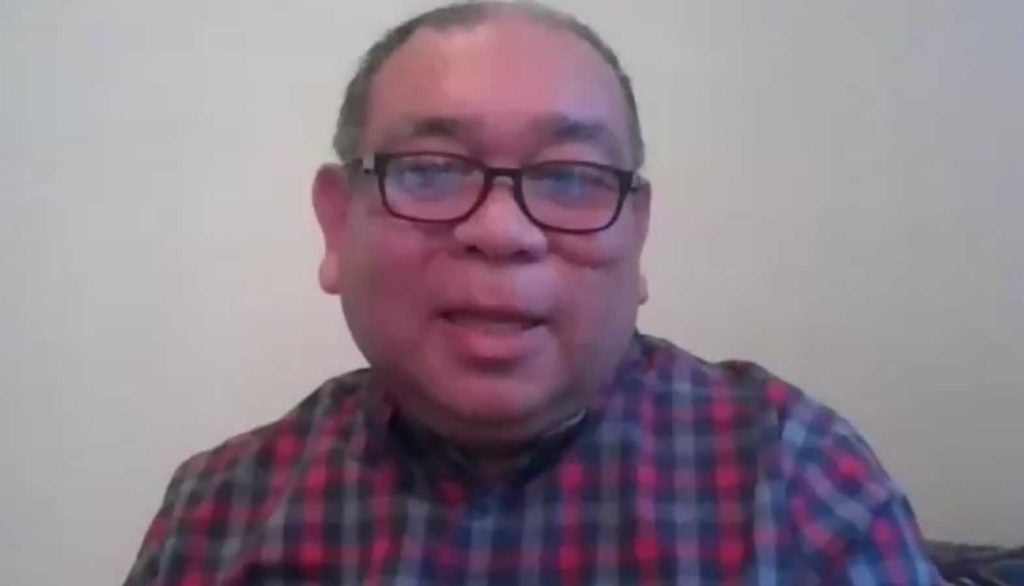 Noel Quintana, 61, a Filipino American man who was slashed across the face amid a rise of anti-Asian hate crimes during the coronavirus pandemic, spoke at a virtual event on Tuesday about next steps for the Asian American community after a year of hate. He said it’s important for bystanders to know what to do in situations like the one he faced in February. SCREENSHOT

Noel Quintana remembers  the feeling of blood oozing from his face into his hands. He was on his way to work on the L train in New York on Feb. 3 when somebody slashed his face with a box cutter.

There were many people on the train, he said, yet nobody offered to help him even when he asked.

Nobody documented the incident on video. Nobody informed the train operator that someone had been hurt inside the train. People were shocked, but didn’t do anything.

“I felt alone and I felt so scared when nobody even helped me because I thought that I would die because of the blood oozing,” Quintana, 61, said Tuesday during a virtual discussion about next steps for the community in the midst of the rise in anti-Asian hate. The event was hosted by New York non-profit Asian American Federation.

The attack on Quintana came amid a spike in anti-Asian hate incidents during the pandemic. Between March 19, 2020 and Feb. 28, 2021, the group Stop AAPI Hate, which was formed in response to the rising xenophobia against Asian Americans, reported 3,795 hate incidents.

Kevin Nadal, a psychology professor at The City University of New York, said it’s important to recognize the uptick in anti-Asian hate throughout the past year because of the pandemic, but also to understand that racism against Asian Americans is not new.

The Page Act of 1875, the first immigration law to prevent certain people from coming to the United States, targeted Asian women. The Chinese Exclusion Act of 1882 barred Chinese immigrant workers from the United States for 10 years, was extended multiple times and was repealed in 1943 with the Magnuson Act.

History is rife with acts of violence against Asian Americans, including the Watsonville Riots in 1939 where Filipino Americans were targeted; the incarceration of Japanese Americans during World War II; the murder of Vincent Chinin 1982; and the targeting of Muslim and South Asian Americans following 9/11.

“We’ve seen a lot of, thankfully, unity,” said Arthur Chi’en, a reporter at WNYW-TV FOX 5 in New York who moderated Tuesday’s event. “We’ve seen a lot of outrage. And we’re at a point of asking what now? What do we do with it now?”

Some of the discussion centered around the role of bystanders, particularly following the recent attack on Vilma Kari, a 65-year-old Filipino American woman, who was walking to church in Manhattan when she was repeatedly kicked by her perpetrator. A clip of the incident that went viral showed bystanders who appeared to do nothing.

Donnay Edmund, community upstander coordinator at the nonprofit Center for Anti-Violence Education, said some things bystanders can when it may not feel safe to de-escalate a situation is check on the person afterward, call for medical help, give them water or get them to a safe place.

“That’s something we all can do,” Edmund said. “And that’s the culture we want to create, where we look towards each other and care for each other and not turn away.”

Nadal said he hopes what the Asian American community is experiencing now encourages them to care about the challenges and issues other marginalized groups face.

“It shouldn’t take communities having to screen or for communities to have to get killed, for people to take notice,” he said.

Nadal said taking action in response to the rise in anti-Asian hate is different for everyone depending on their capacities. Some might choose to participate in demonstrations. Some might be in leadership positions at companies where they can review policies for racial biases. Some might be able to teach their children about social justice.

“The more that we educate our young people, the more that we’re working on prevention,” said Rama Issa-Ibrahim, deputy public advocate of justice, health equity & safety at the Office of the New York City Public Advocate.

Jo-Ann Yoo, executive director of the Asian American Federation, said the non-profit last week launched a campaign called Hope Against Hate to raise $30 million to invest in solutions to prevent further attacks, including a centralized reporting system for anti-Asian hate incidents through calls and text, and online. She said the group’s member agencies say that community members are reporting incidents to non-profits rather than to the Stop AAPI Hate website, and they need to be encouraged and taught how to document those properly.

Funding would also go toward safety ambassador programs in Asian American majority neighborhoods where volunteers can be trained in de-escalation strategies and mental health first aid, toward providing seniors with escorts in public places, toward providing defense trainings in multiple languages, and more.

“What Hope Against Hate campaign really is — we want to be able to create some resources to be able to help Noel to make sure that he’s going to be okay through all of this,” Yoo said. “It’s an ambitious campaign. But if we can’t be ambitious and we can’t be bold now, what’s the use of us screaming out and holding all of these press events? I think we need to make some bold demands here.”