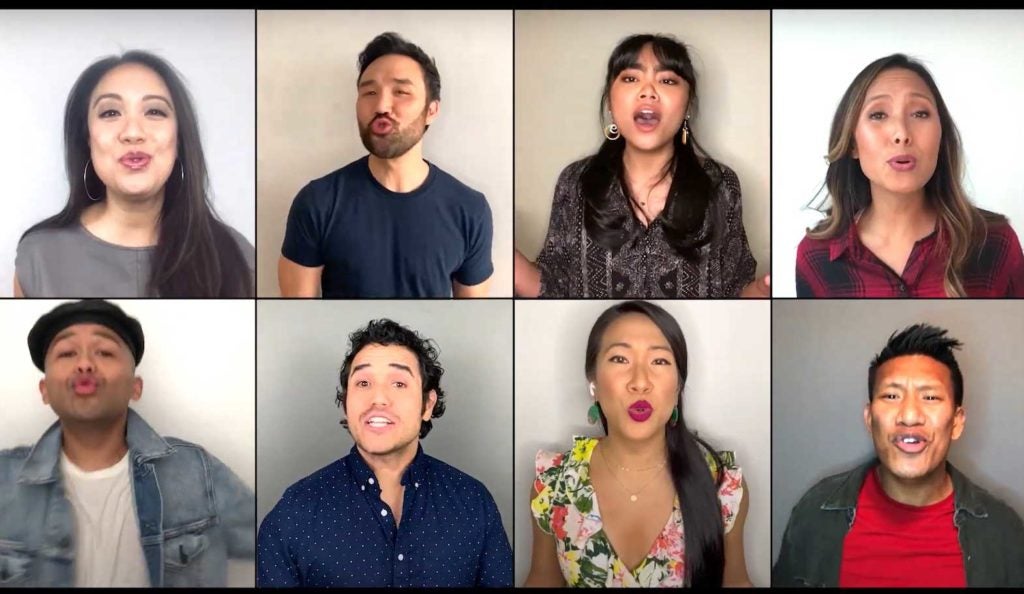 Fil-Am Broadway leading ladies such as Lianah Sta. Ana (Kim in “Miss Saigon”) and leading men Adam Jacobs (Aladdin in Disney’s “Aladdin,” Simba in “The Lion King,” Marius in “Les Miserables”) and Marc delaCruz (Alexander Hamilton and Aaron Burr in “Hamilton”) were part of the performance.

It was recorded as a music video (watch here) and presented at the virtual ceremony held earlier this year. FSC is an annual private recognition activity held in appreciation for the fast food chain’s employees. The song was chosen for its positive lyrics.

The song was used in the movie’s end-credits, originally sung by Stevie Wonder and the group 98 Degrees with music by Matthew Wilder and lyrics by David Zippel. Lea Salonga was the singing voice of the title character.

The cast of the music video are all members of Broadway Barkada, a support group for Filipino American performers in the Broadway industry.

Broadway Barkada was selected to perform the song because they embodied positivity and captured the energy that Jollibee North American wanted to share with their awardees. The company also wanted to showcase talented Fil-Am artists.

The music video’s music arrangement was by Steven Cuevas, who served as the music director for the touring production of “Once on This Island.” Salonga played Erzulie in the musical’s Broadway production before it went on tour. The show’s costumes were designed by Tony Award winner Clint Ramos.

Broadway Barkada was founded in 2009. Through art and education, it aims to bring the Filipino experience and a deeper meaning of its culture and artists to a diverse audience.

“We have remained nimble and optimistic which has led Jollibee to defy expectations amidst an extremely difficult year and experience double-digit sales growth across North America,” said Maribeth Dela Cruz, President of Jollibee Group North America.

“We would not be weathering these hard times without the support of our customers. We’re incredibly grateful for the continued support we’ve received from across these regions.”

LATEST
Canada to join Five Eyes allies in banning Huawei, ZTE 5G equipment
Dangers of Baby Sleep Products: New law bans those that have caused infant deaths
SpaceX is set to become the most valuable U.S. startup
Why Hiring Digital Marketing Services Is a Must In 2022
Four resilient SF Bay Area Filipino restaurateurs honored
The Many Ways In Which SEO Backlinks Help Your Website Get More Visitors