Trauma from mass shootings lingers for generations in Colorado

Trauma from mass shootings lingers for generations in Colorado

An 80-year old man, a pair of soldiers in military garb and a 20-year-old student were among the stream of people braving cold mountain winds to lay flowers at one of the makeshift memorials for 10 victims of Colorado’s latest mass shooting.

There have been so many shootings in this Western state in the 21 years since two students massacred 13 people before killing themselves at Columbine High School in Littleton that generations of residents have seen similar memorials erected for the dead. 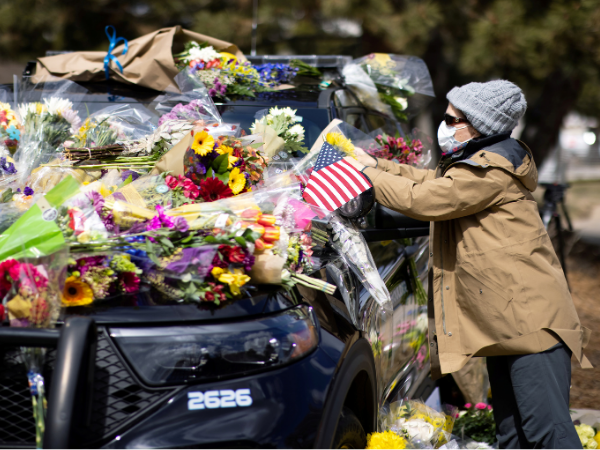 Joan Lutz, places a note that says, “Thank you police officers, our hearts are grieving,” at a memorial for Officer Eric Talley, who was killed yesterday during a mass shooting in King Soopers grocery store, at Boulder Police Department, in Boulder, Colorado, U.S., March 23, 2021. REUTERS/Alyson McClaran/File Photo

“We have to re-evaluate our morals and values,” said Mike Tucker, 80, a retired marketing executive. “We seem to have lost the ability to distinguish those.”

His voice cracked and he blinked back tears as he lay a bouquet at Boulder Police headquarters in honor of Eric Talley, a policeman killed along with nine others in Monday’s massacre.

Another memorial sprang up at the site of the shooting – a King Soopers grocery store – where people people wept silently as they placed flowers and votive candles along a 100-yard stretch of chain-link fencing set up to contain the crime scene.

One placed a sign that said, “Pray for Boulder.” Nearby, a man softly played the cello. FBI investigators swarmed around a black SUV in the parking lot.

Police on Tuesday identified 21-year-old Ahmad Al Aliwi Alissa of Arvada, Colorado as the suspect accused of killing shoppers and workers in a hail of bullets at the supermarket, marking the United States’ second mass shooting in a week and adding to the state’s tragic history of deadly massacres.

The litany of places where Colorado’s shooting attacks have occurred over the last two decades resonates deeply and personally for many residents. Columbine, the suburban high school, remains one of the worst school shootings in U.S. history. In Aurora, a gunman killed 12 people and wounded 50 at a screening of the Batman movie “The Dark Knight Rises” in 2012. And this week, Boulder. 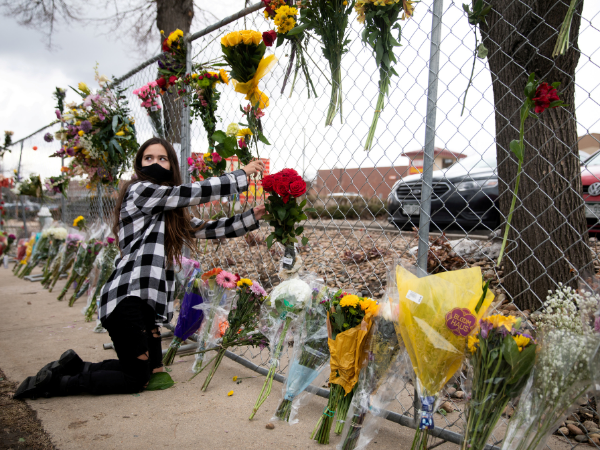 Littleton resident Jane Dougherty’s children experienced their first lockdowns in elementary and middle school at campuses next to Columbine. Now her granddaughters hide in kindergarten lockdowns. In 2012, Dougherty’s sister, Mary Sherlach, was murdered in the mass shooting at Sandy Hook Elementary School in Connecticut.

“People don’t understand how many of us have been affected multiple times by gun violence,” said Sandy Phillips, whose daughter, Jessica Ghawi, was murdered at “The Dark Knight Rises” showing. “I always say you’re one bullet away.”

One of her daughter’s college professors – a woman who helped her students process their grief after Jessica’s death – lost her own husband in the Boulder shooting, said Phillips, now an advocate for survivors of gun violence.

Another factor is copycat actors, said Dave Cullen, who has written books on mass shootings at Columbine and Marjory Stoneman High School in Florida.

“Having it happen in your community and over and over, it’s just really real and plausible for you to try it too if you’re so inclined,” he said.

The epidemic of mass shootings and the trauma left in their wake are certainly not limited to Colorado.

“I don’t think we’re ahead of anybody else – it’s a national problem,” said Marilyn Whittaker, a retired school psychologist who lay flowers at the makeshift memorial at the Boulder police headquarters.

But in Colorado, where violence has occurred again and again, the trauma is palpable.

Dougherty looks around for an exit every time she’s in a crowded public space. Her daughter is afraid to take her new baby out in public.

“We’re all a bit traumatized by living in a culture where this is going on – by living in a society that has this level of violence,” said Beverly Kingston, director of the Center for the Study and Prevention of Violence at the University of Colorado Boulder.