Provocative and polarizing U.S. talk radio luminary Rush Limbaugh, a leading voice on the American political right since the 1980s who boosted, and was honored by, former President Donald Trump, has died at age 70 after suffering from lung cancer, his wife said on Wednesday. 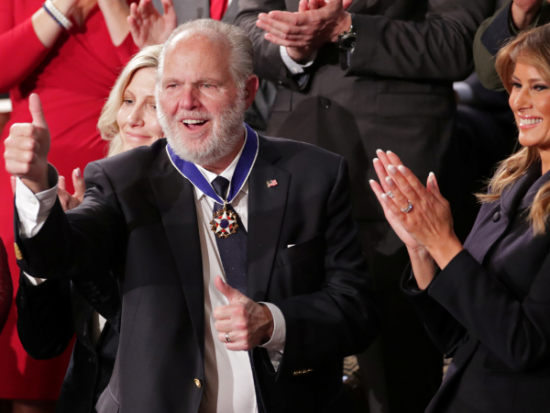 Conservative radio talk show host Rush Limbaugh reacts as the U.S awards him the Presidential Medal of Freedom. First Lady Melania Trump during U.S. President Donald Trump’s State of the Union address to a joint session of the U.S. Congress in the House Chamber of the U.S. Capitol in Washington, U.S. February 4, 2020. REUTERS/Jonathan Ernst/File Photo

Limbaugh, who pioneered the American media phenomenon of conservative talk radio and became an enthusiastic combatant in the U.S. culture wars, had announced in February 2020 that he had been diagnosed with advanced lung cancer. In a statement on Facebook announcing his death, his wife Kathryn Adams Limbaugh wrote, “Rush’s love for our country, and for all of you, will live on eternally.”

Limbaugh’s appeal and the success of his top-rated radio show arose from his brash and colorful style, his delight in baiting liberals and Democrats, and his promotion of conservative and Republican causes and politicians. His radio show became nationally syndicated in 1988 and quickly built a large and committed following, making him wealthy in the process.

Liberals loathed him. Detractors such as Democratic former Senator Al Franken – a former comedian who wrote a book titled “Rush Limbaugh Is a Big Fat Idiot and Other Observations” – criticized him as a divisive figure who distorted facts. 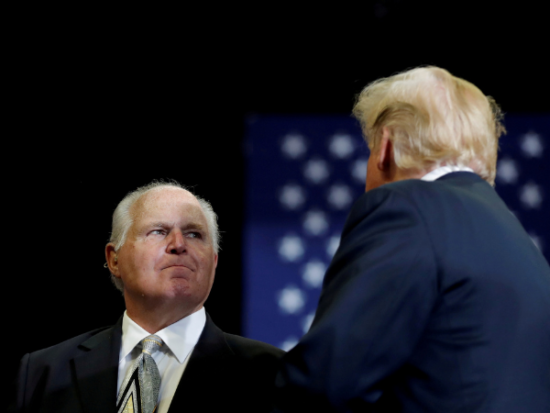 Trump, a former reality TV personality with a showman’s instincts who pursued right-wing populism during four years in the White House, awarded Limbaugh the highest U.S. civilian honor – the Presidential Medal of Freedom – during his 2020 State of the Union address to a joint session of Congress.

First lady Melania Trump placed the medal around his neck after her husband lauded Limbaugh as “a special man beloved by millions of Americans” and “the greatest fighter and winner that you will ever meet.” Illustrating Limbaugh’s divisiveness, some Democratic lawmakers were heard groaning “oh no” while House of Representatives Speaker Nancy Pelosi – one of his favorite punching bags – sat in stony silence.

Trump honored Limbaugh a day after the radio star announced his cancer diagnosis. Limbaugh at the time said he planned to continue to do his program “as normally and as competently” as he could while he underwent treatment. 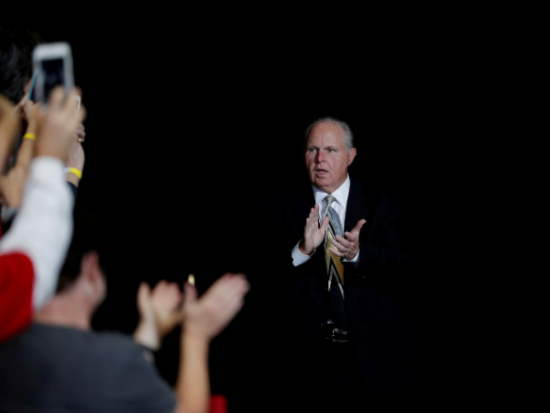 Talk show host Rush Limbaugh walks on stage on the eve of the U.S. mid-term elections at a campaign rally at the Show Me Center in Cape Girardeau, Missouri, U.S., November 5, 2018. REUTERS/Carlos Barria/File Photo

Speaking on Fox News on Wednesday, the Republican Trump said of Limbaugh: “He was very brave. He was fighting until the end.”

Republican former President George W. Bush said in a statement, “While he was brash, at times controversial, and always opinionated, he spoke his mind as a voice for millions of Americans and approached each day with gusto.”

Limbaugh had experienced a variety of medical problems over the years, including a loss of hearing reversed by a cochlear implant, as well as an addiction to prescription painkillers that landed him in rehab in 2003.

Limbaugh espoused an unflinchingly populist brand of conservatism during a daily show broadcast on more than 600 radio stations across the United States. He railed against left-wing causes from global warming to healthcare reform as he helped shape the Republican Party’s agenda in the media and mobilize its grass-roots supporters.

He ridiculed mainstream news outlets and relished the controversies often sparked by his on-air commentary. His success helped spawn a new class of right-wing pundits on the radio, television, and the internet, among them Bill O’Reilly, Sean Hannity, Glenn Beck, and Alex Jones.

Limbaugh called his followers “ditto heads.” He coined the term “femi-Nazis” to disparage women’s rights activists. Limbaugh in 2012 called a law student who spoke to a congressional hearing about birth control a “slut,” causing some sponsors to pull their advertising from his show.

More recently, Limbaugh promoted Trump’s false claims to have had the 2020 presidential election stolen from him through widespread fraud and irregularities. After Democrat Joe Biden was inaugurated as Trump’s successor last month, Limbaugh told listeners the new president had not legitimately won.

Limbaugh also compared the pro-Trump mob that stormed the Capitol in a Jan. 6 rampage that left five people dead and interrupted certification of Biden’s victory to the American colonists who rose up against British rule in the 18th century.

Limbaugh’s career, and talk radio in general, got a major boost in 1987 when the U.S. Federal Communications Commission repealed rules requiring broadcasters to provide equal time to both sides of political debates.

In the 1990s, Democrat Bill Clinton’s presidency gave him a fresh target for his ire and activism, and he claimed to have helped propel a Republican takeover of the U.S. Congress in 1994. Democrat Barack Obama became a regular target of Limbaugh’s criticism when he became president in 2009. When Obama won the Nobel Peace prize, Limbaugh called it an award given to “liberal sellouts.”