Tesla’s quarterly report on Wednesday could trigger a $7 billion options payout to Chief Executive Elon Musk, while owners of the electric car maker’s soaring stock are keen to hear the company’s target for 2021 deliveries.

Tesla posts its December quarter results following a nearly 700% surge in its stock over the past 12 months that has made it the fifth-most-valuable publicly traded U.S. company, eclipsing Facebook.

Despite production that is a fraction of that of Toyota Motor Corp, Volkswagen or General Motors, Tesla has become by far the world’s most valuable car maker, with a market capitalization of $843 billion, compared with Toyota’s $236 billion.

Its shares are trading at over 200 times the average analyst earnings forecast for the next year, according to Refinitiv, underpinning skeptics’ arguments that Tesla’s stock has become highly overvalued.

After Tesla delivered just shy of a Musk-promised 500,000 electric vehicles last year, investors are focused on the Silicon Valley manufacturer’s 2021 delivery target, expected to be provided on Wednesday.

“We’re expecting close to 900,000 deliveries. I think that as the economy opens up again, there is going to be pent up demand from people who want to spend some money,” said King Lip, chief investment strategist at Baker Avenue Asset Management in San Francisco, which owns Tesla shares.

Following the close of trading on Wednesday, analysts on average expect Tesla to report adjusted EBITDA of $2.3 billion, up 92% from the year-ago period. That would be enough to trigger the vesting of the fifth of 12 tranches of options granted to Musk in his 2018 pay package to buy discounted Tesla shares. 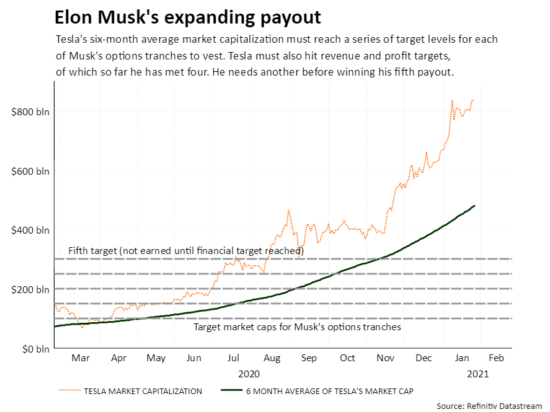 Musk, who is also the majority owner and CEO of rocket maker SpaceX, receives no salary at Tesla. His pay package requires Tesla’s market capitalization and financial growth to hit a series of rising targets.

Each tranche gives Musk the option to buy 8.4 million Tesla shares at $70 each, a discount of more than 90% from their current price. At Tuesday’s price of $889, the shares from four previous tranches and the current tranche could generate a profit of nearly $35 billion, or almost $7 billion per tranche. 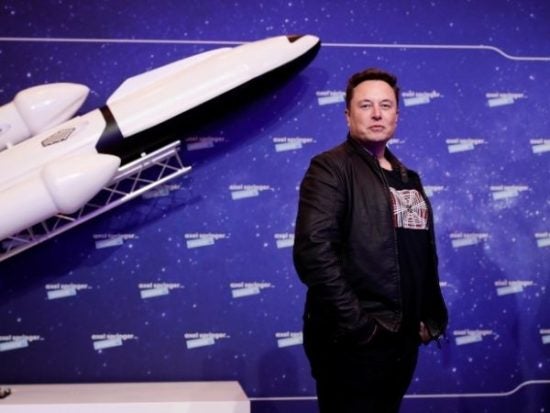 Investors will also look for updates on plants Tesla is building in Berlin and Texas, as well as the outlook for production of Tesla’s upcoming Cybertruck pickup.

For the December quarter, analysts expect Tesla to report revenue surging 40% to $10.3 billion and net income of $752.5 million, with adjusted earnings per share of $1.01, according to Refinitiv. In the previous quarter, Tesla’s profits came from selling pollution credits to other automakers, and it would have lost money if it only sold cars.