High Court gives Trump a do-over and DACA Dreamers, a gift of time

High Court gives Trump a do-over and DACA Dreamers, a gift of time 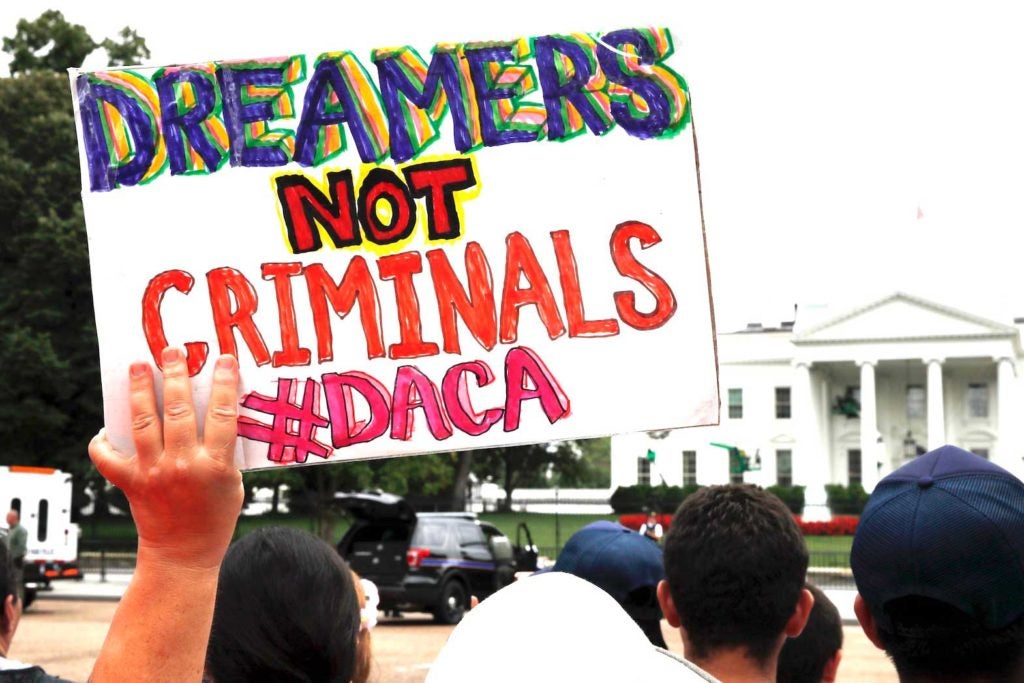 In this Aug. 15, 2017, file photo, a woman holds up a signs in support of the Obama administration program known as Deferred Action for Childhood Arrivals, or DACA, during an immigration reform rally at the White House. (AP Photo/Jacquelyn Martin, File)

You resilient but anxiety-ridden Dreamers, you nearly 800,000 recipients of the Deferred Action on Childhood Arrival (DACA) program, you deserve a celebratory fist-pump in these unsettling pandemic times.

So please feel free to let out a resounding, open-mouthed, full throated, tongue-to-the floor, very amok-like OMG shriek of joy in whatever way you find most appropriate.

Simply emulate the reaction all your friends and relatives  exhibited  when the news broke that the Supreme Court ruled 5-4 that the Trump administration had fumbled its chance to deport all the Dreamers before the 2020 elections.

I’m thinking about Cheska Mae Perez, a 22-year-old Filipina who was brought to the U.S. by her parents when she was just six years old. It’s the standard story. She didn’t have a choice.

Perez entered legally when her father, like so many others from the Philippines, couldn’t find work to support his family there. So he found a job in America and brought the family to the U.S.  on a work visa. But when he left his job, his visa ran out, and so did the legal protections for Perez and her family.

Because of DACA, Perez has been on her own since age 18 and living the life of a Dreamer. She developed an app to help young people find college scholarships.  She won a scholarship herself and graduated from one of the top national liberal arts colleges in the country. And now she works in Washington, DC for a non-profit advocacy group.

And yet Donald Trump would have no problem deporting Perez, an example of the American values the country has lost these last four years.

As long as it helps him win in November. That’s his focus. Not DACA, but rather his weekend rally to kick off his campaign to  “Make America Sick Again.”

That’s what makes the Supreme Court ruling this week on DACA peculiar. If Trump is so hell bent on getting rid of DACA it’s simple. Follow the law. He didn’t.

“We do not decide whether DACA or its recission are sound policies. The wisdom of those decisions is none of our concern,” Roberts wrote in his opinion. “We address only whether the agency complied with the procedural requirement that it provide a reasoned explanation for its action.”

The reason the conservative Roberts joined the liberals is not because of policy, but because of the rule of law. And clearly in his view, the Department of Homeland Security  didn’t follow the procedures to properly end DACA.

Said Roberts: “Here the agency failed to consider the conspicuous issues of whether to retain forbearance and what if anything to do about the hardship to DACA recipients. That dual failure raises doubts about whether the agency appreciated the scope of its discretion or exercised that discretion in a reasonable manner. The appropriate recourse is therefore to remand to DHS (Homeland Security).”

In a golf term the president might understand, Roberts gave the administration a legal mulligan. A do-over.

And that provides another aspect of the “big but.”

The decision is a win for Dreamers, but now Trump’s DHS knows exactly what procedures to follow to get rid of DACA properly in the court’s view.

If DHS does so, and the case  goes to the SCOTUS again, will Roberts be back with the OTHER four– the conservatives–to allow the death of DACA?

And that’s why the victory today is sweet. But only lasts as long as a roll of Lifesavers.

Will Trump listen to SCOTUS?

If Roberts is right, the Trump administration will have to decide.  Go back and do things the right way by following the law? Doesn’t sound very Trump like.

Remember, Trump prior to being elected was supportive of Dreamers, then switched to appeasing his hardline pro-white/anti-immigrant base.  It’s yet another example that proves the assertion from John Bolton’s new book:  Trump puts his re-election above the nation’s interests.

So considering the polls show the  public has shifted and become pro-Dreamer, and that the cost to get rid of them may be too steep in a struggling economy (Moody’s chief economist Mark Zandi put the impact of the loss of DACA on our GDP at $105 billion), and that the Dreamers are actually the kind of immigrants Trump wants to allow in (educated and productive), Trump may just let things lie until after the election.

He doesn’t want DACA politics to screw up his campaign. He also prefers the moral flexibility to have it both ways. So naturally, his response is to blame others.

In his first tweet after the morning decision, the president was quick to blame the court and then shift focus to rally his base, saying the SCOTUS decision shows  how  Second Amendment gun rights could be endangered!

So the Dreamers have the gift of time. They’ve been correct all along by making their long term strategy getting legislative action by Congress. Perez mentioned that when I talked to her back in 2017.

Dormant legislation to save the Dreamers does exist.  The American Hope Act of 2017 is one solution. But are the votes there?  Mobilizing key districts to transform the House and Senate in November should be a priority.  If that happens, I see DACA and the Dreamers set to become a bigger issue in 2020 than we might have imagined. It could make things very uncomfortable for Trump.

In the meantime, people who are eligible for DACA can and should be able to apply to extend their stays legally. Or maybe you are one of so many Filipinos, who were brought to the U.S.  while young, and were always  eligible for DACA, but for some reason  were too scared to come forward even to apply. Don’t be scared now.

The political winds may be blowing the right way again. At least for the moment.

After George Floyd, there seems to be some willingness to confront racial inequities throughout society. Dreamers should not be overlooked in this broad assessment. They have always been innocents caught in the drama of race politics.

Just understand this SCOTUS ruling is a victory, but it does not resolve a thing.

SCOTUS made things right on procedure and rule of law.  Congress will have to make it right on policy.

Emil Guillermo is a journalist and commentator. Listen to his podcasts on amok.com. Twitter @emilamo