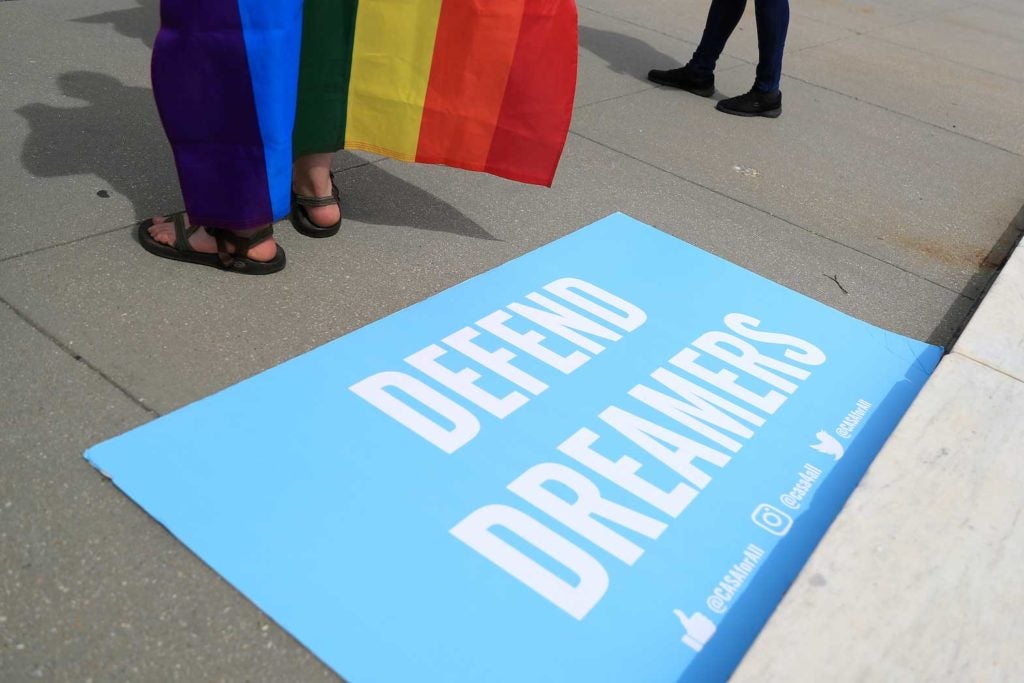 A sign in support of DACA Dreamers lies at the steps of the U.S. Supreme Court after the court declined to hear a Trump administration challenge to California’s sanctuary laws, in Washington, D.C., U.S., June 15, 2020. REUTERS/Tom Brenner

WASHINGTON – The U.S. House of Representatives on Thursday passed bills providing a pathway to citizenship for immigrants nicknamed “Dreamers,” who are living illegally in the United States after entering as children, as well as for a large number of immigrant farmworkers.

The two measures now go to the deeply divided Senate where they face a difficult climb.

By a vote of 228-197, the Democratic-controlled House passed the Dreamers bill with only nine Republicans supporting it. The legislation would allow Dreamers to live, work, serve in the military and continue their educations without the threat of deportation and to eventually win U.S. citizenship if they meet a set of requirements

The House then approved the farmworker bill, 247-174, to shield about 1 million immigrant laborers, many of whom have been in the United States for decades, from deportation.

The legislation coincides with Democratic President Joe Biden’s efforts to contain the number of migrants arriving at the U.S.-Mexico border, many of whom are fleeing dangerous conditions in Central America.

Many Republicans attacked the Dreamer legislation, saying the southwest border needed to be secured before taking any new steps on immigration reforms.

Dreamers, numbering around 1.8 million young immigrants, made the dangerous journey on their own, with parents or hired hands, often to escape gang violence in Honduras, Guatemala, El Salvador and other countries.

Many have spent most of their lives in the United States and have been educated in U.S. schools.

During Thursday’s debate over the Dreamer bill, Democratic Representative Pramila Jayapal noted she came from India to the United States alone at the age of 16, saying, “Let’s stop the hypocrisy of criminalizing immigrants.”

But Republican Representative Chip Roy said Democrats were doing “nothing to address cartels who have ownership of our border right now” and are pushing legislation that would prove to be “a magnet for traffic of more children.”

The White House backed both bills. But it also urged lawmakers to adopt broader reforms in Biden’s sweeping immigration bill introduced last month, saying this would secure the border and “address the root causes of instability and unsafe conditions causing migration from Central America.”

Biden’s wide-ranging plan would provide a path to U.S. citizenship to the 11 million immigrants in the country illegally. The Senate’s No. 2 Democrat, Dick Durbin, said this week that goal does not have enough support in the House or Senate.

“We can’t keep waiting,” Biden wrote on Twitter. “I urge Congress to come together to find long term solutions to our entire immigration system so we can create a safe, orderly, and humane immigration system, tackle the root causes of migration and legalize the undocumented population in the United States.”

The bills passed Thursday got a boost from the U.S. Chamber of Commerce, the nation’s largest business lobbying group, which cited worries over immigrant workers’ “uncertain future.”

It also noted that American workers employed at businesses established by Dreamers would gain job security from the legislation and that visa improvements for agriculture workers would help U.S. operations with year-round labor needs, such as dairy farms.

The Dreamers bill also would help a separate group of immigrants, who came from countries that were devastated by civil wars and natural disasters, and had qualified for temporary protections in the United States.

Court rulings and the Biden administration have kept DACA alive, at least for now.

Senate Republican Leader Mitch McConnell panned the House efforts on Thursday, saying they would exacerbate problems at the border, further dimming prospects in that chamber, where a supermajority of at least 60 of 100 members are needed for most legislation to advance.