Can an Asian American win? 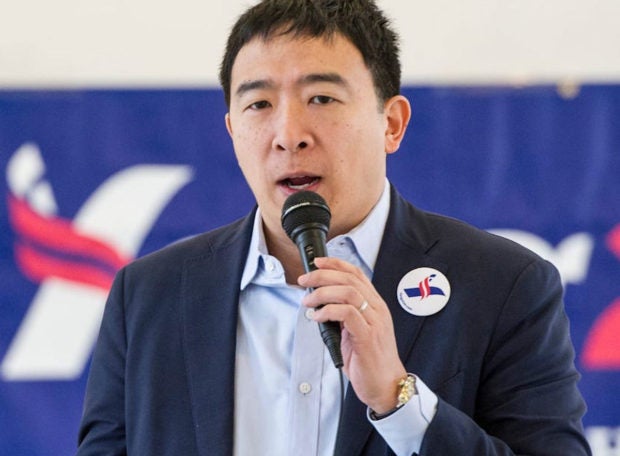 When I think of Iowa, I think of a time in the 1940s. Filipinos who had married Japanese women in California and had children tried to escape the WWII internment camps for Japanese residents on the West Coast by arriving en masse to Iowa.

The historian Alex Fabros showed me the headlines of the day. What did Iowa say to the Asian American Filipino/Japanese families?

Just one of the things I was thinking when the Democrats debated on Tuesday, though I admit I actually missed Andrew Yang.

That Iowa Democratic debate was so frustrating if the only “moment” that got people excited “moment” was whether Bernie Sanders really said that a woman can’t win.

Sanders flatly denied saying it, despite all the reporting on the story to the contrary.  And the story has legs as Sanders and Elizabeth Warren exchanged some heated words after the debate, one calling the other a liar.

Still, in an era where the current president has lied more than 15,000 times since taking office, is this the “gotcha” that really matters?

A bigger deal for me would have been if Bernie had said “an Asian American couldn’t win in 2020.” Or a Filipino American.

And in 2020, we had a few Asian American, or part Asian American, candidates. One who got lost in the cornfields (Kamala Harris), one still trying to be present (Tulsi Gabbard), and one who still wants to give you $1,000 a month (Andrew Yang).

Had Sanders mentioned Yang, it actually would have been a public service as an honest, realistic assessment on where Asian Americans stand, not just in politics, but in society today.

We’re still nowhere. Like we need that report card? Well, we need to be reminded of our longshot status.

Certainly, it would have been news to the #YangGang enthusiasts.

And if you’re a Filipino who doesn’t like the “Asian American” label, all I can say is politically with the broader label you’re more than 21 million.

As a POFA…a “Plain Old Filipino American,’ you’re at around 4 million. Pick the bicep you want to flex. And sad to say even at that, we aren’t that strong.

That should be news to all Asian Americans who assume we are on equal ground and capable of doing anything. Anything? Oh, yeah, just not the presidency.

The fact that an Asian American can’t get elected president should be our broader community’s race benchmark going forward.

Model minority, right? Asian Americans have had success in politics and in business. But does the public see us as their national leader? Could we even attract broad support? And if not, why not?

It used to be said that WWII had some impact on our acceptance. Could Americans consider Asian Americans as candidates if they remembered Hirohito? With the greatest generation passing, will a new generation be any different if Chinese academics are seen as spies in university laboratories, or as Trump bashes China as trade adversaries?

And yet, white Americans pay to see movies with the Rock (part black and Samoan). They idolized Bruce Lee. They made “Crazy Rich Asians” a big summer hit. They go to the homogenized Panda Express and PF Chang’s. Maybe a Jollibee?

But give us a vote for president? Would politicos really rather see Donald Trump, TIP (for “the impeached president”) back in the White House?

What does that say about being an Asian American in 2020?

Iowa so white
Iowa is such a strange first state to kick off the political season. Ninety-one percent white. An America that looks like the 1850s. For as long as I’ve been writing columns during election seasons (since 1984), it’s always been worth pointing out. Now everyone sees it and they still don’t care.

Last December, a woman on meth ran over a child with her car because she thought the child was Mexican. That was in Clive, Iowa, a town I know well after my car broke down there last summer.

No one rolled out a welcome mat. Not even the Catholic Church. Not exactly getting run over by a meth head. But the sentiment is clear.

I didn’t belong. So maybe that’s why we didn’t hear a lot about immigration issues, or people of color issues, or inclusion this week.

Warren’s closing statement talked about all the things that got left out:

So much is broken in this country. I sat here in the break and just made notes about many of the things we didn’t get to talk about tonight: how the disability community is struggling for true equality; how gun violence and active shooter drills worry every mother in this country; how children are living in poverty and seeing their life chances shrink; how transwomen, particularly transwomen of color, are at risk; black infant mortality; climate change that particularly hits black and brown communities; people who are being crushed by student loan debt; farmers who are barely holding on; people struggling with mental illness.

Until we all count, we have to translate the generic debate into what it means for us.

For example, in the health care debate, no one talks about the rates of hypertension and high blood pressure in the Asian American community generally, and the Filipino community specifically. Your diet is killing you.

Complain about co-pays and deductibles in health insurance all you want. But before waiting for some pipe-dream government solution, moving toward a low-sodium, low-fat, plant-based diet would do more for you than any plan from Bernie, Liz, Biden or Buttigieg. Or the gutted Obamacare plan Trump wants to give you.

Time to start caring for our own. I finally did. I got my first check-up in three years.  My cholesterol is 155. Near heart attack proof.

I will definitely outlive Trump. In the meantime, the impeachment trial is starting up.

I will not have a heart attack if the Senate Republicans decide they want the truth about Trump and his corruption.

With all the new evidence that’s arrived about Giuliani and his Ukrainian henchmen trying to dig dirt up for Trump with the president’s knowledge, it only stands to reason the process should open up with more witnesses and documents.

We deserve a fair trial. We probably won’t get that.

Unless someone stands up for democracy, the Constitution, and what we know as the “American Way,” we’ll likely have as boring a TV experience as the Iowa debate.

Now just imagine if Trump were Filipino or an Asian American president. I doubt the Senate would be so blindly loyal. He certainly wouldn’t have white privilege, which is all that is saving Trump right now. Without that he’d be removed in a second. No debate. And everyone would cheer.

Emil Guillermo is a journalist and commentator who was host of NPR’s “All Things Considered” in Washington, DC. He writes a column for the North American Bureau of the Inquirer.net. Twitter @emilamok. Listen to him on Apple podcasts.