History will not acquit Trump

History will not acquit Trump 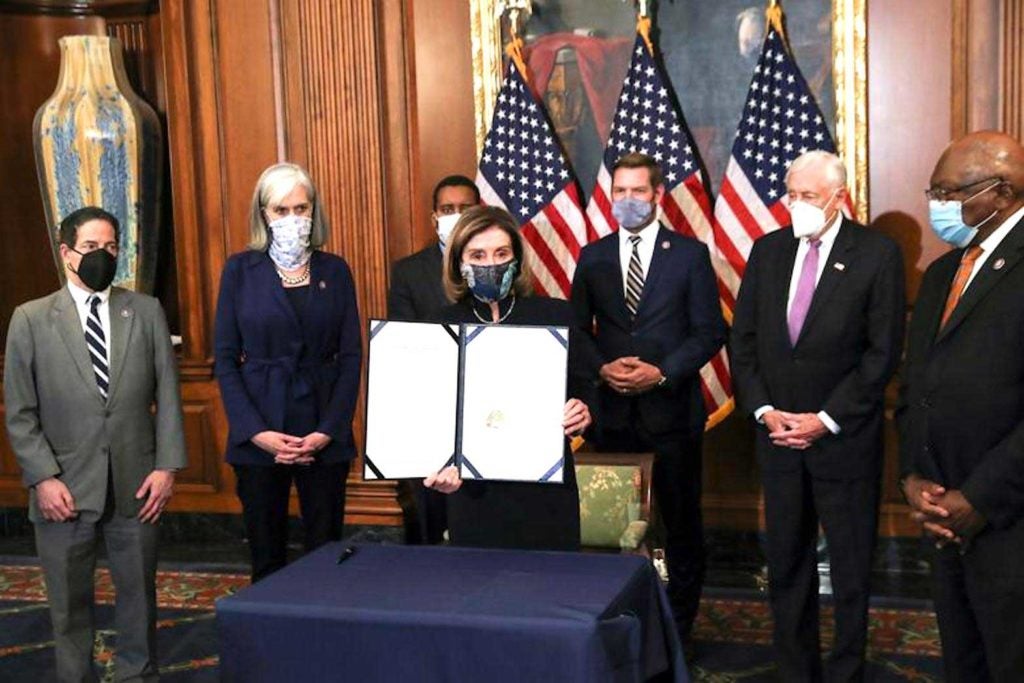 U.S. House Speaker Nancy Pelosi (D-CA) shows the article of impeachment against U.S. President Donald Trump after signing it in an engrossment ceremony, at the U.S. Capitol in Washington January 13, 2021. REUTERS/Leah Millis

Filipino Americans are “politically-speaking” Asian American. So it was good to see Rep. Ted Lieu as a House Manager for the second impeachment. And Sen. Mazie Hirono was there to vote to convict. The diverse Democrats led by Rep. Jamie Raskin, did a great job in presenting the case for truth. But it appears that nothing will put an appropriate close to the nightmare in American democracy known as Donald J. Trump.

I’m wondering where Trump ends up when his luck finally runs out. Ferdinand Marcos, the former Philippines president and dictator, ended up exiled in Hawaii when he got run out of his homeland. Does Trump end up in a Moscow penthouse playing VR golf?

For now, ex-president 45 remains appropriately Twitterless in Mar-a-Lago, hitting his white ball into a cup while figuring out how to continue his cynical control over Republicans in Congress.

He does so because people who don’t really belong in public office want whatever Trump’s got.

We should all be shining a light now on Senators Ted Cruz, Josh Hawley, and the other 41 Republicans who not only voted against certification of a real election that Trump lost, but wouldn’t vote to convict Trump for inciting a riot.

That’s the real shame. Because we all saw what happened Jan. 6 when Trump had his knee on the neck of the Constitution and American political life.

And he continues to do so because every politician, at least on the Right, wants Trump’s blind followers—the ones who believe in conspiracy theories and misinformation. It’s become the new quest for politicians—to recover those 74 million Trump voters. It’s like a search for buried treasure in politics–the key to power.

That’s why Cruz, Hawley and the other GOP members didn’t vote for the truth on Saturday. They want to be the next Trump, just new and less orange. So they kept up the big lie (that the election was stolen from Trump) with a slightly less big lie (that Trump didn’t incite the insurrectionists).

It will work for now. But not for long.

At some point, the GOP as a whole will have to deal honestly with the American people. Maybe it will happen when more of the people who stormed the Capitol on Jan. 6 get arrested, put through the justice system, and find they don’t get the Trump treatment. No one will treat them like Trump because they don’t have 74 million votes like Trump got.

But you’re one of the 74 million, you say, who voted for Trump and only half believe in QAnon. Sorry, Trumpster.

Maybe then, truth will win out.

Or maybe it will be when there’s a 9/11 style commission and all the facts come out about Jan.6. Or when Trump loses in any future criminal and civil proceeding.

For now, we have a truth-challenged country immobilized by the GOP, where the Cruzes and Hawleys of the world won’t convict Trump. But Sen. Chris Coons (D-Delaware) told ABC News that if there were a secret ballot, he was “fairly certain” there would have been a vote to convict.

But there wasn’t a secret ballot. That wouldn’t be a democracy.

Which leaves us with the spectacle of Sen. Mitch McConnell, the Senate Republican leader, to define a new level of two-facedness in our modern political era.

He didn’t vote to convict the ex-president in the second impeachment, but found in his closing remarks some time to break from his cowardice in order to denounce Trump for being “practically and morally responsible” for what happened.

It’s political speak. Too bad what’s good for politicos is bad for the American people.

If you didn’t pay attention to the second impeachment trial, I can’t blame you. Makes you want to ignore government, doubt your country, because what’s it got to do with you, right?

But you should care.

Because it’s your government too. And it’s easy to let our reps take care of things for us. But start to care. Political style and actions get copied. Trump is like the speeding drunk driver who never gets caught. When he gets away with things, other people in life, not just politicians, start modeling the Trump way of “success.” They say, “ If he does it, why can’t I?” It’s lies on top of lies. The art of the steal.

It’s the sort of thing that rips apart what they call the fabric of American life. Especially when it costs us trust in our democracy’s institutions. Trump’s four years were like an audition for a real American autocracy, right at the doorstep of martial law.

There are some who are still hoping it happens. That’s why the barbed wire stays up.

It’s even unfortunate that a fair number of those who think like the Republican Trump backers are Filipino Americans.

But make no mistake, the good and the truth still win out. It has to. We’ve got to believe that as the ideal. Or we lose the moral basis of our democracy and the reality that we live in a society where truth and justice matter. Ultimately, history catches up with our deeds.  That’s when the Truth wins, and the “victory” of a double acquittal in the Senate sours into the reality of the House’s double impeachment.

For  now, we’re still working it out in the present day  because the Republicans want what they believe Trump has-–74 million voters who just can’t handle the truth.

Emil Guillermo is a journalist and commentator. He writes a column for the Inquirer’s North American Bureau. His podcast, “Emil Amok’s Takeout,” and his vlog are at www.amok.com