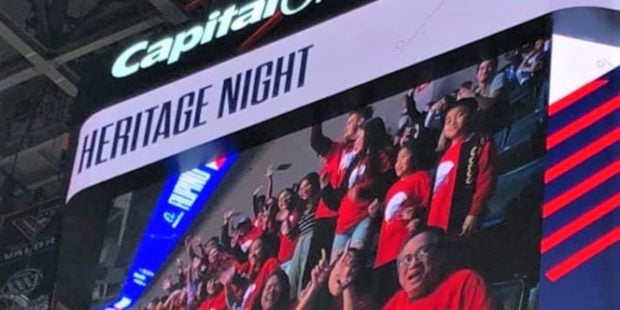 The Jumbotron at Capital One Arena shows cheering fans, including Filipinos and Filipino Americans from the DC-Maryland-Virginia area. This year’s attendance was the largest ever in the eight years of Filipino Heritage Night. MANILA MAIL

WASHINGTON — A large contingent of Filipino immigrants and Filipino Americans from Washington DC, Maryland and Virginia thronged to the Capital One Arena on Saturday, January 4, to celebrate the 8th Annual Filipino Heritage Night and to cheer the Washington Wizards who handily beat the top-ranked Denver Nuggets, 128-114.

It was a fun filled day, with 10 local teams playing in exhibition games from mid-afternoon to six in the evening, before game time.

It was also an opportunity for fans to get up close with their favorite Wizards and Nuggets players.  Some were lucky enough to have their pictures taken and get autograph signatures. This writer was able to pose for a picture with retired Romanian professional basketball player, Gheorghe Muresan, who used to play for the Washington Bullets (now the Wizards). At 7 feet 7.5 inches, he is the tallest player ever to have played in the NBA.

A number of kids got to high five the Washington Wizards players when they came out of the tunnel onto the court for warm ups. 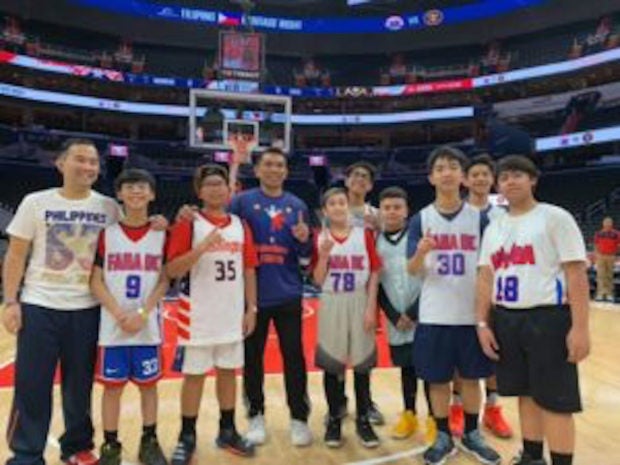 Before the game started, fans listened to TOFA NYC performance artists and singers sing the Star-Spangled Banner in front of at least 20,000 spectators.  Twelve lucky kids stood behind their favorite players while the National Anthem was being played

At halftime, the arena came alive with a much-awaited treat: A celebration of Filipino Heritage Night. The Migrant Heritage Commission’s (MHC) Dance Ensemble of Fairfax, Virginia led by Grace Valera, and the Richmond Pilipino Class (RPC) Performing Arts from Central Virginia led by Dr. Maria Cielo Sinsioco, impressed the crowd with their lively performance of “Ati-Atihan,” “Sinulog,” “Tinikling” and a dazzling demonstration of Arnis, also known as Kali or Eskrima, the national martial art of the Philippines.

The special performance was a joint choreography of MHC’s Dennis Michael Hona and RPC’s Ludwig Osorio. Both groups are multi-awarded service-oriented organizations promoting the best of Filipino culture for the past 15 years.

“It gives us a sense of fulfillment to have our community united and working together.  Having this high-profile event in front of 20K plus people and seeing their appreciation of what our community can offer to the mainstream is a great source of pride,” Mendoza said.

This year’s game night was the most well attended by the Filipino community and other groups in the Metropolitan DC area.

Mendoza initiated this effort in 2013.  He knew that NBA teams such as the Los Angeles Lakers and Golden State Warriors have been doing Filipino Heritage Nights for a number of years.

He introduced the same idea to the officers and Board of Directors of FABA in 2012.  The following year, all agreed it would be a great to be the first to celebrate Filipino Heritage Night in the East and also in Midwest, and most especially in the nation’s capital.

Mendoza communicated with officials of the Monumental Sports and Entertainment firm and both parties agreed to make things happen. As they say, the rest is history.

For Grace Valera, a former Cultural Officer of the Embassy of the Philippines and one of the executive directors of the Migrant Heritage Commission, she considers their participation in Filipino Heritage Night as “an opportunity to share the beauty, colors and vibrancy of the Filipino culture. It will always be a perfect venue for increasing our visibility knowing that there are over 20,000 people in the audience, including over a million viewers on TV and social media all over the world.”

According to Valera, more than half of the performers are US-born Filipinos. “It’s their way of connecting back to their Filipino roots and heritage.” 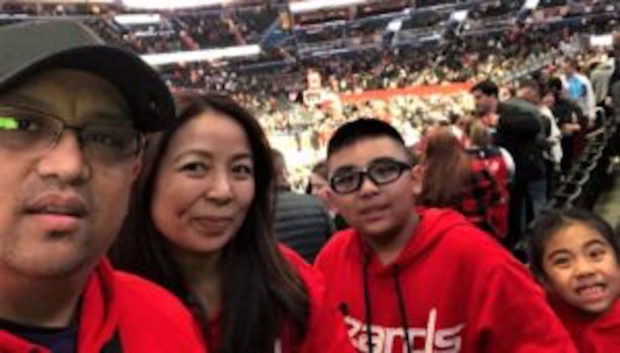 Ron Sagudan, his wife Liza, and their children Dylan and Dyanne are among the thousands of fans cheering their home team. MANILA MAIL

Magge Cabatuando, one of the dance performers, describes her experience as “a dream come true. I can’t believe that one day I will be inside an NBA basketball court and performing in front of a million viewers globally.”

It was the first time for Filipino American nurse Jerlin Cabangal Harbort to attend a special event for Filipinos inside the Capital One Arena.  “It made me very proud to showcase our country and culture for a brief period of time, for five minutes!  I felt goosebumps as soon as the thumping of the drums started,” she gushed.

Juliette Barredo, the executive director of Veterans Pantry, said she feels “lucky to be a part of the day’s festivities.  Seeing the Filipinos perform with grace and dedication was a high moment for me.  I give credit to the organizers and performers who have spent days and days of preparation.”

Yvonne Inventor Taneza, the reigning Mrs. Migrant Heritage Queen and one of the dancers during the half time show, said “it’s an honor and privilege that will stay with me for the rest of my life.  There is so much positive energy when we volunteer to come together and show the world what makes us a great community.”