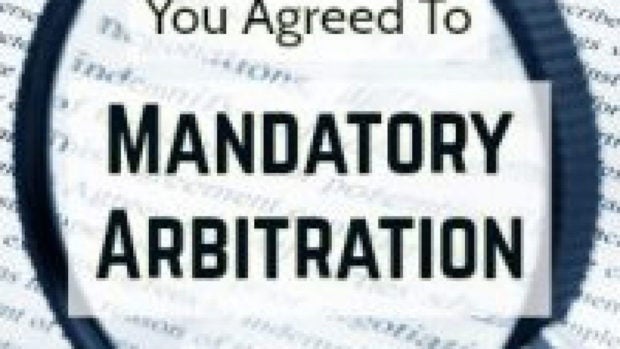 Q:        I was recently hired for a job and was asked to sign an arbitration agreement. I was told that signing the agreement is “voluntary” but when I asked if I could just skip it, the HR person said “did you want to keep working for the company?” I took that to mean that I could not keep working there if I refused to sign. I was not allowed to take the agreement home with me to read. Since I wanted to keep my new job, I signed. Do I have a right to refuse to sign in the first place?

To recap, arbitration is a procedure to resolve disputes without filing a complaint in court. The disputing parties refer the case to a third party (the arbitrator) who makes a decision that is legally binding on both sides. By signing an arbitration agreement, the employee agrees to resolve any claim against the employer before an arbitrator and not before a judge or a jury. This means the employee cannot file a lawsuit in court to resolve the claim.

Court proceedings are public, with the case being heard either by an impartial judge or an independent jury. An arbitration proceeding is a private process in which an arbitrator is hired by the parties to make a decision regarding the dispute. Arbitrations are paid by the hour, either by one or all of the parties. The process and its results are generally not disclosed to the public. The parties are bound by the arbitrator’s decision and the losing party cannot appeal.

Many studies regarding arbitration outcomes show that they favor the defendants and defense firms that pay the bills. Arbitrators are not required to follow the law, and there is little opportunity to appeal an arbitrator’s ruling.

The new law, Assembly Bill 51 (AB 51), prohibits employers from requiring employees, as a condition of employment, to waive any right, forum, or procedure when seeking redress for a violation of any California labor law. Employers also cannot require employees to agree to this waiver as a condition of continued employment, or to receive any employment-related benefit. Furthermore, employers are prohibited from threatening, retaliating or discriminating against, or terminating any employee because of the refusal to consent to the waiver of any right, forum, or procedure. In short, AB 51 prohibits mandatory arbitration agreements for any discrimination claims covered under FEHA and for any claims under the Labor Code, including wages and other employee protections).

The uncertainty with AB 51 is that courts may refuse to uphold it because it will likely contradict the federal law known as the Federal Arbitration Act (FAA). The FAA was enacted in 1925 by Congress to ensure the validity and enforcement of arbitration agreements. State laws attempting to obstruct/prevent/discourage arbitration have been repeatedly struck down by the U.S. Supreme Court. Even though AB 51 only targets “mandatory” arbitration agreements (suggesting voluntary agreements are okay), courts have a history of upholding forced arbitration agreements so long as they meet specific fairness criteria.

Regardless of the uncertainty, arbitration agreements must still abide by the standards of mutuality and fairness. It must provide for a neutral arbitrator, and allow all forms of relief that would be available in court. The parties should have the opportunity to conduct reasonable fact-finding and that no additional costs are borne by the employee other than those accrued in bringing the claim in court.