Well-rested Kawhi Leonard scored 18 of his 27 points in the fourth quarter as the Los Angeles Clippers beat the Portland Trail Blazers 101-107 Thursday in the NBA.

Leonard’s night off against the Milwaukee Bucks on Wednesday didn’t appear to be paying dividends as he got off to a slow start against the Trail Blazers, scoring just seven points in a first half in which Lou Williams’ 14 points helped the Clippers take a 47-40 lead into the interval.

Portland out-scored Los Angeles 36-23 in the third quarter to take a 76-70 lead into the fourth — when they briefly pushed the advantage to eight.

"When there is pressure, we did not break" #KawhiLeonard on the Clippers' performance against Portland pic.twitter.com/9rpcQevM8e

The Clippers held on, Leonard’s pull-up shot with 2:40 remaining putting them up 94-93.

The Clippers wouldn’t trail again, and Leonard drained four straight free-throws to close it out, giving coach Doc Rivers the 900th victory of his career.

“When the pressure came, we didn’t break, we just kept pushing,” said Leonard, who was the focus of attention after sitting out the Clippers’ loss to reigning Most Valuable Player Giannis Antetokounmpo and the Bucks.

Highlights from a nail-biter in DTLA.

His absence, to manage his workload in view of a sore knee, was backed by the league.

But hours before tip-off on Thursday, the league fined the Clippers $50,000 for contradictory statements on Leonard’s fitness.

In announcing the fine, the NBA said they still thought Leonard’s absence Wednesday conformed to league rules, but officials were irked that Rivers told reporters that it was “not a healthy thing really.”

“I feel good — we just won a basketball game,” he said.

Elsewhere, Boston guard Kemba Walker scored 14 points in an emotional return to Charlotte Thursday as the Celtics notched their sixth straight NBA victory, 108-87 over the Hornets.

Walker, who was clearly moved by a video tribute from the home team, connected on just four of 12 shots from the field — missing his first six shots before he scored his first field goal early in the third quarter.

Despite his struggles, Walker called it an “amazing night” in Charlotte, where the three-time All-Star played eight seasons and became the Hornets’ all-time leading scorer. 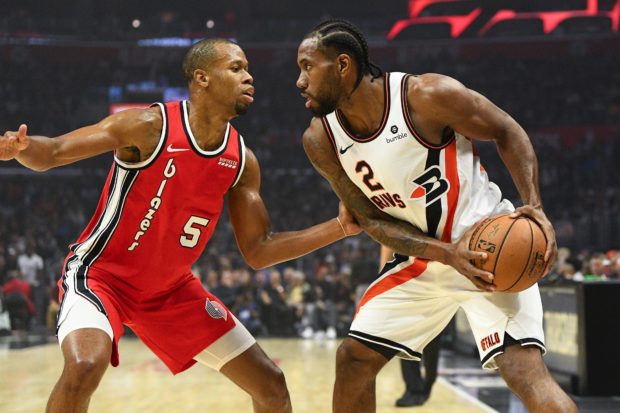 Walker signed with the Celtics in the off-season after the Hornets, owned by NBA icon Michael Jordan, opted not to give him a five-year, $221 million supermax contract.

“I was trying to hold it in,” Walker said of his reaction to the tribute video — and a standing ovation from Hornets fans.

“I told myself I wasn’t going to cry but I couldn’t hold it in.

“I knew there was going to be a video but I didn’t know what to expect.”

The Celtics ended the Hornets’ three-game winning streak as they won their sixth in a row.

Boston will try to extend their winning streak when they visit the San Antonio Spurs on Saturday.

The Spurs defeated the Oklahoma City Thunder 121-112 on Thursday behind 39 points from LaMarcus Aldridge, who connected on 19 of his 23 shots from the floor.

In Phoenix, Miami’s Jimmy Butler scored 30 of his 34 points in the first half and Goran Dragic added 20 in the second half to lead the Heat to a 124-108 victory over the Suns.

MOST READ
usa WWII surrender of Corregidor, the rock wasn’t that solid
usa A first look at Chris Brown’s new album, ‘Breezy’
usa Two Filipinos in Hawaii nabbed for allegedly stealing $260 worth of fruits
usa PH-born teacher named among ‘the best in New York’
usa 6 Best Whitening Toothpastes That Will Make Your Smile Shine
usa Is it game-over for TikTok? US FCC commissioner wants Apple and Google to remove the app
usa A first look at Chris Brown’s new album, ‘Breezy’
DID YOU KNOW?
Top 12 Resorts in Puerto Rico for 2022
5 Best Noise Cancelling Headphones of 2022
The Shakti Mat: Does It Really Work?
12 Best Travel Cameras to Capture Every Moment in 2022
Top 10 Best Fitness Trackers on Amazon
How to Shop for Engagement Rings Without Breaking the Bank