Five months after a jury convicted Kellen Winslow Jr. of raping a homeless woman, the former NFL player is returning to court to be retried on rape charges involving other women, including a 54-year-old hitchhiker and an unconscious teen in 2003.

The jury in June found him guilty of the attack last year on the homeless woman in his picturesque beach community of Encinitas, north of San Diego.
Jurors also convicted him of two misdemeanors — indecent exposure and a lewd act in public — involving two other women.

But jurors said they were hopelessly deadlocked on the other criminal charges, prompting the judge to declare a mistrial.

The 36-year-old former tight end — at one point one of the highest-paid in the NFL — has pleaded not guilty to the charges.
His attorney, Gretchen von Helms, said the sex was consensual.

Five women took the witness stand this summer, and three of them are expected to testify again.

Defense attorneys attacked the credibility of the five women and pointed out inconsistencies in their stories in the first trial.

The court will allow the new jury to hear that Winslow was convicted of raping the homeless woman.
She will be among those testifying again because Winslow is being retried on a sodomy charge involving her, according to the prosecution.

Jurors will also be told about the indecent exposure conviction, though that woman is not expected to take the stand this time, nor will a woman in her 70s whose testimony led to the other conviction for a lewd act that occurred in front of her at their gym, according to the prosecution.

The remaining charges include six felonies including kidnapping, sodomy, forced oral sex, two counts of rape and an additional count because the woman, who was 17 at the time of the 2003 attack, was also unconscious. 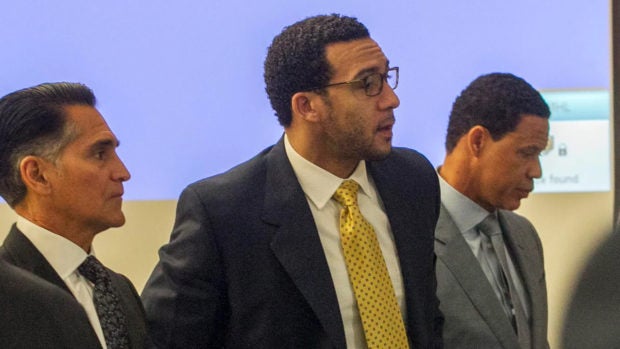 If convicted of multiple accounts of forcible sex offenses, Winslow would face up to life in prison.
The single conviction carries a maximum sentence of nine years.

Winslow, who played for Cleveland, Tampa Bay, New England, and the New York Jets, earned more than $40 million over 10 seasons in the NFL.
He is the son of Chargers Hall of Fame receiver Kellen Winslow, who was in the courtroom throughout the first trial.

The defendant did not testify at his first trial, and his attorneys said they have not decided yet if he will at the retrial.

He has been held in custody and will be sentenced for the rape conviction after the second trial.