The Washington Nationals will attend a White House reception on Monday, just over a week after the baseball team’s fans booed President Donald Trump during his World Series appearance at Nationals Park.

For the first time in 95 years, the #WorldSeries champions are from Washington, DC.#STAYINTHEFIGHT pic.twitter.com/wxYc9XbQYo

Trump has had an uneasy relationship with the sports world since taking office, with several championship-winning teams including the NBA’s Golden State Warriors and the NFL’s Philadelphia Eagles opting to skip the tradition of visiting the White House after their victories.

Most recently, Trump crossed swords with the World Cup-winning US women’s soccer team, clashing publicly with star Megan Rapinoe during the tournament.

Although Trump has not formally extended an invitation to the team yet, Rapinoe said after the squad’s victory she would boycott any reception.

The Nationals received their White House invite after clinching a dramatic World Series finale in game seven in Houston on Wednesday.

Last Sunday however, Nationals fans had rounded on Trump when the US leader attended game five at Nationals Park.

After the game’s third inning, the stadium’s video display showed military members in attendance — but then quickly cut to Trump.

The cheering crowd immediately switched to loud and sustained boos. 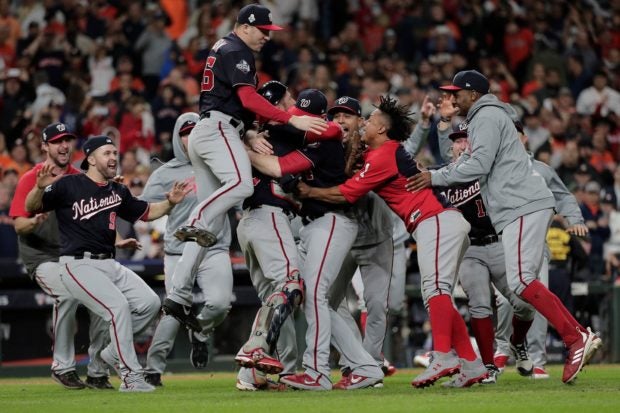 When the display cut back to the soldiers, the booing died down, but fans soon took up a chorus of “Lock him up!” — a play on the chant frequently heard at pro-Trump rallies against Hillary Clinton.

Demonstrators sitting behind the home plate also unfurled “Veterans for Impeachment” banners during the game, in reference to the House of Representatives investigation into whether Trump abused power by withholding military aid to Ukraine.