In 2002, Andrew Kolodny, a resident in psychiatry, attended a training session on pain treatment in Philadelphia.

Seventeen years later, he still shakes his head over the surprising enthusiasm of the lecturer, an authority on the topic, for prescribing opioids.

“The message was that people are suffering because of an overblown fear, and the correct and compassionate way to treat pain is to prescribe aggressively,” Kolodny recalled.

The lecturer, Thomas McLellan, had shown the class a short film examining the case of a man seeking relief from chronic back pain. The patient had been prescribed a strong regimen of OxyContin, the pain medication produced by Purdue Pharma — but he wanted more, complaining of crippling agony. After the film, McClellan asked the doctors in the class for their diagnosis.

“For me and for most of the people in the room, the obvious diagnosis was that this patient became addicted to their medicine,” said Kolodny, who is now the co-director of opioid policy research at Brandeis University’s Heller School in Boston.

“The surprise was that the person teaching the class said it’s not a true addiction.
It’s pseudo-addiction.” McLellan insisted the problem facing the seemingly addicted patient was that he was not getting enough drugs, Kolodny recalled.

At the time, the concept of “pseudo-addiction” was being advanced by Purdue Pharma and other laboratories to promote their opioid products.

OxyContin, an anti-pain medication similar to morphine, was introduced to the American market in 1996 with a campaign that swept aside years of caution on the use of opioids, previously reserved for the gravely ill because of their highly addictive nature.

But as a result of the singularly aggressive promotion of the prescription drug, both Purdue and the Sackler family, which owns the firm, now faces more than 2,300 lawsuits in the United States.

They stand accused of having provoked the nationwide opioid crisis.

Opioids are blamed for more than 400,000 deaths by overdose since 1999, according to recently published data, and on average for more than 130 deaths a day. The origins of OxyContin, which has generated more than $35 billion in sales for Purdue, date to 1990.

The laboratory, based in the northeastern US state of Connecticut, was looking for a successor to its popular analgesic MS Contin, a morphine-based medication prescribed mainly to cancer patients but which was facing growing competition from generic drugs.

Purdue developed a painkiller based on oxycodone, a semi-synthetic opioid first concocted in Germany in 1916, with effects comparable to those of MS Contin.

Opioids posed well-known risks of dependence, but the laboratory had an answer: the new drug’s beneficial effects would last 12 hours, twice as long as similar medications, meaning a patient would take fewer pills and face the reduced danger of addiction.

But even before it reached the market, tests showed that OxyContin’s effects did not last as long as originally thought, the Los Angeles Times found in a 2016 investigation.

Still, in December 1995, the US Food and Drug Administration (FDA) gave Purdue a green light to market OxyContin for the treatment of moderate to severe pain, authorizing its use for a range of ailments, much less serious than cancer.

“At the time of approval, the FDA believed the controlled-release formulation of OxyContin would result in less abuse potential since the drug would
be absorbed slowly and there would not be an immediate ‘rush’ or high,” an agency spokesman told AFP.

The FDA’s approval drew growing criticism after Curtis Wright, a doctor who led the agency committee that authorized OxyContin, left to take a senior position with Purdue in 1998.

Another troubling development: once the drug was being marketed and aggressively promoted, OxyContin generated a huge black market that Purdue, critics say, ignored or minimized for far too long.

Quantities of pills were procured — stolen from pharmacies or obtained from unscrupulous doctors — and ground into a powder to be inhaled, which multiplied their euphoric effects, according to a confidential US Justice Department report cited by The New York Times in 2018.

The 80-milligram pills, the most common dose, sell for $65 to $80 on the black market, compared to $6 in pharmacies, according to several doctors questioned by AFP.

An Explosion in Sales 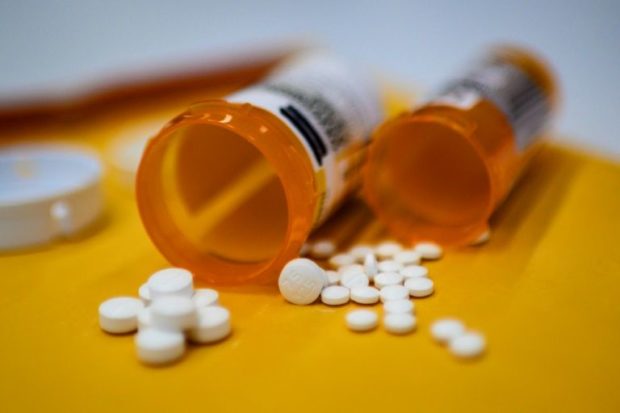 Despite the warning signals, Purdue continued to present OxyContin as being less addictive than other opioids.

Purdue also built up a so-called “speakers’ bureau” — mainly physicians highly remunerated for attesting to the “miracle” qualities of OxyContin.

Purdue helped finance both organizations, and several of their members worked as consultants for the laboratory.

Underscoring the close relationship, David Haddox, who headed an APS committee that endorsed the increased use of opiates, was hired by Purdue in 1999, where he remained until earlier this year.

Purdue’s sales pitch to physicians was probably helped by the fact that pain treatment has long been a neglected branch of medicine, said Gregory Terman, director of the Acute Pain Service at the University of Washington and the APS president from 2015 to 2017.

“Until the opioid crisis, NIH (the National Institutes of Health) had never spent more than one percent of their budget on pain — the most common reason people go to doctors — let alone chronic pain, which troubles more than 100 million Americans,” he said.

The APS, facing lawsuits over its promotion of opioids and unable to pay its lawyers, filed for bankruptcy in late June.

Primary care doctors “have little training in addiction or pain, and many of them believed the promises” made by Purdue, Stanford University psychiatry professor Keith Humphreys said.

In 2006, the medical world finally awoke to the dangers of OxyContin, jolted by an article by Leonard Paulozzi of the Centers for Disease Control and Prevention (CDC), who reported that deaths linked to opioids had exploded by 91 percent from 1999 to 2002.

In 2007, for the first time, Purdue Pharma and three of its executives pleaded guilty, in Virginia, to having deceived physicians, patients, and regulatory authorities about the risks posed by OxyContin of dependence or abuse.
They agreed to pay $635 million in fines.

Yet when Purdue’s legal problems grew in the United States and OxyContin sales fell in 2010, the company simply turned to its international subsidiary Mundipharma to promote sales in other parts of the world.

In Europe, where drug ads targeting the general public are banned, Mundipharma aired one in Spain in 2013 drawing attention to the problem of chronic pain and encouraging people to see a doctor and demand treatment.

Asked about that, a Mundipharma spokesperson said only: “We no longer have any such activity today.”

The group has also financed seminars for physicians in other countries — notably Brazil and China — to promote opioids as effective pain treatment, the Los Angeles Times reported in 2016.

Joseph Pergolizzi, a Florida doctor who the newspaper said had lectured in 2016 at a Mundipharma-sponsored conference in Brazil, rejected any suggestion of deceptive marketing.

“I was invited to a cancer pain conference,” he told AFP, adding that he had spoken about “severe cancer pain treatment and what the options are.”

Pergolizzi said he had severed all ties to Mundipharma two years ago.

Purdue has repeatedly stated that OxyContin is only one of several opioid medications on the market and that it now fights actively against the abuse of such drugs.

It sought bankruptcy protection in mid-September and is now urging the states and cities suing it to agree to its transformation into a trust, with any future profits to be used to alleviate the harm caused by the opioid crisis.

The laboratory has said it is ready to make payments to the plaintiffs totaling $10 billion to $12 billion — with $3 billion coming from the Sackler family — if they drop all legal action.

But nearly 25 states, including New York, have rejected the proposal.

The offer from Purdue and the Sacklers falls far short of paying for “the death and destruction they inflicted on the American people,” said New York Attorney General Letitia James.