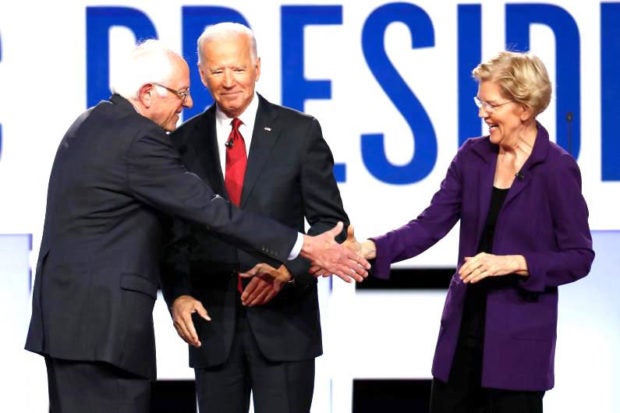 If you tuned in for the first five nights of the Democratic presidential debates, you might think “Medicare for All” and providing universal care are the only health care ideas Democrats have.

With four months to go before the Feb. 3 Iowa caucuses, proposals on issues like the opioid epidemic have attracted less attention.

That is because big-ticket policy ideas ― like enrolling all U.S. residents into a Medicare-style program and eliminating private insurance ― can help candidates stand out in the eyes of voters during a primary, said Robert Blendon, a professor of health policy and political analysis at Harvard University and director of the Harvard Opinion Research Program.

But Blendon said he has not seen polling suggesting voters have an appetite for another major health care debate. Voters are more concerned with how much they have to pay for medical care, like prescription drugs ― “very practical, pocketbook issues,” he said.

“So it’s just my belief that whoever wins is going to have to switch back to pocketbook issues,” Blendon said of the eventual Democratic nominee.

A new poll echoes that. Democratic voters are eager to hear more from the candidates about other health care issues, according to a Kaiser Family Foundation poll released Tuesday. The results show 58% of Democrats and Democratic-leaning independents believe the candidates are not spending enough time talking about women’s health, including access to reproductive health services, for instance. And more than half said the candidates were spending too little time discussing surprise medical bills and ways to lower the costs people pay for care. (KHN is an editorially independent program of the foundation.)

The next Democratic presidential debate on Oct. 15 will give 12 of the candidates a fresh chance to talk about their ideas beyond sprawling health care reform. Let us walk you through a few proposals they have championed, plus what President Donald Trump is offering.

And the issue is ubiquitous since polls show voters are deeply concerned about their out-of-pocket costs. Raymond Kluender, an assistant professor at Harvard Business School who researches medical debt, said about 20% of households have medical bills in collections.

Kluender said Sanders’ plan targets debt that is rarely repaid anyway, noting that only about 8% of what is sent to collection agencies is ever repaid. Although some limited research suggests debt forgiveness may have mental health benefits, Kluender said, the effect Sanders’ move would have “is hard to know.”

Here are highlights of Sanders’ proposal:

Former Vice President Joe Biden announced a plan this month to reduce gun violence, an issue that has become a must for most Democratic voters.

He also drew attention to his newer ideas to change the system, including a push toward transitioning to “smart guns.”

But Biden’s plan does not go as far as that of some of his opponents ― including Sen. Cory Booker (N.J.), who would require a license to own a firearm.

Here is what Biden has said he would do on gun control:

Few disagree on the need to increase access to mental health care in the United States, making the issue one that is unlikely to move voters on its own, Blendon said. But Buttigieg’s plan stands out for tripling the investments proposed by other Democratic candidates, including Massachusetts Sen. Elizabeth Warren.

True to his mayoral roots, Buttigieg adopts a locally driven approach. Among other strategies in his 19-page plan, he would give communities “most affected” by mental illness and addiction $10 billion annually for 10 years to address prevention and care.

His campaign claims the plan would enable about 10 million more people to access care over the first four years of the program. Here are some ways Buttigieg said he would do that:

Warren unveiled an aggressive plan to combat the nationwide opioid epidemic last spring, proposing to spread $100 billion across the country to help state, local and tribal governments respond to the crisis.

And unlike Buttigieg and his $300 billion mental health and addiction plan, Warren outlined how she would pay for it ― with a tax on the richest 75,000 families.

“This crisis has been driven by greed, pure and simple,” she wrote in a Medium post detailing her plan.

Here is some of what her plan would do:

President Donald Trump caused a stir this year when he declared the Republican Party would become “the party of health care” and suggested he was working on another proposal to replace the Affordable Care Act.

But he has said little on the subject since then, and a Washington Post report last month said the White House has abandoned that effort in favor of damage control should the 5th Circuit Court of Appeals strike down the Affordable Care Act.

Instead, the Trump administration has picked up on a series of often disparate health issues, including changes to how the government pays for care, investments in public health crises and steps intended to pressure drugmakers to lower prices.

One of his latest moves came on Oct. 3, when Trump signed an executive ordermaking a variety of changes to Medicare, including expanding the private Medicare Advantage plans available to seniors and changing the enrollment process. He took the opportunity to pan the progressive push toward a single-payer health care system as “socialist,” framing his changes as protections for seniors.

In addition to an ambitious plan to end HIV/AIDS introduced in February, the Trump administration unveiled a kidney care initiative in July that adjusts payment incentives to encourage preventive care, home dialysis and transplants. And last month, the administration said it was preparing to ban the sale of flavored e-cigarettes amid a public health scare over vaping and concerns about widespread use among teens.

And after promising to lower drug prices, Trump has struggled to make changes amid disagreements with the pharmaceutical industry and even fellow Republicans.

The administration has tasked the Department of Health and Human Services to work on other policies, including requiring hospitals to disclose prices and laying out a framework to allow, for the first time, the legal importation of prescription drugs from overseas.