A century in the life of veteran Justino de Lara, 101 Justino de Lara as a young carpenter in Manila. CONTRIBUTED

When he turned a century old last year in April, Justino de Lara blew out the candles on a coffee cake with his good friend Celestino Almeda, who was 101 years old.

How many centenarians would have the opportunity to celebrate that kind of milestone together?

Theirs is a friendship that goes back more than seven years when they met in Washington, D.C., shared an ardent advocacy, and began to walk the precarious path campaigning for recognition of Filipino World War II veterans.

At 101 years old, “Mang Tino” is one of the oldest veterans who have experienced life in all its highs and lows, the searing pain and ecstatic glory.

He was one of thousands of Filipino veterans who received the Congressional Gold Medal for his service in World War II and has received compensation from the U.S. government.

When the Trump Administration proposed to end the parole program for Filipino veterans, Justino joined the chorus of outrage and frustration that the U.S. government was once again failing to keep its promise, as in the 1940s when President Truman did not honor President Roosevelt’s promise to recognize all Filipinos soldiers who served during the war. 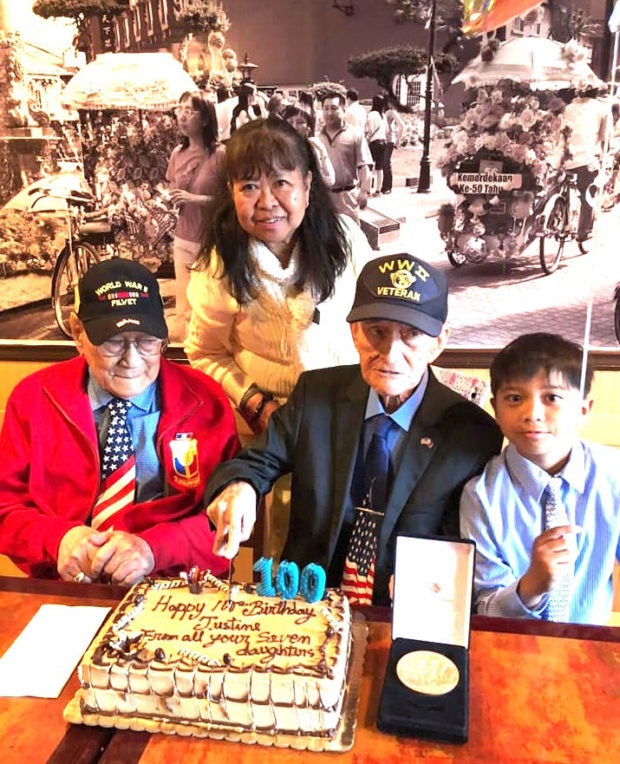 The Filipino World War II Veterans Parole Program was approved under President Barack Obama authorizing qualified family members to be quickly granted visas so they can perform the role of caregivers to the aging, fading veterans.

Justino came of age during the war.  He was among the thousands of idealistic Filipinos inducted into the United States Army Forces in the Far East (USAFFE) and fought the invading forces of the Imperial Japanese army. He survived the Death March.

“It’s hard to become a prisoner of war.  We ate only rice and boiled vegetables, and sometimes the Japanese soldiers gave us a hard time and beat us,” he said, speaking to The FilAm through his eldest daughter Lydia.

Justino and his late wife, Adelaida Benedictos, have seven daughters who gave them four grandchildren. The extended de Lara family includes two great-grandchildren who are both boys. “My wife passed away already before she got her visa to come here in America,” he said.

Finishing only Grade 6, he worked as a carpenter in Manila where he was born. He and his wife sought to raise their daughters on his meager income.

In his later years, he was awarded U.S. citizenship for his role as an Army volunteer.

As far as he could remember, citizenship was granted because he fought under the banner of the USAFFE.

He arrived in the U.S. at the age of 76, already a widower. His wife died of cardiac arrest years earlier. He petitioned for his daughters one by one until five of them decided to make a life in the U.S. One daughter now lives in Qatar, and another in Italy. 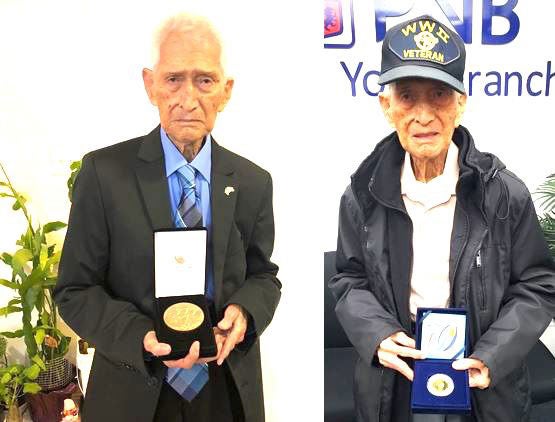 Justino clutching his Congressional Gold Medal from the U.S. government (left) and a PNB commemorative coin for being a loyal customer. CONTRIBUTED

“I never worked in the U.S. I was already old when I came here,” he said.

He shuttles between Washington, D.C. where three of his daughters live, and Wheaton, Maryland, the home of another daughter.

Although he lives in D.C. he banks at Philippine National Bank in New York, where General Manager Eric Bustamante goes out of his way to welcome him every time he comes for a transaction.

“There used to be a PNB in Maryland, but it closed so I went to PNB New York,” he explained.

His trips to NYC give him a chance to pass by the Statue of Liberty, a landmark that reminds him of how he once dreamed of coming to America.

The secret to his long life? An easy-going attitude and watching old movies.

“He’s a happy person even when he was in the Philippines,” said daughter Lydia. @TheFilam