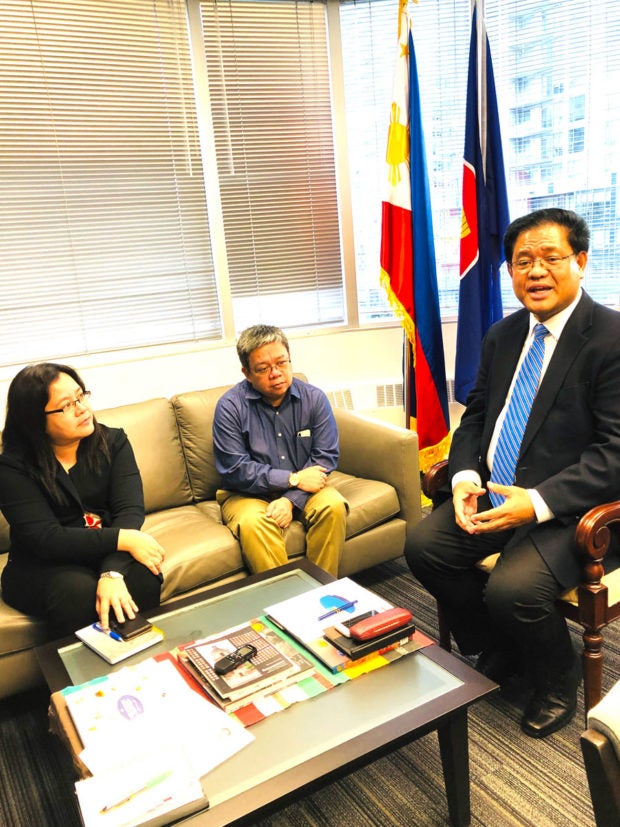 TORONTO, Ontario — Orontes V. Castro, the Philippines’ new consul general in Toronto, is actually a rarity in the ranks of the Philippine foreign service corps. He is one of only a few certified public accountants among them.

“I worked as an auditor for SGV (Sycip Gorres & Velayo–an affiliate of Ernst & Young), and then, at 24 years old, as division chief at the accounting department of the Philippine International Trading Corporation, the state trading firm of the Philippine government,” Castro said.

He obtained a Bachelor of Arts degree in 1983, a major in the accounting honors program, at the University of the East.  He was also an accounting lecturer at the Philippine School of Business Administration (PSBA).

Then he got bitten by the government service bug.  “My two older brothers worked in government, and I was inspired to follow suit, so I took and passed the exams for commercial attache and trade representative and joined the Department of Trade and Industry.  I did this at the same time that I sat for, and passed, the foreign service officer (FSO) exams.  That was 25 years ago,” he added.

Castro also served as assistant secretary of the Office of Fiscal Management Services and as assistant secretary and chief of protocol at the Office of Protocol, Department of Foreign Affairs in Manila. His love of number crunching benefitted his fellows at the Department of Foreign Affairs: He discovered that the salary and pay scale of DFA personnel were below those of other government departments.  He worked to remedy the discrepancy, resulting in the upgrade of pay scales and salaries within the DFA, to match their counterparts in other government offices.

The number crunching Castro is also a history buff.  Queried on his unique first name, he explained that his parents named him “Orontes” after one of the twin rivers in Lebanon — the south-flowing Leontes and the north-flowing Orontes, which flows through Syria and Turkey before draining into the Mediterranean Sea.

Castro’s parents may have been prophetic in the naming of Orontes, whose first foreign assignment was as third secretary and vice consul at the Philippine Embassy in Beirut, Lebanon, from 1996 to 2000.  From 2000 to 2003, Castro served as vice consul, then consul, at the Philippine Consulate General in New York.  From 2007 to 2013, he served as consul, then deputy consul general in Chicago.

His Lebanese tour of duty provided him a chance to be a “bridge” or “reunifier” of clans.  Then-Archbishop Diosdado Talamayan (now retired) requested Castro to help the Abraham family of Cagayan track down their relatives in Lebanon.  Castro, working through his Lebanese translator, was able to reunite the Abrahams. This earned him a certificate of appreciation for Outstanding Services to Filipinos in Lebanon from the Archdiocese of the province of Cagayan, Philippines.

“Such a joyful reunion! The Abrahams are related to Kahlil Gibran, the Lebanese national poet and writer of ‘The Prophet,’ you know,” Castro explained.

Family is important to Castro, himself one of seven offspring of the late Roque Castro (a World War II veteran who was one of those collectively awarded the U.S. Congressional Gold Medal in 2016 for valor and heroism) and Lily Leticia Valdez from San Miguel, Tarlac.

His brothers have passed on, but his ties to his sisters are strong. Rita, the youngest who lives in Seattle, looks after their mom.  Two other sisters, Jacqueline and Enriqueta, are in the Philippines.  “I am proud to say that I help in supporting my younger relatives. I love my family,” Castro gushed, beaming when reminded that his sentiments are echoed by 99.9 percent of Filipinos living abroad who share in providing for their kin.

Castro wants to continue and enhance the projects begun by his predecessor, the late Rosalita Prospero, who was his close friend. “Of approximately 10 million Filipinos overseas, 900,000 are in Canada, and around 400,000 are in the Greater Toronto Area.  We want to encourage the growth of Filipino cultural and heritage projects, especially through Sentro Rizal, so that our young people can learn about their roots and feel pride,” he stated.

Castro mentioned that he approached the Philippine National Historical Commission for donations of copies of Jose Rizal’s books to selected libraries in Canada, “to promote multiculturalism.  The Philippine Artists Group also proposed an exhibit of the works of Filipino artists in Canada, in the consulate general offices.  These cultural projects would allow Filipino Canadians to reconnect with their culture.”  Castro wants the consulate general offices to be the link to Filipino Canadian cultural affairs in the community.

“We have the official website, which could provide the online community access to cultural resources.  We are counting on the assistance of Filipino Canadian organizations and associations to help us celebrate landmark events.  We have requested the Development Council of the Philippines to lend us restored archival films, for example, that showcase the golden age of Philippine cinema.  Filipino Canadian organizations can provide the venues for the showing of these films to members of the community,” Castro added.

With the enhanced focus on Philippine cultural offerings, could a film festival highlighting the Golden Age of Philippine cinema be far behind?  With Orontes V. Castro, number crunching history buff, culture patron, and newly appointed consul general in Toronto, this is certainly a possibility.

“Not only culture,” he adds, “but also assistance and protection for our kababayans.  We want the community to regard the consulate general offices as their link to the Motherland.  We are here to serve.”

Consul General Castro is fluent in Pilipino, English, French, and Pampango.  He has basic knowledge of Spanish and German, and may be emailed at [email protected]