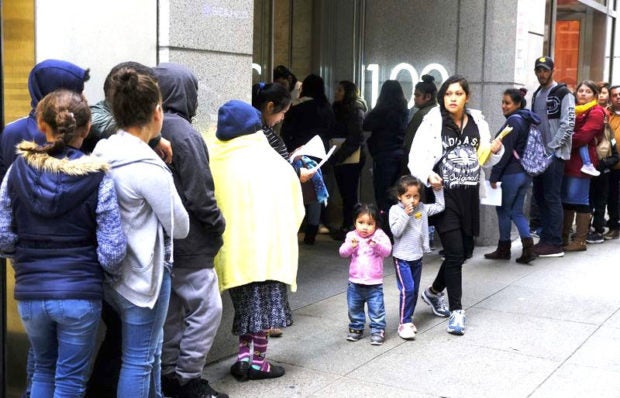 In this file photo, hundreds of people overflow onto the sidewalk in a line snaking around the block outside a U.S. immigration office with numerous courtrooms in San Francisco. Federal judges are being asked to block a new Trump administration policy scheduled to take effect next week that would deny legal permanent residency to many immigrants over the use of public benefits. Almost a dozen lawsuits have been filed from New York to California to prevent the “public charge” rule from taking effect on Oct. 15. Judges have indicated a willingness to issue rulings before the scheduled start date. AP PHOTO

NEW YORK — Federal judges in three states on October 11 temporarily blocked Donald Trump’s policy to deny green cards to many immigrants who use Medicaid, food stamps and other government benefits, dealing a setback to one of the president’s most aggressive moves yet to cut legal immigration and make it more based on employment skills than family ties.

The rulings in California, New York and Washington came in quick succession four days before the new rules were set to take effect. The judges ruled in favor of 21 states and the District of Columbia, which challenged the policy almost immediately after it was announced in August.

U.S. District Judge George Daniels in New York said the policy redefined longstanding immigration laws with a new framework that had “no logic.” Allowing the policy to go into effect now, he said, would have a significant impact on “law-abiding residents who have come to this country to seek a better life.”

“Overnight, the rule will expose individuals to economic insecurity, health instability, denial of their path to citizenship and potential deportation,” Daniels wrote. “It is a rule that will punish individuals for their receipt of benefits provided by our government, and discourages them from lawfully receiving available assistance intended to aid them in becoming contributing members of society.”

Ken Cuccinelli, acting director of U.S. Citizenship and Immigration Services, expressed confidence that the administration would eventually prevail and framed the policy as a legal attempt to ensure that those who settle in the United States can support themselves financially.

“An objective judiciary will see that this rule lies squarely within long-held existing law,” Cuccinelli wrote on Twitter. “Long-standing federal law requires aliens to rely on their own capabilities and the resources of their families, sponsors, and private organizations in their communities to succeed.”

White House press secretary Stephanie Grisham added that the rulings were “extremely disappointing” and “the latest inexplicable example of the administration being ordered to comply with the flawed or lawless guidance of a previous administration instead of the actual laws passed by Congress.”

While Trump has focused much of his attention on illegal immigration — including his pledge to build a wall on the Mexican border — he has also trained his sights on curbing legal immigration by moving away from a system that is largely based on family ties. He outlined his plans early in his administration in discussions with Congress to overhaul the nation’s immigration laws, turning to executive actions after those efforts failed.

Just last week, Trump issued a presidential proclamation that says immigrants will be barred from the country unless they are covered by health insurance within 30 days of entering or have enough financial resources to pay for any medical costs. The measure, which is scheduled to take effect Nov. 3, could prohibit the entry of about 375,000 people a year, mainly family members who account for a majority of people getting green cards from abroad, according to the Migration Policy Institute, a nonpartisan think tank.

Friday’s rulings put the policy to deny green cards to more immigrants on government aid on hold while lawsuits proceed. Federal law already requires immigrants seeking to become permanent U.S. residents to prove they will not be a burden on the country — a “public charge,” in legal terms —but the new rules detail a broader range of programs that could disqualify applicants.

On average, 544,000 people apply for green cards every year, with about 382,000 falling into categories that would be subject to the new review, according to the government. Guidelines in use since 1999 refer to a “public charge” as someone primarily dependent on cash assistance, income maintenance or government support.

Under the new rules, the Department of Homeland Security has redefined a public charge as someone who is “more likely than not” to receive public benefits for more than 12 months within a 36-month period. If someone uses two benefits, that is counted as two months. And the definition has been broadened to include Medicaid, housing assistance and food assistance under the Supplemental Nutrition Assistance Program, or SNAP.

Factors like the immigrant’s age, employment status and English-language ability would also be looked at to determine whether they could potentially become public burdens at any point in the future.

While the administration argues that the rule changes would ensure that those gaining legal residency status are self-sufficient, critics say they are discriminatory and would have the effect of barring immigrants with lower incomes in favor of those with wealth. They consider it a betrayal of Emma Lazarus’ words on the Statue of Liberty, “Give me your tired, your poor, Your huddled masses yearning to breathe free.”

New York Gov. Andrew Cuomo called the ruling “an important win for our country (that) sends a clear message that we will not allow these hateful policies imposed by the Trump administration to tear our country apart. Xavier Becerra, California’s attorney general, said it stops a “heartless attempt to weaponize” health care, housing and other essential public services.

Daniels’ ruling in New York was in a lawsuit filed by the states of New York, Connecticut and Vermont. The Washington decision, authored by U.S. District Judge Rosanna Molouf Peterson in Spokane, was in a lawsuit by the state of Washington and 13 others: Colorado, Delaware, Hawaii, Illinois, Maryland, Massachusetts, Michigan, Minnesota, Nevada, New Jersey, New Mexico, Rhode Island and Virginia.

U.S. District Judge Phyllis Hamilton in Oakland, California, ruled in favor of California, Maine, Oregon, Pennsylvania and the District of Columbia. Her decision applies only in those states, a moot point because the other two injunctions are nationwide.