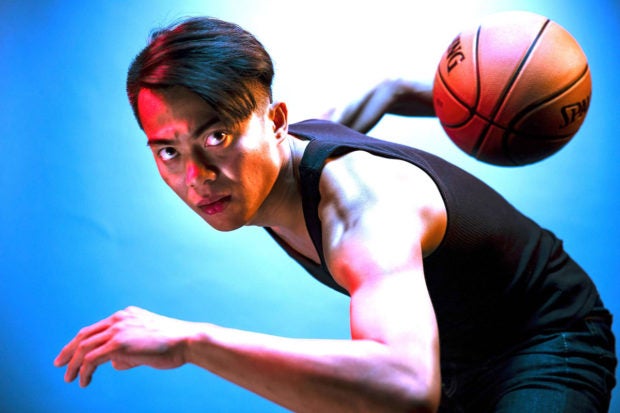 Obrero portrays a pertinacious Chinese American basketball player who is determined to land a spot on the American Team traveling to Beijing. It runs until October 20.

The game of basketball is what brings American and Chinese players together in a “Friendship Game” in Beijing at the time of the 1989 Tiananmen Square protests. It shows the beliefs and attitudes of the coaches based on their cultural upbringing and the consequences of their decisions.

Wen Chang (James Seol), the coach of the Beijing team, is reserved and dedicated to the Communist Party. Opposite him is the American coach Saul (Keith Kupferer), who is aggressive and foul mouthed.

The production begins with Coach Saul in 1971 China where he encourages Wen Chang to make his players more aggressive.

“The players need to each wait for their turn,” explains Chang. “It’s always your turn!” corrects Saul.

Fast forward 18 years, Saul is preparing for the “Friendship game.”

A 17-year-old Chinese American high school student Manford Lum (Glenn Obrero), from San Francisco’s Chinatown, wants to be on the American team. He promises Coach Saul, “I will win you games, I will score you points. I will shoot from half court, full court, I am the most feared player in Chinatown. When you say jump, I say 10 feet. Beijing. One Game. Four Days.”

Initially, Coach Saul waves him off. Then Lum shows him that he can throw 100 perfect free throw shots in a row.

“My cousin tells me the Beijing team is made up of 7-footers,” says Lum, which Saul dismisses. After all, he’s seen how the Chinese Team played in 1971.

The production is partly based on playwright Lauren Yee’s father, Larry Yee. It is directed by Filipino American Jesca Prudencio.

Obrero said he was not even born yet during the Tiananmen Square Massacre. What his character Lum and Obrero share is the willingness to take a chance at a rare opportunity when it presents itself.

“If an opportunity comes where there is a part for me, I have to compete against all of the Asian Americans in the community, from Chinese, Japanese, Korean, Vietnamese, Indian, etc.,” explained Obrero in an exclusive email interview with PINOY Newsmagazine.

He said a career actor faces daily rejection, and it takes perseverance to get through all of that. “I’m fortunate enough to be represented by an agent and be able to go to plenty of auditions. But from 100 auditions, I might book one project.”

“But the moment you book a part, all of those rejections vanish.”

“As an Asian American actor it is even more difficult for me to book a job because there are fewer roles written for us [Asians],” he explained in the email interview.

Born in the Philippines, he grew up in Tampa, Florida, in the ‘90s. His father is a native of Oas, Albay in Bicol and his mother was born in Tanauan, Batangas and grew up in Makati.

In his Tampa community, Obrero said, there were many first-generation Filipinos. “There were multiple families that were all adapting to this new American culture together while keeping our own Filipino values.”

He accidently got into acting in school when he was forced to do extra credit to pass English. “My teacher said she would give me extra credit if I participated in the school play.”

He acted in college plays such as “The Last Days of Judas Iscariot,” “Three Muskateers, and “Romeo and Juliet.”

Obrero worked with Filipino American director Jesca Prudencio for his role.” I was so thrilled to work with a fellow Fil-Am. I would say that it is pretty rare, I really don’t know many Fil-Am directors, so working with Jesca was refreshing. She’s super talented and her style of direction is so unique.”

Prudencio’s vision for the production was to “create an experience that is not only theatrical, but athletic in every aspect.”

Glenn said his favorite Filipino celebrity is Manny Pacquiao. “He’s very humble, generous, and exciting to watch! His fights were always a festive event and brought many Filipinos together in a living room to yell at a TV.”

Audience member Elin Lee, a Northwestern University student, shared her interpretation of the production. “I think this is about Lum being part of a diaspora and wanting to be a part of it, but feeling disconnected from it.”