US Supreme Court Takes on Gay and Transgender Rights

US Supreme Court Takes on Gay and Transgender Rights

“We are talking about millions and millions of people who go to work every day fearful of being fired because of who they are,” said Gerald Bostock, whose case is being heard by the nation’s top court.

life, liberty, and the pursuit of happiness. how is it not ridiculously obvious and indisputable that every human being deserves these rights? standing with my LGBTQ 🏳️‍🌈 brothers and sisters today and forever pic.twitter.com/gaBxQlRZP0

Bostock, who worked as a child welfare supervisor in the southern state of Georgia, says he was fired in 2013 because of his sexual orientation after he joined a gay sports team.

Bostock’s case is being heard by the nine-member Supreme Court along with that of a skydiving instructor, Donald Zarda, who claimed he was sacked because he was gay.

Zarda won his case in another court and the Supreme Court agreed to hear the cases together along with that of Aimee Stephens, who lost her job at a Michigan funeral home after telling management she was transgender and would be coming to work in women’s clothing. 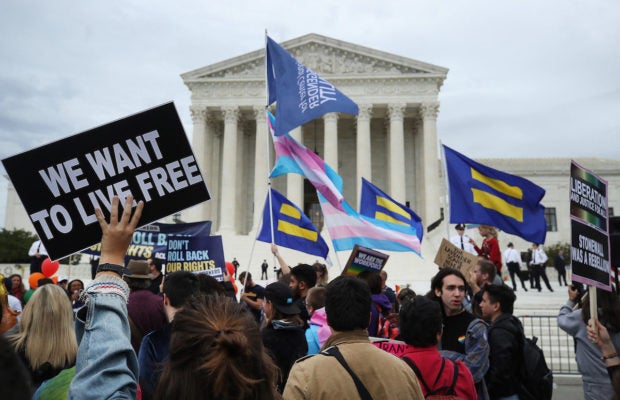 Speaking outside the court on Tuesday, Thomas Rost, the owner of the funeral home, said firing Stephens was a “difficult choice” but was “in the best interest of the families my business serves.”

Zarda died in a base-jumping accident in 2014, but his family have pursued the case.

Conservatives outnumber liberals five to four on the top US court following the nomination of two conservative justices by President Donald Trump and the fault lines on the case were clearly apparent during Tuesday’s arguments.

Arguing for the Trump administration, Solicitor General Noel Francisco backed the employers and said the 1964 Civil Rights act applies to discrimination on the basis of sex and not sexual orientation.

“Sex means whether you’re male or female, not whether you’re gay or straight,” Francisco said, adding that it was up to Congress, not the courts, to address the question.

Advocates for the LGBTQ rights community argue that their rights have advanced foremost through the courts in recent years, most notably with the Supreme Court’s landmark 2015 decision to legalize same-sex marriage.

Justice Samuel Alito, one of the five conservative justices, adopted essentially the same tack as the solicitor general.

“If the court takes this up and interprets this 1964 statute to prohibit discrimination based on sexual orientation, we will be acting exactly like a legislature,” he said. 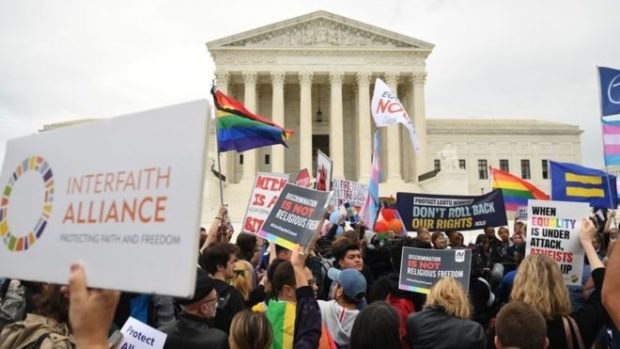 The four liberal justices appeared sympathetic to the dismissed workers during Tuesday’s arguments.

Arguing for Stephens, the funeral home employee, lawyer David Cole said she “is not seeking specific protection, but for the same protections that everybody has.”

Twenty-two of the 50 US states currently forbids discrimination against sexual minorities in the workplace.

The Supreme Court is likely to issue a ruling in the closely-watched case in early 2020 in the midst of a heated presidential campaign, in a test of the judges nominated by Trump.

About 100 LGBTQ activists chanted outside the Supreme Court building before arguments were to begin on the first day of the court’s new session.

One woman wore a clerical collar and held a sign reading: “My faith does not discriminate.”

Laverne Cox, the transgender actress who starred in the Netflix show “Orange is the New Black,” spoke to reporters outside the court following the oral arguments.

“I hope no matter what our justices decide that Americans know that it should not be okay to discriminate against someone simply for being who they are,” Cox said.

“If we do not win this case, then the people, then our legislators, need to make it clear that discrimination against anyone because of who they are should not be the way that we live our lives here in the United States of America,” she said.