Artist John Jay Cabuay with copies of the book he illustrated. CONTRIBUTED

NEW YORK — When artist and art professor John Jay Cabuay was at his busiest in the final year of his master’s program at New York’s prestigious Fashion Institute of Technology (FIT), he received an offer from his agent: “Bob Marley’s daughter, Cedella, is doing a children’s book and is really interested in your illustrations.”

Despite his busy school schedule (he was teaching as well) and fatherhood, Cabuay accepted. “I couldn’t pass up the opportunity and took it up head on. I mean, c’mon? It was a Bob Marley project!”

based on Bob Marley’s song of the same name, was just published by Chronicle Books and is getting great reviews. “Cabuay supports the lyrics with the kinetic flair of a music video in boldly colored, textural pencil and digital illustrations that convey the vitality and imperative force behind Bob Marley’s message,” notes Publishers Weekly. 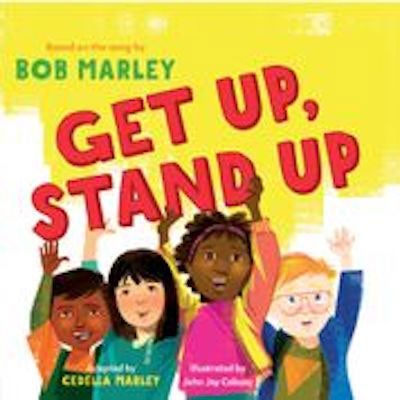 “The illustrations are bright and bold, and the characters display tons of energy and attitude. The bullying scenes are depicted in an easy to understand way, while the reaction for the others includes standing up together. The diversity of characters makes it clear that this wonderful message is for everyone. There’s a sense of unity in every scene,” reads a review on Amazon.

Cabuay emigrated from Manila when he was only 12 years old. His family settled in New Jersey, but he wanted desperately to be in New York City. So, he moved in with some of his relatives in Queens, New York where he attended high school and eventually art school at F.I.T, where he earned his bachelor’s degree, and more recently, his master’s in Fine Arts in Illustration.

Cabuay’s instructors were so impressed that they hired him to teach. “He’s a really good instructor and he loves to give us extra insights about working as a professional freelancer,” says one of his students, Ramon Gil.

Aside from teaching, Cabuay has also done illustrations for clients around the world like Deloitte, GQ Japan, The Saturday Evening Post, The Observer, The Washington Post, Backstage, Politico and many more. He has illustrated numerous book jackets for major publications and magazine covers as well.

Now that the Marley book has been published, John Jay is able to take a breather–teaching, freelancing and helping out with the school’s Diversity Comic Con. “After two years dedicated of my life to the book, it’s a relief to finally have the book out there. My daughter, my wife and I also appear in the book in little cameos,” he chuckles. “Yeah, that’s cool.”