Thank you to all our guests, donors, supporting Tour players, to Liberty National, to NEXUS, and my @TGRLiveEvents team for making the inaugural #NEXUSCup such a success. All to raise money for @TGRFound supporting students and giving them access to higher education. pic.twitter.com/0xJY9jGPwA

The 43-year-old American, who won his first major title since the 2008 US Open last April at Augusta National, underwent an arthroscopic procedure on his left knee last month.

Woods, speaking on ABC’s Good Morning America earlier this week, said he had “got the clearance last week to start full practice” and had already played nine holes. 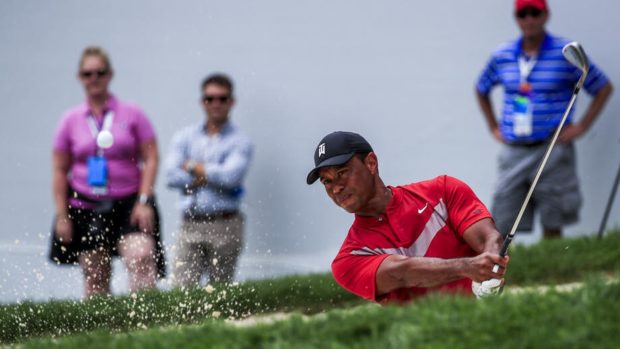 Tiger Woods said the knee was “sore” after the practice round but he is excited for the chance to return to playing shape.

The next event for Woods will be “The Challenge: Japan Skins” alongside Rory McIlroy, Hideki Matsuyama and Jason Day on October 21 before he plays at the US PGA’s inaugural Zozo Championship October 24-17 at Chiba, Japan.

Woods will serve as captain of the US team at December’s Presidents Cup in Australia and has not ruled out selecting himself as a player with one of four captain’s picks he will make in early November. Tiger Woods battled back injuries in recent years, missing a substantial span from 2014 to 2017 when he underwent spinal fusion surgery to try and resume normal activities much less his golf career.

The comeback was boosted by a victory at the 2018 Tour Championship and reached its best moment so far with his fifth Masters crown last April, his 81st career US PGA title moving Woods within one of matching Sam Snead’s all-time record.

Woods missed the cut at the British Open and PGA Championship and shared 21st at the US Open at Pebble Beach.