The new-look Los Angeles Lakers have a lot to figure out before the NBA season begins, but there’s no question in superstar LeBron James’s mind of the role new teammate Anthony Davis should play.

“We all know great Anthony Davis is,” four-time NBA Most Valuable Player James said as the Lakers welcomed reporters to media day on Friday before kicking off training camp for the upcoming season.

“If we’re not playing through Anthony Davis while he’s on the floor, then there’s no sense in having him on the floor because he’s that great.

“He has been very efficient in his career, he commands double teams, and when you’re able to attract two defenders on one team, you have the numbers game.”

Davis arrived this summer in a trade from the New Orleans Pelicans as the Lakers revamped a team that failed to make the playoffs last season.

James said he was “ecstatic” when he heard Davis was heading to Los Angeles and the new teammates have already spent considerable time working together.

“It’s exciting to have such a beautiful young mind, a beautiful player but also a great leader as well,” James said of the six-time NBA All-Star, who averaged more than 23 points per game through seven seasons with New Orleans. The Pelicans made him the first overall pick in the 2012 NBA draft. 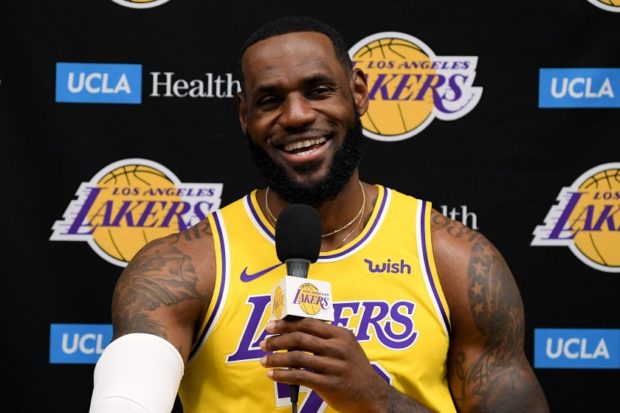 With a wealth of new players, James predicted it will take some time for the Lakers to develop chemistry and camaraderie.

“It’s going to be a process,” James said. “We ultimately know what our goal wants to become but we can’t shortcut the process.”

With his sights set on a deep playoff run for the Lakers, the 34-year-old James declined to add his name to the growing list of superstars who have pledged their services to the United States for next year’s Olympics in Tokyo.

“I don’t know,” James said when asked if he’d join stars including Golden State’s Stephen Curry and Houston’s James Harden and Russell Westbrook in committing to the Games after the United States’ disappointing seventh-place finish in the recently concluded World Cup.

“I would love to,” he said. “I want to stay healthy as well. That’s most important. I was not happy how we did this summer.”