Director Martin Scorsese unveiled his new film “The Irishman” Friday, kicking off the New York film festival with the ambitious Netflix movie that was more than a decade in the making.

The star-studded gangster epic had a budget of $160 million, using 117 different filming locations to shoot 309 scenes which together add up to a run time of 3 hours 29 minutes. 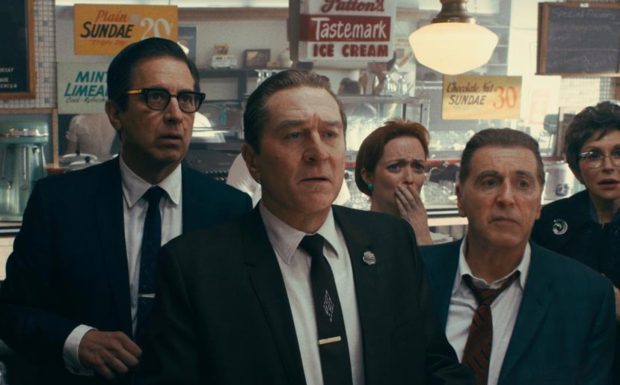 “Things got in the way,” Scorsese told journalists Friday after the world premiere screening. “We couldn’t get backing — there was no way — for years,” he added.

“I’m just happy we all got finally to do it because it did take a long time,” said De Niro. “We were lucky to get people to put up the money.”

After several studios declined the project, it took Netflix’s deep pockets to get the green light for “The Irishman” — the nickname of Frank Sheeran, whose account of real-life events forms the basis of the book and film.

De Niro, 76, is able to play Sheeran across several decades, from a 34-year-old in 1955 to his 2003 death aged 83. Scorsese said it was necessary to “come up with a solution for a de-aging that wouldn’t interfere with Bob and Joe and Al.”

“Talking to each other with helmets on or tennis balls in their faces — they were not going to do it,” he said.

ILM eventually succeeded in developing technology which did not require fitting the actors with any devices.

All the heavy hitters are out tonight for the world premiere of Martin Scorsese's THE IRISHMAN at #NYFF pic.twitter.com/LMK7LK36sn

After an unsettling first few minutes, the special effects work well, with Pacino also shedding multiple decades in some scenes.

De Niro’s first reaction to when he saw his younger digital self? “I could extend my career another 30 years,” he joked.

The movie will be released in a limited number of theaters in the United States on November 1, before it appears on Netflix from November 27.

With “The Irishman” Scorsese returns to the gangster movie genre, following “Goodfellas,” “Casino” and “The Departed.”

But this film adheres more closely to real-life facts and characters.

It also sets a slower, calmer pace than those earlier films, taking a step back as Sheeran, as an old man, takes stock of his life in a series of flashbacks and examines the morality of each event.

The movie also revolves around a key episode of his relationship with Hoffa, in 1975.

“He finds himself at the most important point of his life in moral conflict because he’s basically a good man,” said Scorsese.

The director also makes greater use of dialogue, in particular, humor, illuminating scenes between acting giants De Niro and Pacino.

Scorsese said he wanted to evoke the atmosphere of the 1960s as a violent time when it seemed like “everybody was getting shot,” starting with President John F. Kennedy.

Seemingly tracing a link from those events to the current day, the director described “the true dark forces that are in our nation.”

“It doesn’t happen maybe with one gunshot,” said Scorsese cryptically. “It happens on every level incrementally and before you know it, it’s over.”