Wells Fargo on Friday named Charles Scharf as its chief executive, making good on a promise to appoint an outsider as it tries to pivot from a number of scandals.

Scharf, who has been chief executive of Bank of New York Mellon, will move into the top spot at Wells Fargo on October 21.

Prior to Mellon, Scharf worked as chief executive at Visa and in senior roles at JPMorgan Chase.

His top priorities will include persuading the Federal Reserve to lift a cap on its balance sheet growth imposed after a number of regulatory messes, especially a fake accounts scandal in late 2016 that was a factor in the departures of the last two CEOs.

He also comes as large retail banks invest more heavily in mobile technology programs for banking and payments that have altered the role of bank branches. 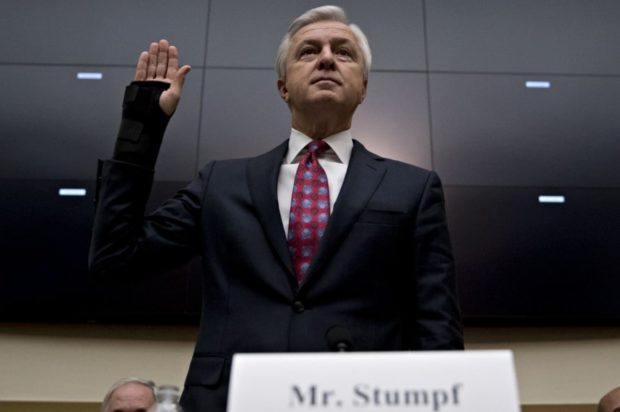 “This company obviously has a series of extraordinary franchises,” Scharf said in a conference call with analysts.

“There are clearly challenges. The company is clearly focused on those challenges and putting them behind us.”

Currently the third-largest US bank by asset size after JPMorgan and Bank of America, Wells Fargo is among the biggest US retail banks and a major player in mortgage finance.

The company launched a search for a new CEO in March after Tim Sloan stepped down.

Sloan, who had been president of Wells Fargo prior to being named CEO, faced skepticism on Capitol Hill over his response to the fake accounts scandal and other problems. Wells Fargo Chair Betsy Duke had from the start signaled the company sought an outsider as the next leader.

She praised Scharf as a “proven leader” with a “strong track record in initiating and leading change, driving results, strengthening operational risk and compliance, and innovating amid a rapidly evolving digital landscape.”

Duke said interim chief executive Allen Parker would transition back into the role of general counsel after Scharf joins the company.