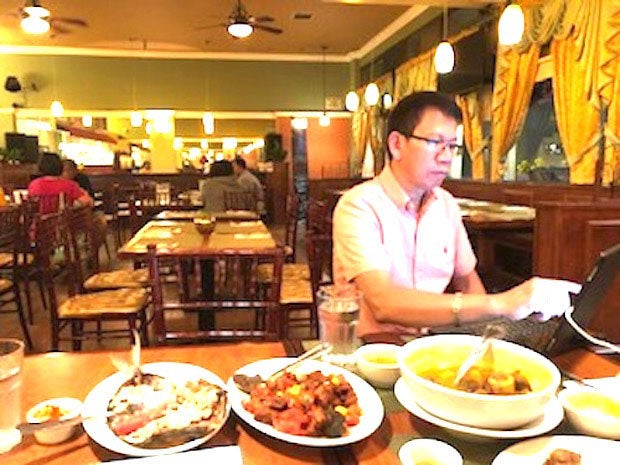 DALY CITY, California — Willy Carandang used to push carts of used plates, glasses, and flatware from dining tables to the dishwasher.  Today he drives a Tesla from his 6-bedroom residence in a gated community in the sylvan environs of Brentwood, westward to his family’s restaurant in Daly City from where he runs a catering empire.

Where there’s a milestone being celebrated, the Batangas-born entrepreneur predictably would be front and center, overseeing execution of the party, from décor to presentation, and most of all, the menu and service.

If a visiting bigwig from the Philippines is being hosted at the Philippine Consulate or the chancery, chances are the diligent restaurateur would be present, directing a 4-person crew.

His restaurant is where every area political campaign seems to be launched.

Carandang, 57, runs out of fingers in naming aspiring, current and former Daly City Council members, who have announced their candidacies at private fetes in Hapag Filipino at St. Francis Square on Southgate Avenue in Daly City, California. 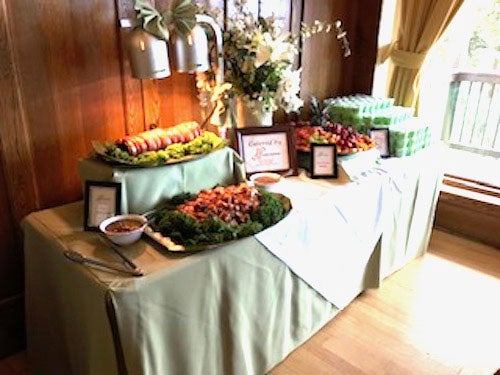 Hapag Filipino’s take on Italian porchetta is the “bellychon” and riffs off French Laundry’s salmon cornets with cones stuffed with lechon.  CONTRIBUTED

“Maybe we’re lucky,” Carandang suggests a reason why half of his week is typically booked for catering commitments in-house or offsite.  Fortune, indeed, is on his side, but effort has as much to do with his success.

“We try to comply with whatever the client wishes,” says Carandang, whose life has been one big feast, with wife Norie Abellana Carandang and three of their five children, all certified chefs.   Together they plan celebrations as if each were their own.  “When they (customers) are happy, we’re happy.”

That desire to please earned him fame earlier as “Lechon King.”

His is a genuine American Dream story.

Like many new arrivals in this country, Carandang had to gain local experience in the San Francisco Bay Area.  He was thankful to be hired at Ongpin in South San Francisco, a no-frills restaurant named after a food district in downtown Manila.  With his quick smile and earnestness, he won the attention of co-owner Bambi Fernando who offered partnership in a new venture, Tastebuds, he was planning in nearby San Bruno.  Carandang jumped at the opportunity to fulfill his vision of a gathering place where Filipino Americans would satisfy their appetite for the cuisine they had left behind and also show off to their non-Filipino friends.

The Third Millennium had entered its second decade, ushering a new generation of Philippine foodies reinventing and redefining food in the archipelago.  The Food Network created celebrities out of cooks, developing a new art form, a performance art.  Filipino American cuisine and its culinary community followed closely, but with chefs now drawing from their ancestral pride to identify their style and product.

The once-lowly sisig, for example, rose to cult status, reincarnating in fish and tofu variations for other-tarians.  Though less adventurous than the Philippine original made from chopped pig face, sisig became a fixture in Fil-Am restaurants.  But like lumpia and pancit, adobo, kare-kare or the egg-rice-fish or meat combo called “silog,” every eatery had it. 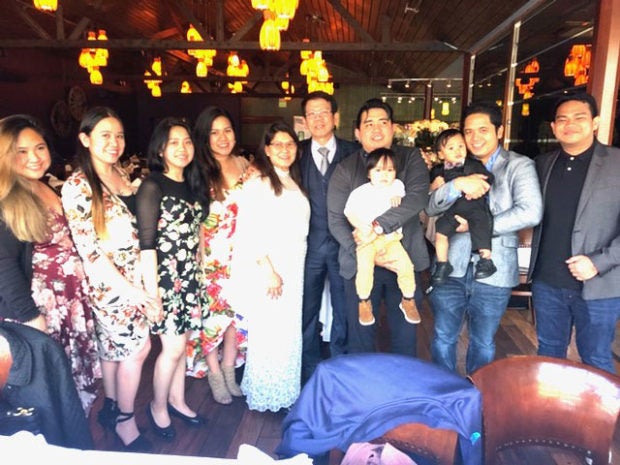 Four of the Carandangs are certified chefs, and each one is trained in the many aspects of their enterprise.  CONTRIBUTED

In the midst of pondering how to stand out, Carandang, who was responsible for catering services, had a flashbulb moment.

“Since we were already preparing lechon on orders for catering, I proposed serving it in our dining room,” he looks back at the early days.  “No one was doing that.”

Lechon is not really an everyday item, not even in the land of its birth, except in certain places around the church in Baclaran, a magnet for supplicants jonesing for a big meal after walking to the altar on their knees for a divine request.

Always the centerpiece at important occasions, the lechon crowns a celebration.  At Tastebuds, the bronzed delicacy gilded the buffet.  Unapologetically.  Because, in Carandang’s mind, hardworking folks deserve to reward themselves whenever they please.

His idea was genius.  The restaurant and the partnership behind it just passed its 11th year.

Five years ago, the older Carandang children began graduating from college.  Jewel, now 30, completed her nursing program.  John, 27, Tiffany, 25, and JR, 21, all earned culinary and hospitality certificates.  The youngest, Janna, is 17 and in high school.

They had helped out in various ways at the San Bruno collaboration and were eager to conceptualize and materialize their vision of restaurant.

Eventually, the summer of 2014 saw the opening of Hapag Filipino near Serramonte Center in Daly City.  Fernando and his daughter Michelle, who took over the former’s post at Tastebuds, attended the opening of their partner’s enterprise.  So did the leadership of Daly City and neighboring governments.  Finally, “New Manila” had a Filipino restaurant that would showcase Filipino hospitality the way Tito Rey did in the 1980s, but with millennial sensibilities contributed by the Carandang brood.

The dining room is reminiscent of those in homes on the Philippine countryside, with sliding windows inlaid with capiz shells.  The bespoke chairs reflect the bamboo, metaphor for the Filipino psyche – strong because of its resiliency.  Buffet is served at lunch.  With lechon, naturally;  $14.95 on weekdays, $19.95 on weekends.

The restaurant was named to showcase the owners’ pride in their heritage.  Hapag Filipino would be the Philippine counterpart to Italian master Lydia Bastianich’s parting shot: “Tutti a tavola a mangiare” or “Everyone to the table and eat.”  Paraphrased, it’s what Filipinos are apt to say as soon as a guest enters the home: “Kain na.”  Bastianich had the same beginnings as Carandang, having started out as a restaurateur before becoming a PBS star teaching viewers her brand of “casalinga” or home cooking.

Hapag means dining table, center of togetherness, family and community.  Several long tables reinforce the name along the perimeter of the restaurant, where community leader Ray Satorre last year hosted an SRO fund raiser for now Mayor Ray Buenaventura’s re-election run.  It’s also where a disabled diner  would erupt in excitement without anyone complaining, because the restaurant promotes inclusion. 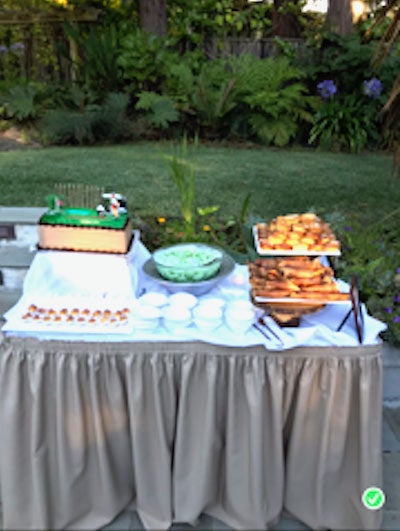 Carandang considers staging a garden birthday party featuring an all-Filipino menu for a retired PH multimedia CEO as the icing on the cake for his catering career.  CONTRIBUTED

From Tuesday through Sunday, Tiffany – her dad’s right hand – calls the shots, taking orders to go, monitoring production, service and delivery.  Norie would be tallying receipts before the dinner rush.  If it’s Tuesday, Willy would be around with his ubiquitous laptop, going over their multiple engagements on the weekend while virtually supervising operations at the San Bruno restaurant in real time.

The Carandangs, as Emeril Lagasse might say, “kick it up a notch.” The menu has typical offerings like Crispy Binagoongan, which is Lechon Kawali embellished with shrimp paste, and then there’s Kansi, a beefy soup perfumed with green jackfuit, perhaps little known outside of the Visayas where Norie was born and raised.

“We serve food representing the many populations in the Bay Area,” Carandang says, swiping his laptop to give Inquirer.net a glimpse of international specialties from pastasto jap chae and roulades, to tacos lined up in chafing dishes at previous parties for organizations of doctors, nurses, and priests from a guest list of a dozen to 500.  “We recently catered twin events serving 400 at lunch and then 500 at dinner,” he shares a logistical feat achieved by a team of 5, two trucks and a couple of extra help to prep.

Carandang has fulfilled his mission to present Filipino cuisine and hospitality to the mainstream through his restaurant and catering.  And yet he counts his greatest compliment as having been asked by the retired CEO of a Philippine multimedia network to cater his birthday party for intimates at his Hillsborough home and be introduced to guests as “my caterer.”

“He could afford any top provider and he chose us,” says Willy, who documented the sophisticated staging for the all-Filipino menu topped by a lechon, of course.

He shares his success with community-based organizations that support newcomers like he once was, knowing the value of that big break that catapulted an ex-busboy to the Fil-Am catering king.