Day 1 of Nurse Strike in California, Arizona and Florida

Registered nurses staged a one-day strike against Tenet Health hospitals in Florida, California, and Arizona on Friday, demanding better working conditions and higher wages as the nation’s labor movement has begun flexing muscles weakened by decades of declining membership amid the business and government attacks.

About 6,500 National Nurses United members walked out at 12 Tenet facilities after working toward a first contract.

For a year in Arizona and under expired contracts for months in California and Florida, the union said.

They plan to resume working on Saturday.

Members also passed out leaflets in Texas, where contracts at two Tenet hospitals in El Paso expire later this year.

The Tenet walkout is one of several strikes and organizing efforts nationwide as unions work to rebuild from a steep membership decline that began 50 years ago.

Many are focusing on white-collar, female-dominated and service-sector industries such as health care, teaching, and the media and not just blue-collar.

Male-dominated industries like manufacturing, where the United Auto Workers are striking against General Motors.

A recent Gallup poll showed Americans support unions by a 2-to-1 margin, up from a near split 10 years ago and nearly the highest level since the 1960s.

They waved red flags with a white N and carried signs with such slogans as “Happy RNs = Healthy Patients.” 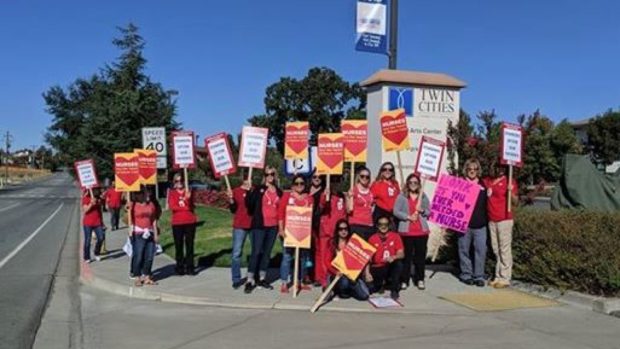 The company is offering raises of about $12 a week at Palmetto — they particularly want a lower patient-to-nurse ratio to avoid burnout and improve care.

Gillian Edwards-Brown, a critical care nurse, said the current patient-to-nurse ratio makes it hard to establish relationships with people in their care.

“What I enjoy is seeing people coming in (a bad) state and getting them well, but the last couple years have been difficult,” said Edwards-Brown, a nurse for 19 years.

Tenet, which has 65 hospitals and 115,000 employees nationwide, issued a statement saying it has negotiated in “good faith” and it is disappointed the union chose to strike.

“While we respect the nurses’ right to strike, patients and their loved ones can be assured that our patients will continue to be cared for by qualified replacement registered nurses and other caregivers,” the Dallas-based company’s statement said. 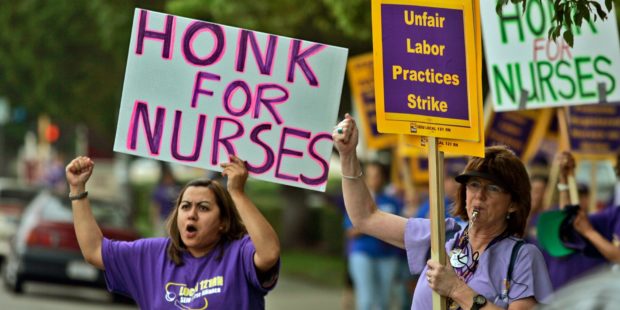 According to the U.S. Labor Department, almost 3 million registered nurses are employed nationally, with an average annual salary of $75,510.

Union membership has plummeted in the U.S. since the 1970s.

About 10% of American workers are unionized today and only 7% in the private sector, down steeply from 40 years ago when a third of workers were represented, as jobs shifted from manufacturing to the service sector.

When adjusted for inflation, the average American’s wage has remained stagnant during those decades, according to the Pew Research Center.

With support from business groups, Wisconsin and Michigan, both states with strong union histories, adopted “right to work” laws this decade that prevent private-sector companies and unions from negotiating contracts that require employees to pay union dues or fees.

Twenty-seven states, including Texas, Florida, and Arizona, have such laws.

The Supreme Court ruled 5-4 last year that government workers nationwide can’t be forced to contribute to the unions that represent them in collective bargaining.

But such setbacks may have spurred more union activism.

Almost 50,000 General Motors workers went on strike this week at 50 factories and warehouses as the UAW demands higher wages.

In health care, nearly 80,000 Kaiser Permanente workers plan a one-week strike next month to protest wages and labor practices at the hospital chain — organizers say it might be the biggest U.S. walkout since 185,000 Teamsters struck United Parcel Service in 1997.

Teachers walked out in several states over the last few years demanding higher salaries and more money for schools, including in Oklahoma, Arizona, Kentucky, and West Virginia.

In the media, unions have recently organized at several newspapers, including the Los Angeles Times, and at websites such as BuzzFeed, Slate, HuffPost, and Fusion.

Mary Anne Trasciatti, chair of Hofstra University’s labor studies program, believes unions are about to experience a growth period because of their improving public support, particularly among younger workers.

“You’ve got people who are really struggling who are saying, ‘Look our ‘leaders’ and our ‘status quo’ is not serving our needs’ and they are pushing back,” she said.