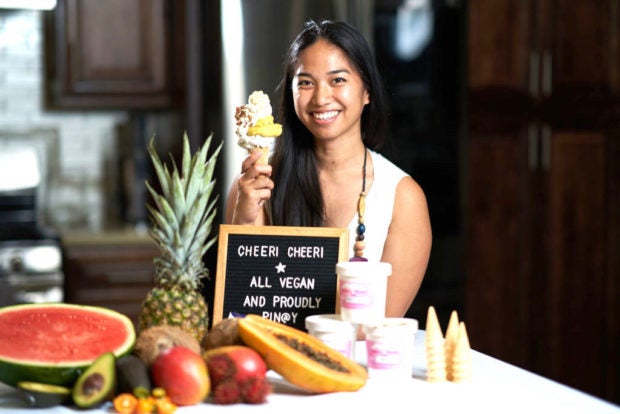 LOS ANGELES — It’s often said that food is a form of storytelling, its dimensions narrating our culture, identity, relationships, memories, decisions, and much more.

For Christy Cunanan, one of her fondest childhood memories was listening to her grandparents’ stories about their lives in the Philippines and the culture that has shaped her identity as a second-generation Filipina American.

In documenting family stories and memories, she chose to engage more with the content instead of just passively recording them.

By day, Cunanan has been a production coordinator at Walt Disney Animation Studios for the past five years, where she has worked on “Big Hero 6,” “Moana,” “Ralph Breaks the Internet,” and most recently, “Frozen 2.”

Showing her culture through dessert became that palpable route of sharing during her free time. The experimentation in late 2015 started at her childhood home in Pasadena, California, with Filipino-inspired doughnuts; but getting the right textures proved to be a challenge. Then, came the idea of ice cream in its traditional milk and egg formula.

“I wanted to share this beyond Filipinos because at work, I would hear people saying, ‘Wow you’re really close with your family. That’s not common,’” Cunanan recalled in a recent interview with the Asian Journal. “I didn’t know if that was a Filipino experience or my own experience, but I wanted to make sure that there was a strong intention of sharing that.”

Her lolo Cesar, who passed away after she started her endeavor, wasn’t the biggest ice cream fan, Cunanan admitted.  “But he loved the Philippines and it was about sharing his cultural pride,” she said. “I intended to make it clear that it’s coming from a point — regardless of if it was ice cream or doughnuts — that it is proudly Filipino.”

The first flavor Cunanan attempted was puto bumbong, after the rice cake delicacy traditionally served during the Christmas season. Next came calamansi, since her family had a tree in their backyard. Her family, close friends, and coworkers were the initial taste-testers for the creations.

“That’s the theme that resonated: What’s something that you would see in the Philippines but you don’t get to experience daily here? How can I bring that to you consistently in a way that makes either you think of someone or a personal memory?” Cunanan explained. “We’re not just thinking about trends or the younger generation, but all generations.”

One of the first tasting events held at Cunanan’s home was set up like a focus group, to test whether the various flavors reminded guests of the Philippines or their families. “I didn’t think a flavor was ready if it didn’t. If more people said yes, then it felt relatable to enough people,” she said.

The ice cream soon took a different turn after her mom adopted a vegan lifestyle, which the rest of the family followed in support of her. The recipes were modified to be plant-based, using coconut milk; they continue to be crafted in that manner to this day. 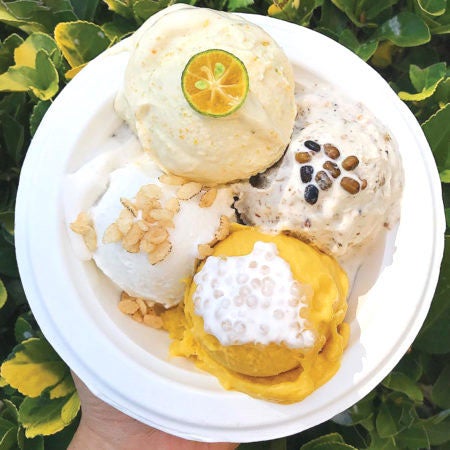 “When we look at Filipino cuisine before the Spanish colonization, even the desserts used rice and coconut milk, which are essentially vegan,” Cunanan said. “Beyond the meat, we sometimes don’t see that our diet at its roots can be considered plant-based.”

Her ice cream became an intersection of veganism and her Filipino heritage and a starting point to talk about both parts of her life.

“I was serving the ice cream to coworkers to test, and they had cones in their hands and they would cheer, which made me think of the feeling when I remember my lolo and lola,” Cunanan recalled. “It’s happiness and cheerfulness. Even though the name isn’t directly Filipino, it reminded me of the doubleness of names like Jun Jun, so that’s why it’s Cheeri Cheeri.”

However, in building the brand, Cunanan recognizes the importance of not making anyone feel left out, whether the brand’s cheerful tone or its vegan tag.

“It’s definitely been easier for millennials when they see ‘vegan.’ If you say this is for vegans, people may not see themselves in it. If you say this is a very happy product, people who may not feel that way will not see themselves either. How do you show something that’s honest? By leaning on that it’s dairy-free is the best way. It may matter that they want a healthier diet but they want it to taste good too,” she said.

The logo, which can also be interpreted as ice cream melting, represents Mount Arayat in Pampanga, where her lolo was from. On its side, the logo bears a silhouette of a woman lying down, to represent Maria Sinukuan, the mountain goddess Cunanan had heard stories about while growing up. “It’s a brand led by a female so I wanted to show land, femininity, and the Philippines all in one,” Cunanan added.

Pop-ups with various Filipino American chefs and restaurateurs, particularly in the vegan space, and food festivals have been the route for pushing Cheeri Cheeri’s flavors.

What makes Cheeri Cheeri stand out is the uncompromising fervor to champion Filipino flavors in addition to the ones we’re familiar with by now, such as ube. And Cunanan doesn’t see a need to translate or give them English names, noting that her brand could be the first point of contact to Filipino flavors for some people.

“I’m more focused on making a more level playing field so that customers are intrigued to try everything instead of just picking the most colorful one,” she said, putting her background in sociology to use.

“It’s about understanding how people might get excited about things and what means a lot to them… Since ube is such a strong purple color, it’s very easy to identify it, which is fantastic… But what happens to all the other flavors that are just as memorable or beloved but people might not take a moment to get to know?”

Buko pandan, for example, has been a hit among customers as an iteration of the dessert using young coconut, pandan leaves and sago pearls. However, with Cheeri Cheeri’s mission to be all-natural and organic, Cunanan doesn’t use any additives or extra coloring so it doesn’t have that vibrant green hue. 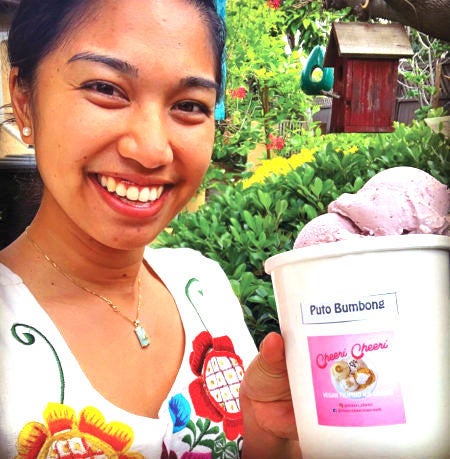 Christy Cunanan with a pint of the puto bumbong flavor. CONTRIBUTED

A savory dish like monggo, which uses mung beans and vegetables, may be intimidating to the unfamiliar, but creating it in ice cream form is a gateway to those tastes.

“If I had the real buko pandan, munggo or maja blanca, maybe someone would say those are ‘too strange’ but we hope that this is a start and people will have a good correlation,” Cunanan said.

For now, Cunanan is a solopreneur, with the help of a supportive family who scoops alongside her at events; but she is seeking opportunities to grow her business.

While the focus has been on the grander Filipino food movement nationwide, there are subsets to look out for, including those pushing plant-based cooking. Cheeri Cheeri has found itself at the forefront of this next progression of how Filipino ice cream is served and enjoyed.

“Once we start getting this going, we want this to be as accessible as possible so you don’t have to wait for a pop-up to try something,” Cunanan said. “Now, it’s about trying to find the right partners who have the same vision as that because it’s coming from the heart. It’s not just about getting it out there. It’s about getting it done responsibly.”

Currently, the buko pandan and maiz flavors are available at Tatang in North Hollywood. Special orders can be placed on the brand’s website and more plans are expected to come in the next year.

With Cheeri Cheeri’s foundation in family stories, Cunanan hopes the experience of trying the flavors will start that memory sharing within other families that can be preserved for generations to come.

“I’ve thought about how this shapes identity. I had my grandparents who made me proud to be Filipina and that’s fantastic that the next generation will have so many different influences to be even more proud,” Cunanan said. “This is my way of packaging something that’s truthful.”