A former American Airlines mechanic who prosecutors say may have some links to terrorists pleaded not guilty Friday to charges that he sabotaged an aircraft with 150 people aboard.

The plea came at a hearing in Miami federal court for Abdul-Majeed Marouf Ahmed Alani, 60.

He’s charged with deliberately disabling a key navigation component inside the Boeing 737 at Miami International Airport in July because he told investigators.

He was upset an ongoing labor dispute was denying him overtime work.

Prosecutors unveiled evidence earlier this week indicating Alani, an Iraqi-American, may be sympathetic to terrorist groups such as the Islamic State.
Alani purportedly told co-workers his brother is a member of the extremist group.

Stated that he hoped Allah would harm non-Muslims and the FBI reported finding violent Islamic State videos on his cellphone.

All the stars! We've been named a Five Star Global Airline by @theAPEXassoc — ratings are based on feedback by more than one million customers in five categories: seat comfort, cabin service, food and beverage, entertainment and Wi-Fi. Way to go #AATeam! pic.twitter.com/Z0NCNZNJ1P

No terrorism-related charges have been filed.

“Some things that may have been alleged are not true,” Meltz told reporters after the brief hearing.

“It has absolutely nothing to do with terrorism.”

He added: “We’re looking forward to the whole truth coming out.”

Alani, wearing tan prison garb and listening via headphones to an Arabic interpreter, did not speak at the hearing. 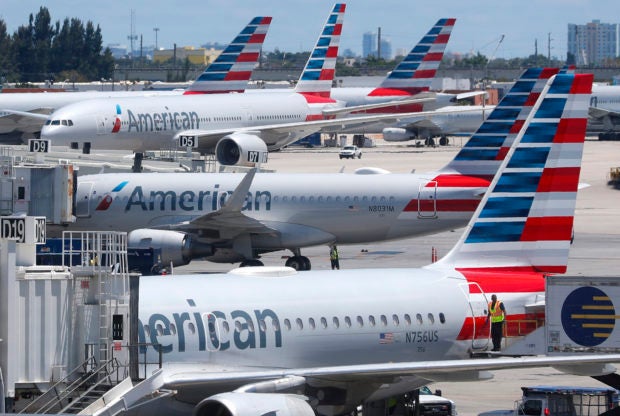 FILE – In this April 24, 2019, photo, American Airlines aircraft are shown parked at their gates at Miami International Airport in Miami. A former American Airlines mechanic who prosecutors say may have some links to terrorists is due to enter a plea to charges that he sabotaged an aircraft with 150 people aboard. An arraignment hearing is set Friday, Sept. 20, 2019, for 60-year-old Abdul-Majeed Marouf Ahmed Alani in Miami federal court. (AP Photo/Wilfredo Lee, File)

An aircraft mechanic for 30 years with no prior criminal record, Alani is charged with sabotaging the airliner.

Because ongoing labor negotiations were jeopardizing his chances of earning overtime, according to a criminal complaint.

The American Airlines aircraft did not take off and no one was injured.

And Alani did work overtime to help fix the plane.

He faces up to 20 years in prison if convicted of the charge of “willfully damaging, destroying or disabling” an aircraft used in commercial aviation, or trying to do so.

The sabotage involved gluing a piece of Styrofoam inside the nose of the aircraft that effectively disabled a navigation component pilots depend on to gauge such things as airspeed, the pitch of the plane, and other key data.

Authorities say the problem was detected just before takeoff when an error message appeared on a screen in the cockpit and the jet returned to a gate.

It had been bound for Nassau, Bahamas.

Airport surveillance video showed Alani working on the aircraft’s nose compartment for seven minutes, even though there was no repair issue with the plane.

He was later identified by co-workers from that video and was arrested earlier this month after returning from a trip to visit family near San Francisco.

Other actions prosecutors say raise terrorism concerns about Alani is a visit to Iraq in March and a recent wire transfer of $700 to an unknown person in that country.

Alani does have extended family in Iraq, his lawyer said.

No trial date has been set.