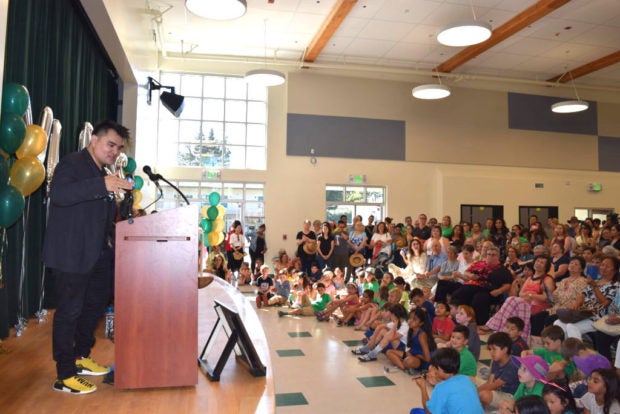 Audience at a crowded school auditorium listens to Vargas during the dedication ceremony of the Mountain View elementary school named after him. AJPress/Joseph Peralta

MOUNTAIN VIEW, California — After seeing two schools close down in the city over the past 19 years, an elementary school named after a Filipino Pulitzer Prize-winning journalist and immigration activist was officially opened in a dedication ceremony on Thursday, Aug. 15 attended by district officials, faculty and community members.

The newly built Jose Antonio Vargas Elementary School, which will initially offer kindergarten to 4th Grade due to district rezoning, is named after the undocumented Filipino American immigrant rights activist who has roots in Mountain View.

Vargas was thrust into national prominence when he revealed in 2011 that he was an undocumented immigrant, having been brought to the United States in 1993 at the age of 12 to live with his grandparents.

He has narrated his story in a 2013 film called “Documented” and in a memoir, “Dear America: Notes of an Undocumented Citizen,” published in 2018. 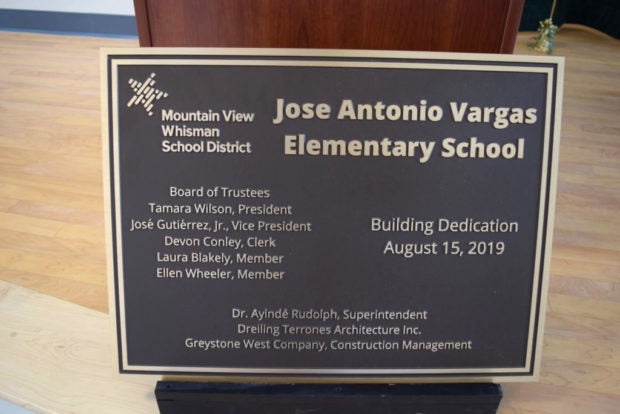 According to current school district Board of Trustees President Tamara Wilson, who was then Mountain View Whisman trustee, the Obamas and Vargas were neck-to-neck during the count, followed by Moore, and it all came down to a board vote.

“I believe it was four yes and one abstention on voting for Mr. Vargas as the name of the school,” Wilson told the Asian Journal.

For his part, Mountain View Whisman School District Superintendent Dr. Ayinde Rudolph related to the Asian Journal that the School Board of Trustees went into further deliberations as members wanted to also honor the other top choices.

“So, they named the preschools after Barack & Michelle Obama, and dedicated the new boardroom to the former board member, which is now known as the Gail Urban Moore Leadership Center,” he said.

In his speech before a jam-packed auditorium on Thursday, Vargas confessed to nerves as he was preparing the night before the dedication ceremony.

“I have been traveling nonstop all across the country. I’ve given a thousand speeches in eight years probably. I even speak to people who don’t like me, who don’t agree with me,” he said, to audience laughter.

“You think that someone who gives that many speeches will be fine with this…This has been very nerve-wracking to write this speech, and I think I’ve been so nervous because I have never given a speech in front of an elementary school.”

But he received advice, he said, from a new friend, who has been a teacher for a long time, and who told him that “they [the students] are safe with you if you are honest with them.”

After stating, “So, I’m going to be honest,” Vargas described himself as a storyteller and told the audience how he and his friends founded Define American.

“And since I am a storyteller, Define American was founded on the power of stories and the fact that all of us, regardless of where we came from and what we look like and what we sound like, all of us have a story. We tell stories to bring people together…regardless of what makes us different, we also have many things in common,” Vargas said.

He told his story of being brought to America as a 12-year-old to live in Mountain View, about a mile away from this new school. Despite not speaking English all that well, Vargas managed to become friends with a student who initially remarked to him that he was weird, on his first day of school. 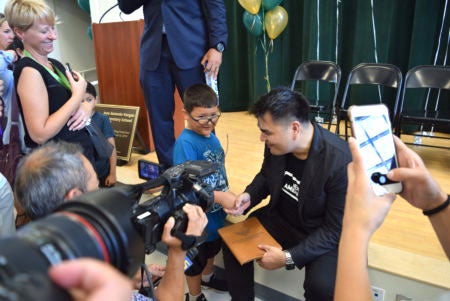 “School wasn’t just a place where I made friends. School was a place where I was mentored and encouraged…where I was protected and mentored by teachers who didn’t just care about my grades, but they actually cared about who I was and where I came from. They cared about my story,” Vargas stated, after which he introduced Jill Denny, his choir teacher, who was in the audience.

Vargas had revealed to Denny that he was an undocumented immigrant, which was the reason why he could not go and join the choir as they prepared for a trip to Japan. Denny changed the plan and instead moved the trip to Hawaii, telling Vargas that “we don’t leave anyone behind.”

School, Vargas revealed, was his safe place where he always felt he belonged: a venue where he enjoyed math and science; learned about geography and music; and where he learned how to read and write, which “makes me the most free and the most myself.”

“But here’s the truth. The truth is, this school is named for someone who some people think should not be here. The truth is, there was a time in our country in the early 1930s where, in the city of Stockton, about two hours from here and where my cousin lives actually, there were signs outside restaurants, hotels…that actually read, ‘Positively no Filipinos allowed,’” Vargas narrated.

However, he remarked that he “would not be the human being I am without my community.”

“So, when people ask me how I define American, I define American as community – the community of people who see you and make you feel at home,” he said, while adding how blessed he was to have the family he was born into, and fortunate to have a family of friends and mentors whom he has met since he came to the U.S.

For Vargas, the ultimate magic in life is finding a way of connecting with another person, and he feels confident that school officials and students together will write the new story of the school.

He ended his speech by saying, “I’m so proud to say, ‘Welcome to Jose Antonio Vargas Elementary School!’ and please have a magical new year.”

Meanwhile, Filipino Americans present at the dedication ceremony expressed pride in having a school named after Vargas.

Sarah Reginaldo, who is president of the school’s Parent Teachers Association (PTA), said she felt happy that “we are being represented in the area because a lot of Filipinos live in Mountain View.”

Reginaldo said that if she gets asked who Vargas is and why this particular school is named after him, she will explain it this way, including to her son who will be attending this school: “When we choose names for our monuments and hospitals, we choose people who have done great things for this nation and for the world. And Jose is trying to do a lot of good things with immigration reform – there are a lot of people whose lives will be affected by what happens next.”

For her part, Aida Rivera, who is one of Vargas’ aunts, exclaimed, “No words can really describe how proud we are as a family, as a community. It is unusual to name a school after an individual who is still alive; normally it is when they have passed away that they are given this recognition. This is a great honor given to a fellow Filipino who is humble and who continues to fight for the rights of undocumented persons.” 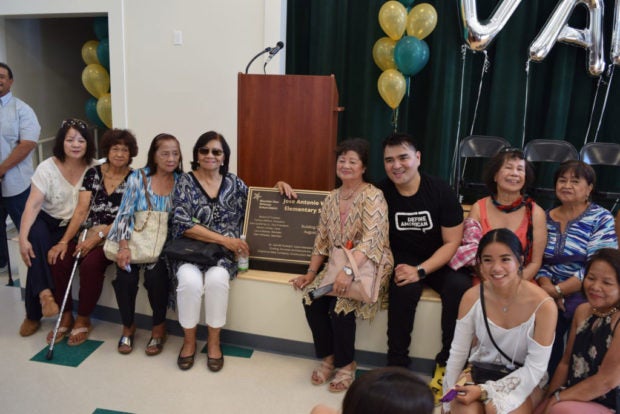 School Board of Trustees President Wilson said the choice of Vargas shows that “no matter what your background is, if you come here and you work hard in school, you will be able to succeed. And he is one of our most successful, renowned graduates.”

The school’s principal, Vernorris Taylor, told the Asian Journal that naming the school after Vargas was a great idea to honor an individual who has been a part of the community.

“He is a local hero who has had challenges that he’s overcome. He is someone who took a risk in a real way by coming out as an undocumented immigrant in an atmosphere that’s not necessarily friendly to undocumented immigrants. He showed what true bravery is, risking his own personal livelihood especially when he did not have to,” Taylor explained.

Initially thought it was a ‘joke’

Over multiple interviews with officials at the event, Rudolph revealed to the Asian Journal that when he contacted Vargas on Twitter about naming the school after him, the latter thought it was a joke.

“I said, ‘Hey, I wanna let you know this is what’s actually occurring.’ Then he told me when he got the message that [he thought] I was joking. So, then I responded back, ‘No, it’s not a joke.’ Then he checked the board minutes and he could hear the board president — she wasn’t president then — announce that she would like to name the school after him. From there, I asked him, ‘Are you okay with that? I know that this would draw attention to you.’ He said, ‘It’s perfectly fine,’” the superintendent related.

This was confirmed by Vargas.

“I actually told him, ‘I’m not dead yet.’ This usually happens when they’ve died,” Vargas told the Asian Journal, while adding that he did not pay any attention to it because he felt sure someone was going to say that the school board should not do it.

“But to me, it’s incredible that it happened,” he stated. “It’s been such a humbling experience, and I hope I don’t do anything to screw it up.”

Vargas cautioned people against putting him on a pedestal.

“That’s the thing, I don’t really want to be looked up to,” he revealed. “I am a human being, I’m imperfect, I’m totally flawed like we all are. And I think I’m just trying to do the best that I can. Hopefully, everybody can do what they can do in whatever community they’re in.”

“To me, the biggest message is, Filipino Americans have to participate and engage in America. We actually have to participate, we have to be civically involved… so I wish my own family would do more of that as well, and hopefully more Filipinos would do that,” Vargas said.