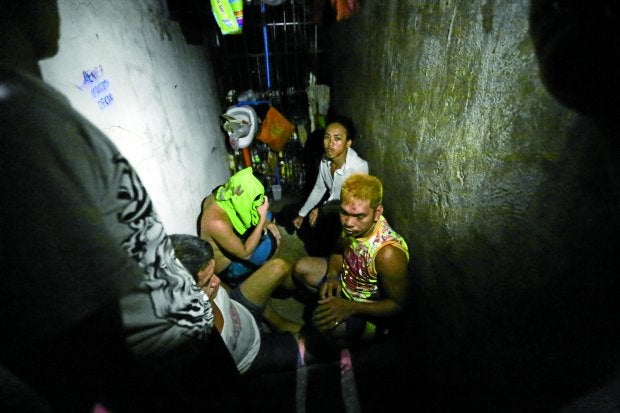 Detainees in a secret cell at a Tondo, Manila police station. INQUIRER/Raffy Lerma

It’s now clear that there are two shades of greed in the Duterte Slaughter.

Greed has led police, vigilantes and funeral parlor owners to find creative ways to make money from the mass killing, as I noted in last week’s column.

Now comes an unexpected, revolting twist. In a small Manila police station, greed also saved the lives of about a dozen Filipinos who have become unlikely survivors of the Duterte Slaughter.

To be sure, the detainees found in the secret jail cell in Tondo are also victims of Duterte’s inhumane campaign. They were abused, tortured, terrorized by police, who were sometimes high on drugs, according to accounts of the raid.

But the detainees did not end up on the Duterte Slaughter kill tally because police who routinely receive a bounty for every alleged criminal they kill realized that not killing the people they abuse could mean even more cash.

The people rescued by the Commission on Human Rights had been accused of being involved in illegal drugs. But like thousands of victims of the Duterte Slaughter, they had not been formally charged.

In the new normal under Duterte, they should already be dead.

But their lives were spared because their captors came up with a bright idea: Keep the captives alive and extort money from their families.

One can just imagine how this idea was discussed with the colorful language of the presidente who inspired the murderous campaign.

[‘Sir, let’s not kill them. We can make more money if we demand money from their families.”

‘That’s right. Okay, just throw these sons-of-bitches into that small corner. Just cover it up with the bookshelf so it’s not obvious.”]

But the scheme was exposed  after journalists and a CHR team, acting on a tip, made a surprise visit to the precinct.  The station commander denied that he was maintaining a secret cell.

But then came a voice from behind the precinct wall: “Someone’s here. May tao dito.”

Video of the discovery of the secret cell is hard to watch. You see the bookshelf being pushed to the side, revealing a dark space where the captives were kept. A woman is seen crying about how she was forced to leave her children. They’ve been held there for days, another prisoner says.

Veteran photojournalist Alex Baluyut described what they saw in a Facebook post: “The approximately 3 feet by 15 feet long cell was filthy beyond words and had no windows and no light when we opened the secret panel the men and women were kept together. The families of the victims were asked to pay 40-100 thousand for their release. According further to the suspects, policemen themselves took Shabu in front of them and demonized them as if they were captured animals.”

I look forward to learning more about the station commander, Roberto Domingo, who had the balls to try to defend how he kept the prisoners in such a dehumanizing condition: “It’s such a waste of space. Why should I not maximize it?”

In his latest tantrum, Duterte called the New York Times an “asshole” for its Pulitzer Prize-winning coverage of the Duterte Slaughter.

The raid on the police station in Tondo shows that the New York Times is the least of Duterte’s problems as he and his supporters hope for more sympathetic coverage of his bloody campaign.

The poor captives were rescued thanks to fearless reporting of Filipino journalists, especially photojournalists who have taken on perhaps the most dangerous and emotionally gut-wrenching assignments in recent years.

“This daring raid was a result of excellent Journalism and the pursuit of truth and justice,” Alex Baluyut wrote. “This is the reason I became a photojournalist and at my age, it felt good to pound the corrupt and failed system yet again.”