Making a killing from the Duterte Slaughter

Making a killing from the Duterte Slaughter 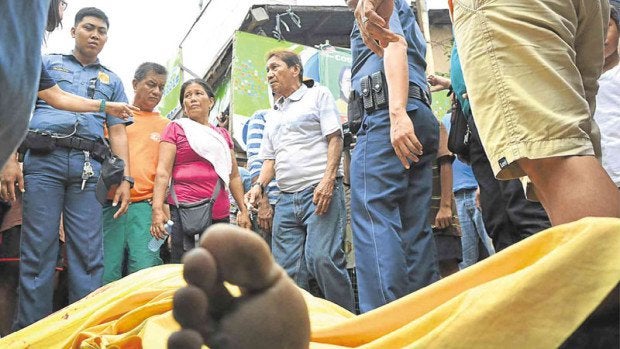 To understand the Duterte Slaughter, it pays to remember the catchphrase from the Hollywood classic “All the President’s Men”: Follow the money.

That’s because one thing has become clear: People taking part in the bloody campaign, from police, to vigilantes to funeral parlor owners, are making a killing from all the killing.

The Duterte Slaughter, while supposedly about fighting crime and illegal drugs, is also about money and profits.

Last week, Reuters cited an unpublished report that “support and expand upon previous investigations of the drug war” conducted by the respected news agency and other independent human rights organizations.

Among the findings mentioned in the news article by veteran journalists Manny Mogato and Claire Baldwin: Police get 10,000 pesos, or $200, for every person tagged as a drug suspect or anyone tagged as a troublemaker. Reuters also said “the cash ‘reward scales’ for drug killings range from 20,000 pesos ($400) for a ‘street level pusher and user,’ to 50,000 pesos for a member of a neighborhood council, one million pesos for ‘distributors, retailers and wholesalers,’ and five million for ‘drug lords.’”

The Reuters article was also based on an interview with an unnamed police commander who was critical of the Duterte Slaughter and who told the news agency that police officers kill both for money and out of fear.

Echoing the complaint that the Duterte campaign was targeting only the poor, the commander told Reuters, “Why aren’t they killing the suppliers? Only the poor are dying.”

In fact, the abuse of poor Filipinos does not end with their deaths.

A recent report by Amnesty International, one of the world’s leading human rights organizations, said police “often add insult to injury by stealing from families as they work a crime scene and by running a racket with funeral homes that increases costs on grieving families, who at times are forced to borrow money to receive the body for burial.”

One police officer in the campaign told Amnesty International that “police get a cut from funeral homes for every body they bring.”

“Sometimes 10,000 pesos,” the officer said. “Sometimes if I’m the investigator, I’ll bring the body to the biggest and most expensive [funeral home], because they give the biggest cuts.”

The Amnesty International report said the abuse of the families of victims became so brazen that some poor Filipinos “were now quickly burying bodies before SOCO [Scene of the Crime Operatives] arrives in order to avoid incurring funeral costs they could not afford.”

The Duterte Slaughter is now a major tragedy, condemned by respected organizations worldwide. For many participants in the killings, however, it is an opportune time to make a lot of money.