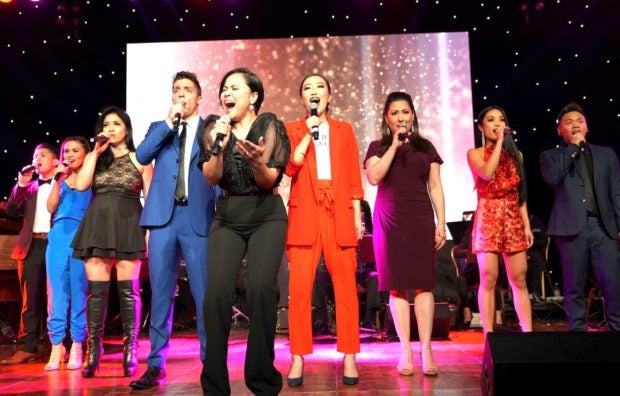 LOS ANGELES — Joan Almedilla leads a bevy of Filipino American actors in East West Players’ production of the musical “Mamma Mia!” this May.

The jukebox musical features the music of Swedish group Abba and includes songs such as “Take a Chance on Me” and “Money, Money, Money,” among others.

The story involves Sophie, who is about to be married to Sky. She secretly invites three men (Sam, Bill and Harry) to find out which among them is her father—which, of course, upsets her mother Donna.

Almedilla will play Donna. She will be joined by Anthea Neri (Tanya, one of Donna’s friends), Alan Ariano (Sam), Danny Bernardo (Harry) and Michael Palma (Bill).

Joan Almedilla recently concluded her run as Lady Thiang in the national tour of the “The King And I” opposite Jose Llana who played the King of Siam.

“The tour was great,” she says. “My son, CJ Uy, was also in the show with me as one of the royal children. It was an amazing experience on and off stage for both of us. It was a dream come true to do a classic Rogers and Hammerstein musical.”

Her other credits include Broadway productions and national tours of “Miss Saigon” as Kim and “Les Miserables” as Fantine.

She was recently in Fil-Am playwright Giovanni Ortega’s “Criers for Hire.”

“It’s like I never left,” Almedilla says of returning to East West Players for another production. “I love coming back here and I will keep coming back whether I’m part of a show or be in the audience. I also would love to do something on the creative side one day. I love the community here.”

“I can’t believe I get to play Donna!” she says. The seasoned actress says two of her favorite ABBA songs are “Thank You For The Music” and “Dancing Queen.” The happiness extends to rehearsals for the show. “There’s too much fun going on. On our second week, we were all in ‘80s outfits. That was our first dress up theme of many.”

If it sounds like Almedilla and her colleagues don’t take themselves too seriously, they certainly take their work as storytellers seriously.

She says that her favorite moments are collaborating with director Snehal Desai, choreographer Preston Mui and musical director Marc Macalintal in action.

“I love watching them going through that artistic exploration on the spot, when they’re thinking and they say, ‘Give it a try,’ and if something doesn’t read well or sound right, they suggest trying a different approach.”

“You make choices and explore during the rehearsal process and you grow. You discover more about the character you play, your fellow actors’ character and it gets even more fun.”

After “Mamma Mia!” Almedilla will be in “Supportive White Parents,” a musical with book and lyrics by Fil-Am Joy Regullano, in June.