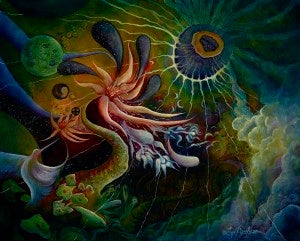 The Beginning by Lynn Pacificar, who is among the artists whose works will be exhibited at the Croatian Cultural Center in Los Angeles.

LOS ANGELES, CA – The Association for the Advancement of Filipino American Arts and Culture (FilAm ARTS) and Philippine Expressions Bookshop in partnership with the Croatian Cultural Center of Greater Los Angeles proudly present BUKLOD: A Gathering of Filipino and Filipino-American Art and Artists.

Over 50 works of art by Filipino and Filipino American artists are featured in an exhibition at the Croatian Cultural Center of Greater Los Angeles from May 4 to May 11.

Although many Filipino American artists have been recognized in the art world, their cultural heritage is rarely highlighted. Neither has there been a body of work categorized as Filipino American masterpieces in the 600 years of the history of painting. The artists of BUKLOD strive to fill that void with works that “instill culture, dignity and imagination to a cultural landscape that seldom acknowledges and habitually denies them their shared humanity.”

This exhibition features contemporary LA-based artists who anchor their work with their heritage and have an active community involvement. Accompanying BUKLOD is a collection of color prints curated by Edwin Ramoran from the works of Filipino American masters, many of whom have successfully become part of museum collections in the United States.

Another accompanying exhibit is a set of monumental sculptures of National Artist Napoleon Abueva and Filipino master Solomon Saprid from the collection of Linda Nietes-Little.

The Opening Reception will be held on Saturday, May 6 from 6:00 p.m.-9:00 p.m. and will include live performances as well as food and artisan booths. Details will be announced within the forthcoming weeks.

Artists featured in this exhibition are: 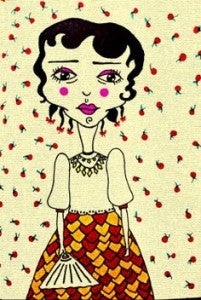 Filipiniana by Hana Acabado or ACBD. Her works will also be featured at the Croatian Cultural Center exhibition in Los Angeles. PINTEREST

Hana Acabado, or Hana ACBD, a Filipino illustrator and designer based in Los Angeles. Hana is a multimedia arts graduate of De La Salle College of Saint Benilde – School of Design and Arts and has exhibited her work in Manila, Philippines; Richmond, Virginia; and Los Angeles. Hana has worked for local and international clients such as GMA Network, a four-book illustration deal in Australia and New World Cosmetics.

Diyan BukoBomba is a self-taught multimedia artist, solar pyromaniac, musician and community organizer. She uses creation as a way of finding freedom from inner pains and colonial traumas. She recreates “folk art” and reimagines indigenous and ancestral art as part of her healing process, to indigenize, decolonize and reconnect with her ancestors and native roots.

Champoy (born Janeil Sumampong Lim) is an LA-based artist born and raised in the Philippines. He primarily draws comics with patterns and humorous images lifted from his personal cosmology. He teaches workshops on woodworking, comics, murals and puppet-making. As a teaching artist, he likes to instigate and encourage creative atmospheres, allowing play and flow in everyday consciousness to occur, something which he believes is very essential to his own creative process.

Nicanor Evangelista Jr.`s creative energy is channeled through music, art and cinematography. A descendant of Tagalog/Kapampangan and Macao/Visayan ancestry, his creative energies and intuition is influenced by sacred geometry and ancestral indigenous arts. His love for nature and the ancestors is what fuels his spirit to create and capture beauty.

Lyn Pacificar is a Filipina American artist and lineage healer born in Los Angeles, of Ilonggo and Waray descent. Pacificar is an oil and mixed media painter, who uses indirect painting methods by building depth through underpainting and glazing techniques. Currently, Pacificar’s work is inspired by her trip to the Philippines in 2015. Her paintings are an expression of that change as a powerful the experience of energetic transference from her father’s passing. In the waters of Tinuy-an Falls and the Hinatuan Enchanted River, Pacificar was blessed by the spirits of the land and came into her full destiny as a healer.

Eliseo Art Silva was born in 1972, the same year PH President Ferdinand Marcos declared Martial Law. Silva was an undergraduate at Otis College of Art and Design in Los Angeles (then located in Koreatown), when the 1992 LA Riots erupted. He was 22 yrears old and a junior at Otis when he created his signature work: the Gintong Kasaysayan Filipinotown mural. The Martial Law era in the Philippines, the 1986 Philippine Revolution and the 1992 LA Riots shaped Silva`s art, and by reconciling the history of his lineage with the history of painting, his work directly addresses the visual dehumanization of his culture.