Q&A: CBD Takes on the World of Retail, but Does It Work?

With mainstream retailers Walgreens and CVS offering CBD skin products, it’s easy to believe there must be something special about the trendy ingredient. But the claims are largely unproven, quality control standards don’t exist and the legal status of CBD-infused food is in doubt.

The U.S. Food and Drug Administration plans to hold a public hearing May 31 to gather more information on the science, manufacturing and sale of cannabis compounds such as CBD. A look at what we know as U.S. regulators work out what will and won’t be allowed:

CBD is one of more than 100 compounds found in marijuana. It’s extracted using alcohol or carbon dioxide in factories and then added to oils, mixed into creams and lotions and sold in candies and liquid drops.

Looks like CBD is going mainstream retail. Only makes sense. Get it at your grocery store or CVS/Walgreens?? They are starting with skin care creams. Can oils be far behind? https://t.co/SzZ3qtq6Uh

CBD often comes from a cannabis plant known as hemp, which is defined by the U.S. government as having less than 0.3% THC. That’s important because THC is what causes marijuana’s mind-altering effect.

CBD doesn’t get people high, although it may be calming. Keep in mind some CBD products may contain THC, whether or not the label says so. 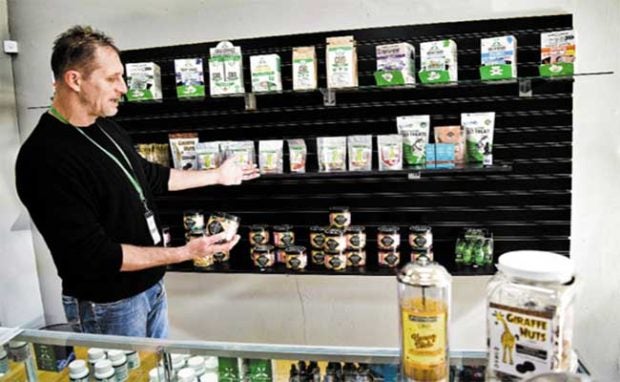 IS IT A MIRACLE CURE?

If you believe the hype, CBD treats pain, relieves anxiety and both helps you sleep and keeps you focused.

Most claims are based on studies in rats, mice or in test tubes. Some human research has been done, but in small numbers of people.

One exception: For two rare seizure disorders, the evidence for CBD was strong enough to convince the FDA to approve GW Pharmaceutical’s drug Epidiolex, which contains a purified form.

The FDA has sent warning letters to companies marketing products with claims for CBD’s effects on cancer, Alzheimer’s disease, fibromyalgia and drug addiction.

Only drugs that have been reviewed by the FDA as safe and effective can make claims that they treat or prevent diseases or medical conditions. Many CBD producers attempt to sidestep the issue by using only vague language about general health and well-being.

Scant research means not much is known about side effects either. In epilepsy research, CBD changed the way the body processed other drugs. That suggests CBD could interact with medications in ways we still don’t know about.

The most common side effects of the CBD drug Epidiolex include sleepiness, decreased appetite, diarrhea, increases in liver enzymes, exhaustion, rash and infections. The potential for liver injury and other risks can be handled with medical supervision, former FDA Commissioner Scott Gottlieb said earlier this month, but less is known about how that would be managed without oversight. And there are questions about overlap if multiple CBD products are used.

The FDA has said CBD is not allowed as an ingredient in food, drinks or dietary supplements. In stating its position, the FDA cited a provision of the law prohibiting food makers from using active drug ingredients or those still undergoing substantial research. But the agency doesn’t have the resources to police all the CBD products that are already available, said Marc Scheineson, a former FDA official.

“They’re not going to pull a thousand products from the market,” he said.

The FDA’s authority is over interstate commerce, and local officials have taken differing approaches. In New York, Los Angeles and elsewhere, officials are warning eateries to stop selling it in food and drinks. Maine passed a law allowing it in foods and other products in the state.

Skin creams and cosmetics may be on safer footing with the FDA, but that too remains uncertain, said Camille Gourdet of RTI International, a nonprofit research institute in Durham, North Carolina. Though cosmetics aren’t subject to premarket approval by the FDA, they could run afoul of regulations if they make specific health claims.

Marijuana itself is illegal under federal law; most states that have legalized it allow marijuana-infused foods and candies, called edibles.

What you buy may contain much less CBD than the label states — or much more. It may include more THC than you want and it may be contaminated with mold or pesticides. Ask to see testing reports.

In 2017 a study in the Journal of the American Medical Association found 70% of CBD products were mislabeled. Researchers used an independent lab to test 84 products from 31 companies.

“You’re really flying by the seat of your pants when you buy this stuff,” said author Marcel Bonn-Miller of University of Pennsylvania.

A product labeled as containing 100 milligrams of CBD may only have 5 milligrams or it may have 200, said Bonn-Miller, now an adviser for a company that sells CBD and other cannabis products. He did not work in the industry when he did the research.

“I wouldn’t trust any of it until I knew independently it was safe,” Bonn-Miller said.

CBD has begun to make its way into research for cancer, autism, diabetic neuropathy, fibromyalgia, chronic pain, alcoholism with PTSD and psychiatric conditions. Results will take years, but some people aren’t waiting.

“They are vulnerable and really hoping to feel better,” said Karen Hande, a nurse practitioner at Vanderbilt-Ingram Cancer Center in Nashville.

She became an expert in CBD because so many of her cancer patients were trying it. She tells them the evidence isn’t enough to back the claims. However,  “they want to believe something is going to work.”