Caregivers in both facilities, private homes must get overtime pay

Caregivers in both facilities, private homes must get overtime pay 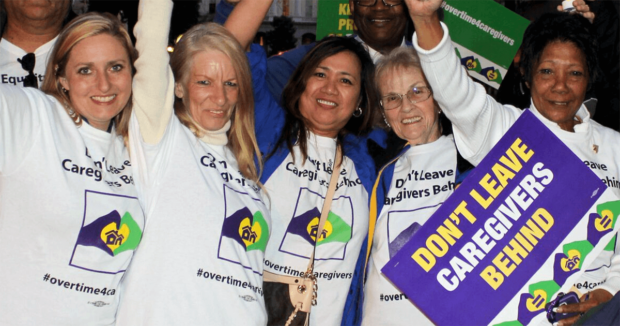 To minimize labor costs, the employer prohibited and discouraged employees from recording their work hours outside of the employee’s scheduled work hours – including compensable hours that could result in the payment of overtime wages. Employees were told that overtime work had to be authorized.

An ABC Senior Care officer explained that in theory, so long as employees worked only for their scheduled shifts, employees would not incur overtime hours under the three-shift schedule. However, this same officer then stated that this theory was “not a great theory” and added that ABC Senior Care saw a lot of overtime incurred often resulting from short staffing caused by high turnover as well as employee absences or last minute callouts. There was evidence that the employer altered the time records to delete these overtime hours.

Due to the lack of staffing, employees were also forced to work during their meal and rest breaks. For the In-Home employees who provided care in private residences, the employer argued that they were not entitled to meal and rest breaks because they were considered Personal Attendants in a private household. However, we argued that ABC Senior Care was not a private household entitled to breaks exemption.

Caregivers and personal attendants are some of the most exploited and underpaid of domestic workers. As one California lawmaker put it, “Domestic workers who care for property such as landscaping or housekeeping are generally entitled to overtime.  Those domestic workers who care for children, the infirm, the elderly, and those with disabilities [are] not.” With the enactment of the Domestic Worker Bill of Rights, personal attendants became entitled to overtime pay of one and one-half times the employee’s regular rate of pay for all hours worked over nine hours in any workday and for all hours worked more than 45 hours in the workweek. Despite this recent changes in the law, the wage violations continue.

All non-exempt employees, including caregivers and personal attendants, whether they work at a facility or in a private household, are entitled to be paid for all of their work hours. They must be paid overtime rates of time and a half for work in excess of 8 hours per day and 40 hours per week. This is true even if the employee is an undocumented immigrant.