Cooler Talk: Yeti vs. RTIC- Does RTIC match the quality of Yeti?

Yeti vs. RTIC: Does RTIC match the quality of Yeti?

Do you have plans for the weekend, perhaps a camping trip or a beach vacation? That sounds like fun! You have to do a lot of stuff to prepare though, such as storing hot food in plastic containers and bringing a few cans of cold beer. Of course, you have to check the location and equipment too. Those are just a few of the super important considerations you have to check for your camping or beach trip.

This article will come in handy if you are looking for the best cooler brand out there with a lifetime warranty. Yeti, the bear-resistant coolers which have been there for the long run, or the newbie, coolers like Yeti but cheaper, RTIC coolers are up for a one-on-one comparison. Read and find out which one of the coolers is the best for your lifestyle and outdoor needs.

Coolers are a necessity for all outdoor activities because you have to keep your food hot and your cans of soda and beer cool. Many people know how amazing that icy cold sip from cans of beer is at the end of a long camping trip. While many brands are competing out there, we have two that stand out: Yeti vs. RTIC. And given that RTIC is a much newer brand than Yeti, we’ll find out if RTIC makes soft and hard coolers comparable to Yeti.

This will be an in-depth comparison between the two top cooler brands in the industry, RTIC vs Yeti. Continue reading to determine which of these decent coolers can meet your outdoor or food transportation needs.

Let’s get into it!

As an established brand since 2006, originated in Austin, Texas. Outdoor enthusiasts are the largest market of Yeti like I have mentioned above, who are looking for the top quality cooler that is both tough enough for the environment and of course, provides the longest cooling duration and ice retention.

Yeti coolers come in a variety of shapes and sizes and even have ones with soft or hard walls. In the growing business scene, Yeti is one of the brands that has also products like ice buckets, tumbler options, and other related equipment 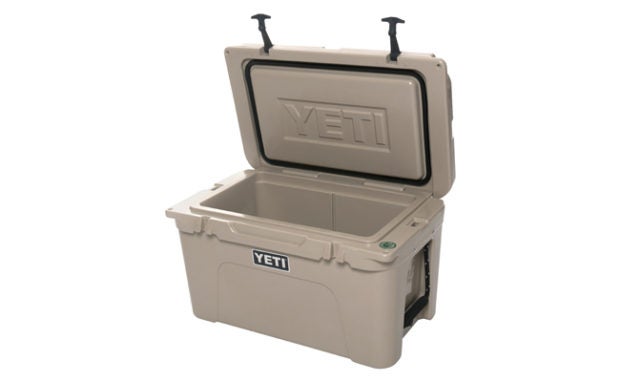 Yeti’s hard-sided coolers come in two models: the Roadie Series and Tundra Series. The Yeti Roadie Series, as the name implies, are perfect coolers for road trips or smaller trips, as they are more compact and prioritize storage size over ice life. 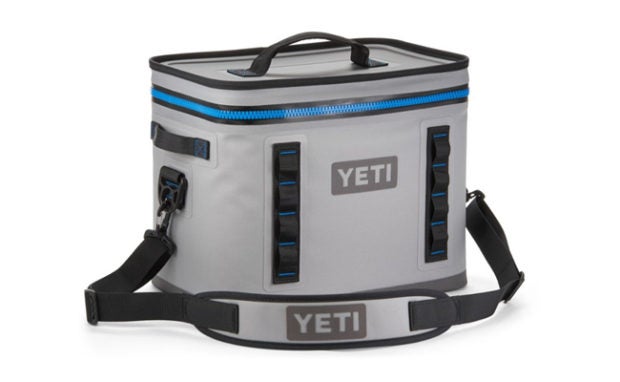 The soft-sided cooler for Yeti is called Hopper, which has two categories: the Hopper Flip and the Hopper Two, and they look like duffel bags. Hopper Flip, as the name implies, is a smaller soft cooler compared to the Two which has a flip-open top like a typical lunch box.

The Hopper Two is the larger Yeti cooler, more resilient, and even has a zip-open entry lid. Hoppers are more compact, light, and convenient than the usual hard-sided coolers due to their hard-plastic exterior. In addition to the Yeti soft coolers is the Hopper Backflip 24, which is designed to carry more ice and drinks ranging from 25 pounds and 20 cans respectively. 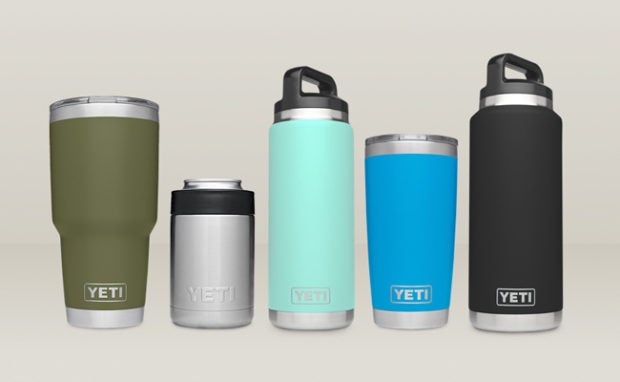 As the brand expanded more on its products, Yeti has also created specialized drinkware that is like a portable tumbler for your hot or cold drinks alike. Each one has a quality lid that provides waterproof insulation. This keeps your drinks hot or cold and prevents them from spilling.

They all have quality lids that keep They range from 10 oz. Lowball, 18oz Bottle, 20oz Tumbler, and 30oz Tumbler, up to a one-gallon jug.

The RTIC cooler brand came out in 2014 and has always been considered one of the best Yeti alternatives due to its similar feature-by-feature basis. However, one thing that RTIC promotes is their cheaper price point. The reason is that they can keep the price point down from covering traditional cooler distribution channels, which include lots of middlemen. This drives up the price of the product, causing it to be more expensive. 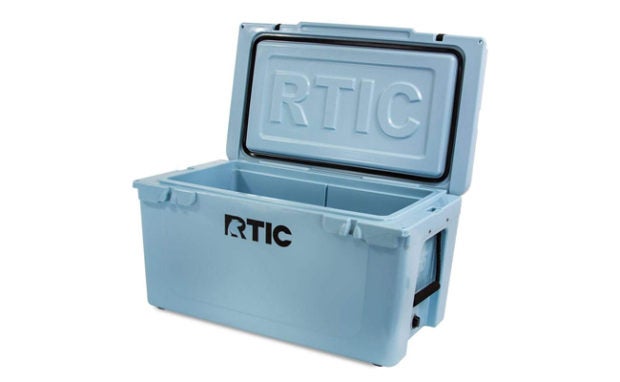 Also called Roto-molded coolers, they have come in five sizes ranging from the portable 20, RTIC 45, RTIC 65, RTIC 110, and RTIC 145. There’s nothing much to say as the features of these hard coolers are similar or almost the same as with Yeti. All RTIC coolers come with rope handles and a stainless steel bottle opener. 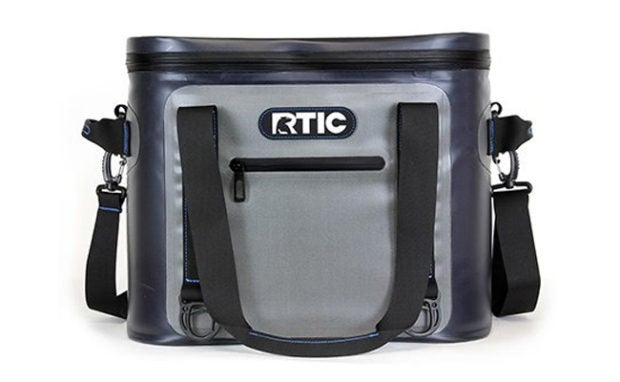 Also called as SoftPak coolers, these RTIC coolers also come in different sizes and directly compete with Yeti’s Hopper. They also have a compact lunch box meant for shorter trips. Another release is the SidePack and Small SidePack which are portable soft coolers that are intended to hold small items and keep them waterproof. 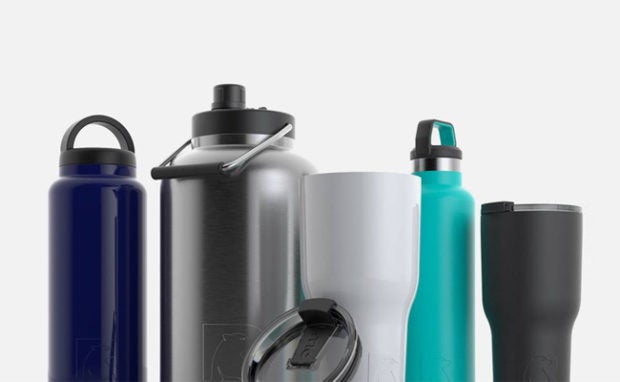 We compared RTIC and Yeti coolers of the same size to fairly compare their ice life. 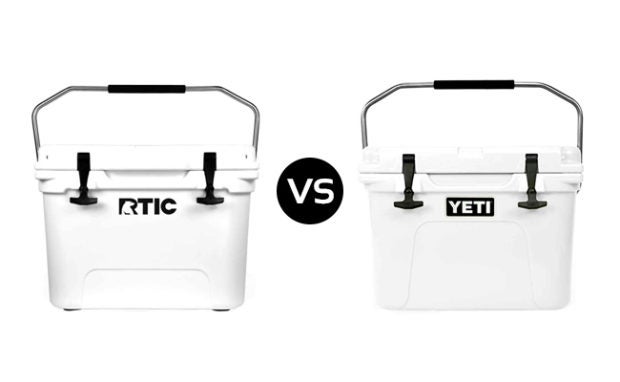 As expected, both Yeti and RTIC coolers will have lower ice life than others due to their small size. However, in RTIC 20’s case, it allowed 5 more pounds than with the other cooler brand. Hence, upon testing it, both RTIC and Yeti coolers have lasted for 4 days while the lid keeps the temperature constant. For this quality, it’s a tie for RTIC 20 and Yeti Roadie 20. 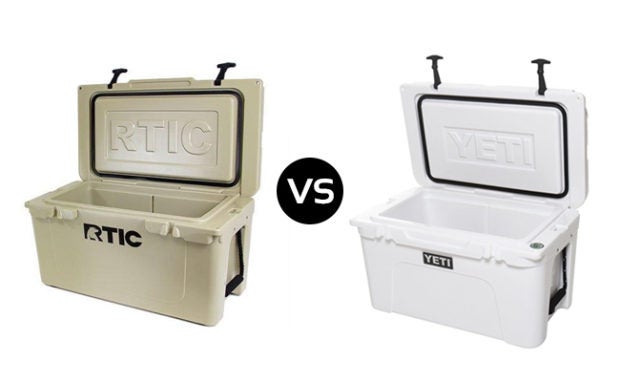 The Yeti Tundra cooler has larger storage which allows for more ice, which makes it last for about 5 days, while RTIC 45 allows 5 pounds more ice life. This means these hard coolers have ice retention of higher quality than Yeti, so it lasted about 5 and a half to 6 days. This one goes for RTIC 45. 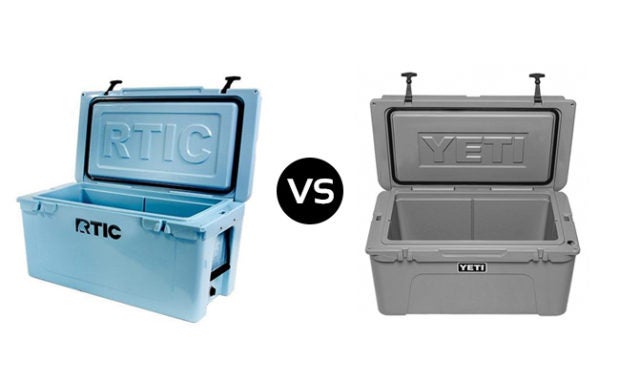 Tundra 65 can carry up to 56 pounds of ice and can last for 7 days. The RTIC 65, which is a bit larger than the Yeti Tundra cooler, holds 13 pounds more of ice. It can last up to 8 and a half days. This goes to the RTIC 65 cooler.

Keep in mind though that with the limited size range from RTIC coolers, the larger Yeti coolers couldn’t be put to test.

However, RTIC beats the Yeti coolers on the ice life quality. 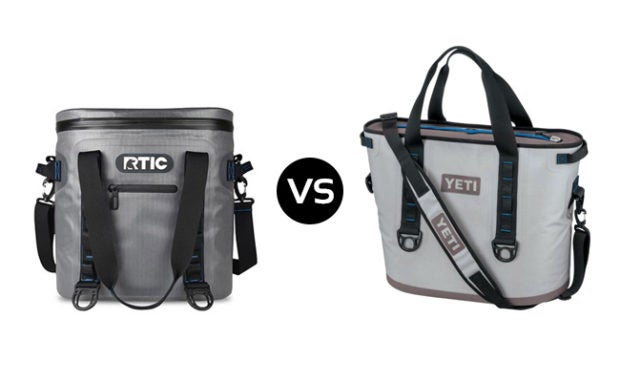 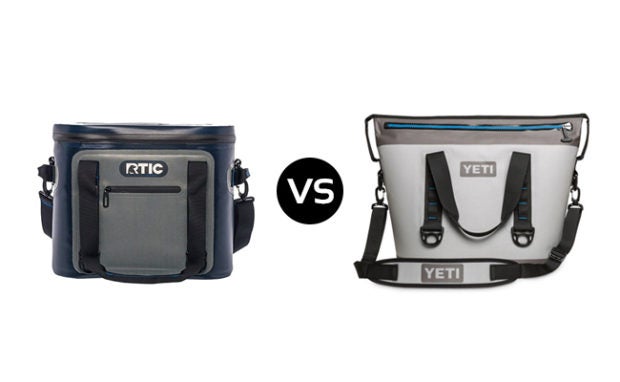 The mid-range cooler can carry around an extra 10 pounds of ice compared to its Hopper 20 and RTIC cooler and has the same ice retention quality which is about 3 and a half to 4 days. 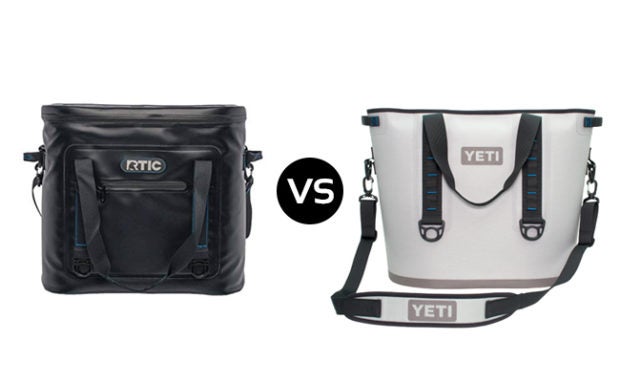 The largest cooler for Yeti, Hopper 40 can hold 40 pounds of ice and can last up to 4 days. While RTIC SoftPak can hold more than Yeti’s by four more but has the same number of days as Yeti’s ice life.

Travel Tips: Things to Do on Your Vacation in Palawan El Nido

How CBD Works for Treating Your Stress or Anxiety 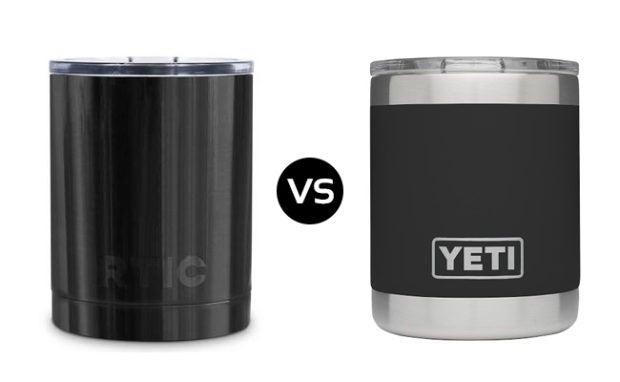 Yeti is made of 18/8 stainless steel with double-wall vacuum insulation and has a unique no-sweat design. Because of this, your drink cans could last much longer, and it takes 30 minutes before temperature changes occur. The RTIC cooler has just about the same features as Yeti, so the results were the same. One thing about RTIC is that it comes with a lid, which you might find more convenient.

RTIC Can vs. Yeti Colster 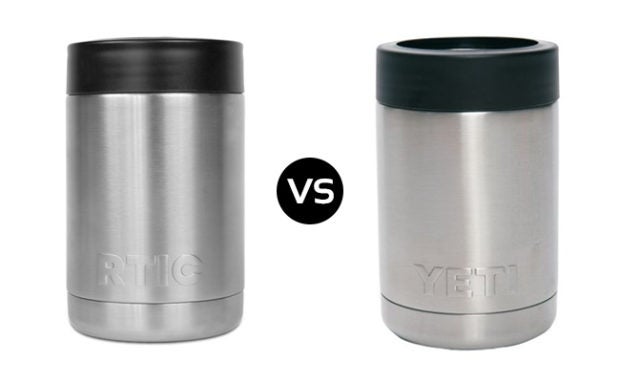 Yeti’s cooler has a tight-fitting lid and thick stainless-steel construction, which could last for about an hour before temperature changes occur. Given the same features for RTIC Can, it can also last for an hour. 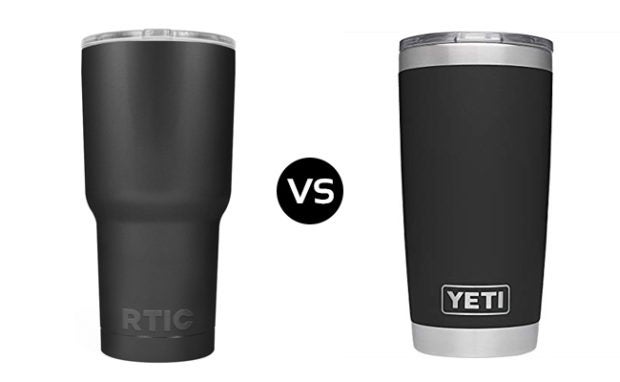 Again, with the same components and features as the other drinkware, both RTIC’s drink cooler and the Yeti Rambler can last for about 24 hours. 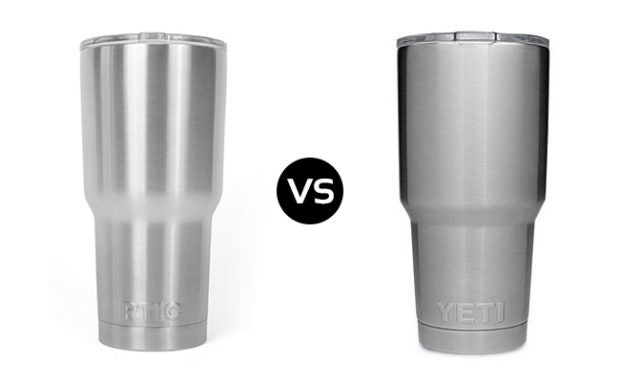 With the tests of the natural and demanding environment, both brands have been tested out for their durability. Challenged with occasional drops or bumps with other hard solid materials, the Yeti can resist the test of these impacts.

Yeti, being the more experienced company is, of course, offering coolers with better quality. It can handle just about anything that the environment throws at it. While RTIC, as they tend to be like Yeti’s, of course, has tough hard coolers as well.

For the soft-sided cooler characteristics such as premium hardware, puncture-resistant outer shell, anti-microbial liner, high-quality stitching, and 2″ of closed-cell foam on the lead, RTIC and yeti both have it. And for the drinkware, both RTIC and Yeti have stainless steel construction, double-wall vacuum insulation, single-piece design, no sweat retention, and an easy secret base.

Upon having the same level and amount of toughness, it is clear how RTIC had a good grasp of copying Yeti’s features.

Yeti, as mentioned in the first parts of this article, has an extensive size range to choose from, especially in their hard-sided cooler line. What makes RTIC special here is that, despite copying the sizes from Yeti (all though not all), they’re still able to make it more spacious, making it fit more cans and other products inside than Yeti.

Well, we couldn’t deny that outer appearance can affect our purchasing choice. Yeti’s core design is more than adequate, as it has a wide range of color choices and even some patterns for its other products. They also have special services wherein you can have customized logos. While RTIC’s color choices and customizations are quite limited. But then without being said is of course because the company is relatively new compared to Yeti’s.

In terms of reputation or popularity, it would still go to Yeti. Not only because it has a long history than RTIC but also because RTIC only relies on word of mouth mostly for its advertising wherein Yeti has already made its mark on that industry.

Of course, for a premium cooler that is built with perfect features and long-lasting ice life, the price can be quite a huge sign. RTIC gets the advantage here as their prices are much cheaper than Yeti.

There are many copycat coolers out there such as grizzly coolers, Engel coolers, pelican coolers, elite cooler, orca cooler, and canyon coolers. At the end of the day, it does come down to RTIC vs Yeti cooler as your go-to cooler.

With all the factors compared and said, it is now up to you to decide which one to purchase: Yeti or RTIC? But based on the findings of the tests and comparisons made it seems like RTIC is as good as Yeti, only cheaper.

Which one’s better between RTIC vs. Yeti? It depends on your needs. If you take frequent trips outdoors, you might want to stick with Yeti. After all, this is a cooler brand that has satisfied customers over the years.

We can say that Yeti is your best bet for high-quality cooling needs. On the other hand, you might want to choose RTIC coolers if you just need ice retention and storage for yearly events, such as a summer vacation.

You won’t wear it down as quickly, so you might be able to keep using it for several years. No matter your choice, make sure you clean your cooler after every use. Remove remaining liquid by taking off the drain plug, washing the cooler, then drying it off.