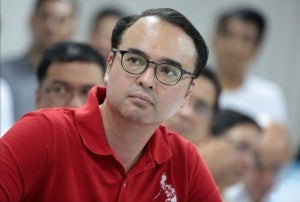 Sen. Alan Peter Cayetano was a US citizen; is he now a Philippine citizen? INQUIRER FILE

The names of singer Tina Turner, actor Jet Li and Philippine Senator Alan Peter Cayetano are all included in the Wikipedia List of distinguished former United States citizens who relinquished their nationality and whose relinquishment is memorialized in the official “Federal Register” of former US citizens.

As a child of a Philippine citizen father and a US citizen mother, Alan Peter was born as a citizen of both countries but, by the age of 21, he had to choose one or the other, and he chose US citizenship.

According to the complaint filed by former Pateros Mayor Jose Capco, Jr, Cayetano’s parents obtained an Alien Certificate of Registration (ACR) for him on March 18, 1976, indicating that he was an American citizen.
Capco obtained a further record, which revealed that on January 23, 1985 Cayetano personally applied for and was granted a new ACR, where Cayetano affirmed his intention to be a citizen of the United States of America.

According to Capco, when Cayetano campaigned for municipal councilor of Taguig in the 1992 elections, he produced an Identification Certificate, BC-1295, from the Philippine Bureau of Immigration that he was a Philippine citizen. But Capco said this identification certificate was apparently bogus and “has never been affirmed by the secretary of justice” as required by the law.

Capco’s complaint never made it to the Philippine Supreme Court, and it is unclear as to what ever became of his accusation. But Cayetano has also never challenged his inclusion in the US Federal Register as having only formally relinquished his US citizenship in 1999.

What this means is that Cayetano was apparently still a US citizen when he first ran and won as Taguig councilor in 1992, as vice mayor in 1995, and as congressman in 1998 before he formally relinquished his US citizenship in 1999.

Interestingly, the other former notable US citizen on the Wikipedia List is Grace Poe Llamanzares, whom the List reported as having renounced her US citizenship prior to becoming chairwoman of the Movie and Television Review and Classification Board in 2010. She was later elected to the Senate of the Philippines in 2013.

But when Poe renounced her US citizenship in 2010, the Philippine Dual Citizenship Act had already been in effect since September 17, 2003 when President Gloria Macapagal-Arroyo signed it into law. Former natural-born Filipinos who lost their Philippine citizenships when they became naturalized citizens of other countries are deemed not to have lost their citizenship under the conditions provided by the act. 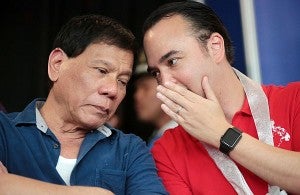 After Cayetano formally gave up his US citizenship in 1999, what citizenship did he acquire? Did he become stateless?

On March 11, 2017, the Philippine Department of Foreign Affairs announced that it had put on hold the application of former Foreign Secretary Perfecto Yasay Jr. for renewal of his Philippine passport pending resolution of questions surrounding his citizenship by “competent authorities.”

Yasay was terminated from his post as Philippine Secretary of Foreign Affairs when the Commission on Appointments of the Philippine Congress voted 15-0 to reject his confirmation because he had lied about when he formally relinquished his U.S. citizenship.

It was learned at the hearing that Yasay formally swore an oath of allegiance to the United States in November of 1986 when he became a naturalized US citizen. He then officially renounced his American citizenship at the US Embassy in Manila on June 26, 2016 before he was officially appointed by Duterte as Secretary of Foreign Affairs. Yasay had insisted that he was never a US citizen because he had a “preconceived intent” of abandoning his US residency when he became American.

Since Yasay has never formally applied to reacquire his Philippine citizenship, the issue of his citizenship is now left for “competent authorities” to decide, the DFA announced.

The same rule should also apply to Sen. Alan Peter Cayetano who has been all but formally appointed by Pres. Duterte to serve as his next Secretary of Foreign Affairs on May 10, 2017 when the one-year election ban on candidates being appointed to executive positions expires.

It appears that Duterte is set to appoint as his secretary of foreign affairs another former US citizen who may or may not be a Philippine citizen.

The supreme irony here is that Pres. Rodrigo Duterte announced his intention to finally run for president on November 21, 2015 after the Philippine Senate Electoral Tribunal (SET) voted 6-5 to allow Sen. Grace Poe to run for president.

Duterte said at the time that Poe, being a foundling, was not a natural-born citizen and was therefore not qualified to seek the highest post in the land.

The decision of the tribunal, Duterte said, “cheapens the Constitution, the only thing that holds the country together.” That SET decision, he said, was the final straw that pushed him to run for president.

The irony within this irony is that the deciding vote for Poe was cast by Sen. Pia Schramm Cayetano, Alan Peter’s sister, who voted on the issue of whether a foundling is a Philippine citizen because she herself adopted a foundling, Lucas, in 2011. 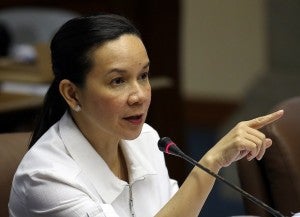 Sen. Grace Poe was formerly a US citizen. INQUIRER FILE

So, Mr. President, what does the Philippine Constitution and the law say about you appointing another non-Philippine citizen as your next Secretary of Foreign Affairs?

(The author is a natural-born Filipino who became a US citizen in 1981 and who then reacquired his Philippine citizenship in 2003 to become a Dual Citizen. Send comments to [email protected] or mail them to the Law Offices of Rodel Rodis at 2429 Ocean Avenue, San Francisco, CA 94127 or call 415.334.7800).