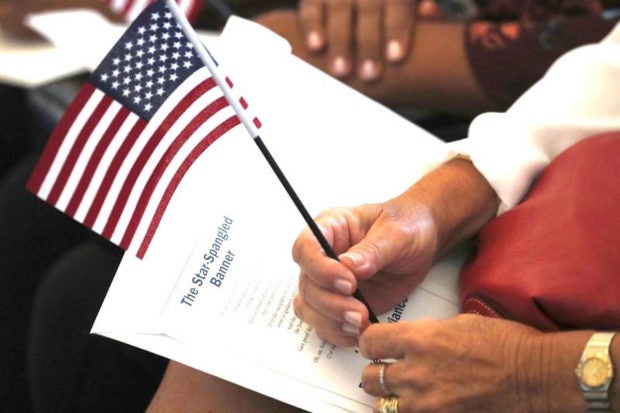 A candidate for citizenship holds an American flag and the words to The Star-Spangled Banner before the start of a naturalization ceremony at the U.S. Citizenship and Immigration Services Miami field office in Miami. USCIS wants to raise application fees. AP PHOTO

Applying for U.S. citizenship is going to cost nearly double the current fee.

The United States Citizenship and Immigration Services (USCIS) announced that it will raise the naturalization application fee to $1,170. This is an increase of 83% over the current fee of $640.

The cost of applying for naturalization is already a barrier for many aspiring U.S. citizens.

USCIS also announced it will abolish available fee waivers for naturalization. Critics say that with these changes, USCIS has made clear its intent to reserve U.S. citizenship for only the wealthiest immigrants.

“At a time where 40 percent of Americans cannot cover a $400 emergency expense, it’s not a stretch to see how this announced fee increase adds a greater financial burden to applicants and puts citizenship even further out of reach,” John C. Yang, president and executive director of Advancing Justice | AAJC.

The organization and other immigrant rights advocacy groups oppose the fee increase and the elimination of naturalization-related fee waivers.

They urge eligible immigrants to to naturalize before these new measures take effect.

In a complaint filed in U.S. District Court by a coalition of communities and immigrant aid organizations seeks to delay the implementation of the proposed rule.

If the court agrees, Cuccinelli’s actions since taking over the agency in June would be invalidated, including a new rule on application fee waivers for naturalization and other benefits.

The plaintiffs have also asked for an injunction to prevent the implementation of the new waiver guidelines.

The City of Seattle and several immigrant services agencies, including Catholic Legal Immigration Network, and Immigrant Legal Resource Center, are named as plaintiffs in the complaint challenging the new rule and Cuccinelli’s appointment.

“The American promise must be open to all,” Seattle Mayor Jenny Durkan said in a press release. “Wealth is not and should never be a requirement of being an American citizen. Seattle will fight for the promise of America and against a pay-to-play approach to citizenship.”