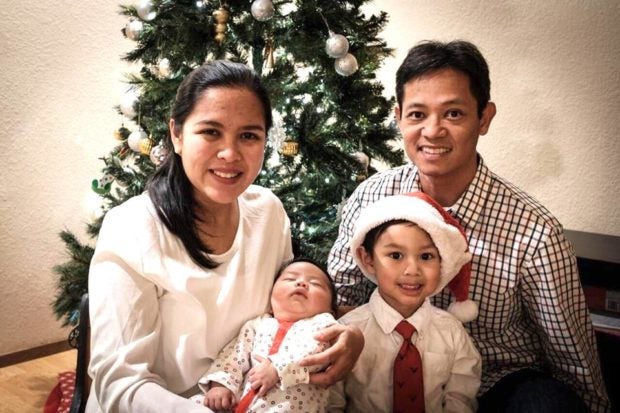 Pancit, queso de bola, jamon, bibingka, lechon, puto bumbong and a lot of Filipino dishes are spread on the table, while some people are belting out songs in the karaoke.  After the Midnight Mass, the family members gather to partake of the Noche Buena and later the annual family Bingo.No, it’s not in the Philippines. It’s a Filipino American household in the San Francisco Bay Area.

Despite having over 60 family members in the U.S., Emmanuel Maceda, 42, a library science graduate from the University of the Philippines, misses Paskong Pinoy, his two older siblings, the UP lantern Parade, the UP Mountaineers’ Elvis concert and close friends and relatives.

Prior to immigrating, Maceda also worked at Accenture, a business process outsourcing (BPO) company. When his supervisor learned that he was a green card holder, he was transferred to the Accenture office in San Francisco. Presently, Maceda is SharePoint administrator.

Now raising his own family, Maceda and his wife, Marge, want their kids, Maktan, 3, and Kubo, 2 months, not only to celebrate “American Paskong Pinoy,” but also to love their heritage and the Filipino language.

“Mastery of the Filipino language is of primary importance to me. Learning and mastering it  would mean he does not lose his true heritage. Since my son started going to school, he is constantly bombarded with the English language, it’s a battle but hopefully not a struggle between us. I only talk to him in Tagalog. English is not my first language, or my wife’s so it is important to us to be able to communicate with our children the best way we can based on our culture and how we were raised,” Emman explains.

Emman says that it is important for the immigrants to teach their children their mother tongues. He mentions the Latinos whose first language is Spanish. Among the Filipinos, he expresses his admiration for Ilocanos who still speak Ilocano among themselves.

As a melting pot of different peoples from different nations is what makes America unique.

“Language is probably the greatest manifestation of culture, of heritage. If I cannot impart that to my children, what heritage will they be talking about when they grow up? It will be a white man’s heritage,” Emman explains.

When Maktan started pre-school in August, Emman and Marge decided to enroll him in a parochial school where there is a strong Filipino community presence. He also emphasizes the importance of instilling respect to diversity and cultures among children. 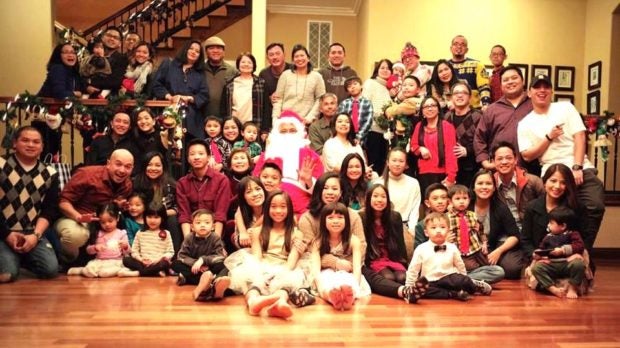 The Arcenal-Maceda clan in the San Francisco Bay Area. CONTRIBUTED

“Let them play with other children of different ethnicity, especially with people of color.,” Emman says.

Emman was shocked when he first heard kids calling their parents on first-name basis that he taught Maktan to call them Tatay and Nanay.

At the BPO industry in the Philippines, the call center agents are usually trained to mimic the American accent. Emman, however, does not care about the accent. Living in the U.S. for years made him notice different accents when people speak.

“I feel proud when I am told I have a Filipino accent when I speak in English. So what? It’s not my first language. What is important to me is grammar and the correct pronunciation,” Emman laughs.

Although Maktan speaks English with an ‘accent’, Emman and Marge speak to him in Tagalog. Often, Emman admits that he feels that it is a losing battle, he takes inspiration from the migrants from Latin America whose culture is very much alive, not only on food, but also in language.

Like millions of Filipinos, migration has been a part of Emman’s family, especially on his maternal side. In 1970, his uncle emigrated to the U.S., eventually petitioning the siblings and their parents. His mother was petitioned in 1975, but only got her green card in 1997. While waiting for the green card, she worked briefly in Taiwan.

“Chain migration” refers to the process of family reunification in which a U.S. citizen petitions for qualified members of his/her family.

Despite the lure of the American Dream, Emman’s father refused to leave the Philippines and died in 2012. His two older siblings are still in the Philippines, while he and two others are in the U.S.

Emman says that the main requirement for immigrating to the U.S. is patience. He put off marrying his girlfriend to be able to qualify for the petition as an unmarried offspring. His petition was granted after 11 years.

“When my wife, Marge, and I married here in the U.S. in 2010, she had to go back to the Philippines immediately since she had to wait out my petition for her. It took 2.5 years before her permanent resident status was given. She could have waited here in the U.S. but since I was only a permanent resident myself then and not a U.S. citizen, she couldn’t wait it out here. It was the last ‘sacrifice’ we had to make,” Emman explains.

In 2015Emman became a citizen. He currently has dual citizenship, while Marge is already eligible for naturalization. A permanent resident can apply for citizenship after five years of continuous residence.

Like many immigrants who pledge allegiance to their adopted countris, immigrants like Emman are often seen as unfaithful to their original nation. Yet, Overseas Filipino Workers (OFW) both documented and undocumented are seen as heroes for the sacrifices and the remittances that they send back home.

“Take comfort that our ancestors are trailblazers and intrepid explorers themselves who managed to survive the voyage to islands thousands of miles away. We, by nature are explorers. We are now in almost every corner of the world. Indeed, technology has made the world a smaller place,” Emman says.

His message to the Filipinos in the diaspora is also for his two sons:

“Do not shun the culture of your homeland; our values are what make you uniquely Filipino in a positive way. Even if you do not live in the Motherland anymore, try to find ways to contribute and help the Filipino and the Philippines.”

The Maceda family hopes that one day, they will celebrate Paskong Pinoy in a place where the people greet each other Meri Krismas and Hapi New Year and Maligayang Pasko at Manigong Bagong Taon.