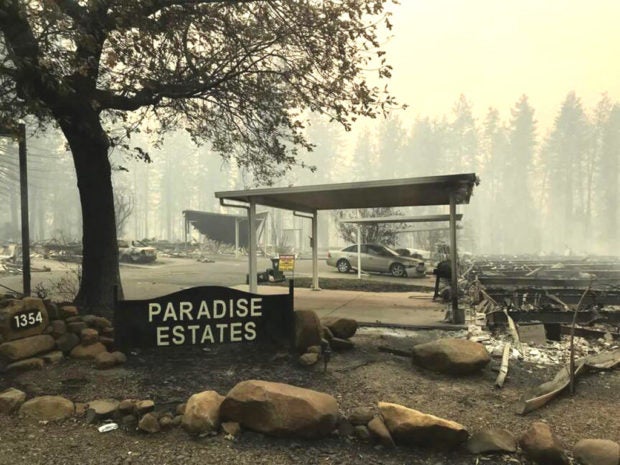 LOS ANGELES — With winds reaching up to 50 mph, the Camp Fire, which started in early November, blazed through over 153,000 acres and nearly 14,000 residences in Northern California.

Aside from becoming the most destructive fire in the state’s modern history, it also proved to be the deadliest with a death toll of 86.  Roughly 27,000 people were displaced.

Nearly all of the small town of Paradise, California, was consumed.  As residents come back to assess the damage, many remain undecided on whether to rebuild or to move out for good.  This is true also for its close-knit Filipino-American community.

Gemma Clow, who previously shared with the Asian Journal her family’s experience evacuating from the fire, said that most members of the Paradise Fil-Am community remain displaced and have resorted to staying in trailers, hotels, apartments, and with friends in nearby cities like Chico, Oroville, and Yuba City.

“Some have already bought a house outside of Paradise,” Clow told the Asian Journal, adding that one of her friends is still currently living in a hotel.

A resident of neighboring Magalia, which was also heavily affected, Clow also had to experience living between hotels.

“It is not fun at all,” she said.  “Our lives have forever changed and will never be the same again.”

Of the approximately 30 Fil-Am families in the Paradise and Magalia area, only seven families had their home spared.  But while some houses remained standing, major tasks like smoke damage cleaning and removal of ashes and debris prevent many from coming home.

Clow added that there are still many people without electricity in Paradise.

“In my opinion, it will take at least six months to a year before you can rebuild,” said Clow.

In addition to the challenges of finding places to stay, many also have been facing unemployment as a majority of businesses remain closed.

Clow said gas stations and businesses have opened up in Magalia, but none have yet opened in Paradise, with the exception of a SaveMart and a Holiday Market.

Feather River Hospital, the city’s only hospital — also the largest employer in the city — was badly damaged and among those forced to close. It may not reopen until 2020.

All but three families of the Paradise Filipino-American community remain displaced by the Camp Fire as homes remain completely destroyed. GEMMA CLOW

Of the over 1,000 full-time and part-time employees, many including Clow, found themselves jobless as a result of the fire.  Many in the Fil-Am community worked as pharmacy technicians and nurses.

Clow said that they would be receiving their last salary from Feather River Hospital on February 5, 2019.

Late last month, a spokesperson for the Feather River Hospital said that it hoped to place all of its associates in jobs within its Adventist Health network.

Clow was offered a job as a Senior Analyst at the Adventist Health corporate headquarters in Roseville, roughly 80 miles away from Paradise.

“Our hope and intent is to place all of those associates who are willing to relocate somewhere within Adventist Health, and to work with those who cannot relocate to find connections locally with other organizations,” it said in a statement.  “When the time is right and as services return, we encourage those who wish to return to the community to come back.”

In its statement, Adventist Health informed employees that it would still be “at least a year more more before many services are restored, and longer before they reach their former scale.”

“Paradise and Magalia will never be the same again.  Just passing through the town is quite depressing. The devastation after the Camp Fire is unimaginable.  I know the entire town is still mourning,” said Clow. “To lose everything you have worked for in your entire life is the worst thing that can happen to a person. To leave a town where your kids grew up is hard.”

But despite the challenges, many of the community members have focused on getting life back to normal as much as possible, which includes making sure their kids remain in school in any way they can.

Though her son’s school remained standing, instruction has temporarily moved to Chico near the airport — about a 45-minute to an hour drive from their home in Magalia, she said.

She said some of her friends have moved their kids to different schools, while others are doing home and online schooling.

Maintaining hope throughout the holidays, Clow said the community has still been keeping in touch.

While their annual Christmas party tradition of about 28 years was initially canceled due to the fire, she said they did have a smaller get together on Sunday, December 8, though not all were able to attend.

“Though we are scattered everywhere, we keep in touch through Facebook,” said Clow.  “We will be a community again. We will take it one day at a time.”