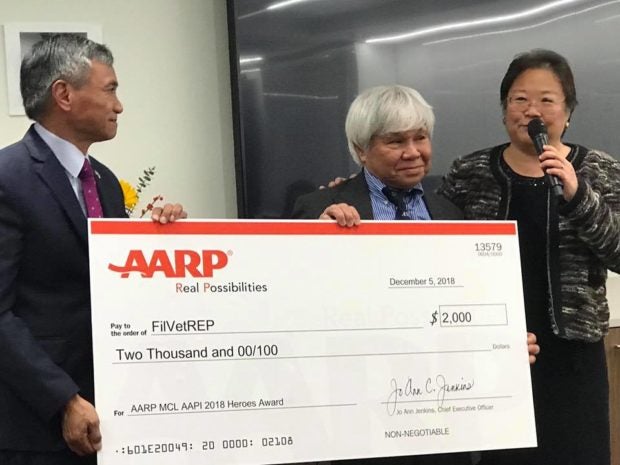 NEW YORK — Jonathan Melegrito has spent over two decades campaigning for equity and justice for the 260,000 Filipinos who fought for Americans in World War II,more than half of whom have died with no recognition from the U.S. government, and many of the ones who are alive still have no pensions and benefits.

For his dedication Melegrito, a longtime activist (and an INQUIRER.net correspondent) was feted last week by the AARP with 2018 Asian American & Pacific Islander (AAPI) Hero Award, joining a prestigious list of everyday unsung heroes — community leaders, volunteers and staff of nonprofit organizations — for their commitment to serve AAPI seniors nationwide.

“I’m very proud and honored. I’m humbled and inspired by the sacrifices of our Filipino veterans during the second world war,” said the 74-year-old resident of Kensington, Maryland, who received the award on Dec. 5 for his commitment and volunteer work with the Filipino Veterans Recognition and Education Project (FilVetREP), in Washington, D.C.

Melegrito and the FilVetREP received $1,000 each, but he donated his cash award to FilVetREP.  AARP has produced a documentary filmabout him and his work on the issues of Filipino veterans.

Through the programs of FilVetREP, Melegrito was among the Filipino-American advocates who spent their time and resources for years, lobbying high-ranking officials and members of U.S. Congress to grant Filipino World War II veterans their due recognition, benefits and the Congressional Gold Medal, the highest civilian honor bestowed by Congress.

Family and friends of Jon Melegrito and community advocates and supporters of FilVetREP pose for a group photo. REY BANGIT

After nearly two years, the Filipino Veterans of World War II Congressional Medal Act, which was introduced by Sen. Mazie K. Hirono (D-Hawaii) and Rep. Tulsi Gabbard (D-Hawaii), was passed and then signed into law by Pres. Barack Obama in December 2016.

And on Oct. 25, 2017, Speaker of the House Rep. Paul Ryan honored and conferred the Congressional Gold Medal to the Filipino veterans in a ceremony, coinciding with the observance of the Filipino American History Month.

“This special [hero] award is not about me; it is more about remembering those who have given their time and dedication to this important work,” Melegrito said. “There’s a lot of people who are involved here to achieve our goals for our veterans. It’s really not about the money — it is about respect and dignity.”

He was nominated for the AARP hero award by Retired Maj. General Antonio Taguba, a decorated Filipino-American U.S. military officer who is known for authoring an internal U.S. Army report on abuse of detainees held at the Abu Ghraib prison in Iraq.

Devotion to activism and social justice

Melegrito, a son of a World War II Filipino veteran, has devoted nearly all his life to activism and social justice work.

In 1965, at 20 years old, he immigrated from the province of Nueva Ecija, Philippines, to Columbia, Missouri, to finish his undergraduate degree. When he moved to Washington, D.C. in 1968, shortly after the assassination of Martin Luther King, Jr., he says the travesty moved him to be more politically involved, joining the anti-racism and anti-apartheid movements for the rights of immigrants and people of color. He also became an anti-Marcos dictatorship activist and a local leader of the Union of Democratic Filipinos (KDP).

“I eventually joined the equity and justice movement for Filipino World War II veterans,” he said. “I saw how 260,000 Filipino soldiers, who fought side by side with Americans and won the war against the Japanese, denied recognition by the U.S. government for more than 70 years and deprived of their rights and benefits as soldiers.”

His inspiration, according to Melegrito, comes from his father.

“I always think of him and his sacrifices. When the Congressional Gold Medals were given to Filipino veterans, I thought of him and I cried.”

His wife, Elvie, and their daughter, who is a teacher in Princeton, New Jersey, are also active in the Filipino-American community.

Digital platform at the Smithsonian Museum

Melegrito said he would use his AARP hero award as leverage to “raise awareness and advance the issues of Filipino veterans” in the United States.

“Many Americans don’t even know that Filipinos fought for the Americans during the war,” he added. “Many of them don’t know the critical role Filipino soldiers played to win the war.” 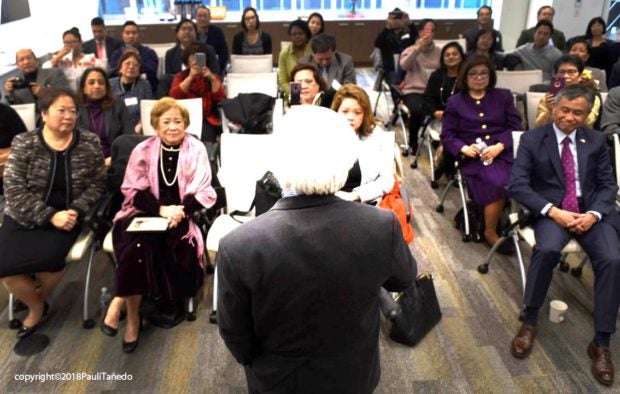 Jon Melegrito thanks the many supporters and volunteers who attended the Awards ceremony on Dec. 5. PAUL I. TANEDO

He and other advocates in the movement are currently raising a minimum of $1 million — mainly donations from the Filipino-American community and American supporters — to establish a digital platform in one of the museums in Washington, D.C. and memorialize the contributions of Filipino veterans in World War II.

“We are hoping to assemble diaries, photos from the archives and oral history from Filipino World War II veterans who are still alive. It would be wonderful to see and hear the stories of our veterans at the Smithsonian Museum,” Melegrito said.

While they are still in conversations with museums, he hopes to finish and finalize the digital project within two years.

“Millions of people visit the Smithsonian Museum, so the digital platform would gain a much wider reach and provide information for people to learn more about Filipino veterans,” Melegrito said. “I consider myself very fortunate because we are doing this work together as a community.”