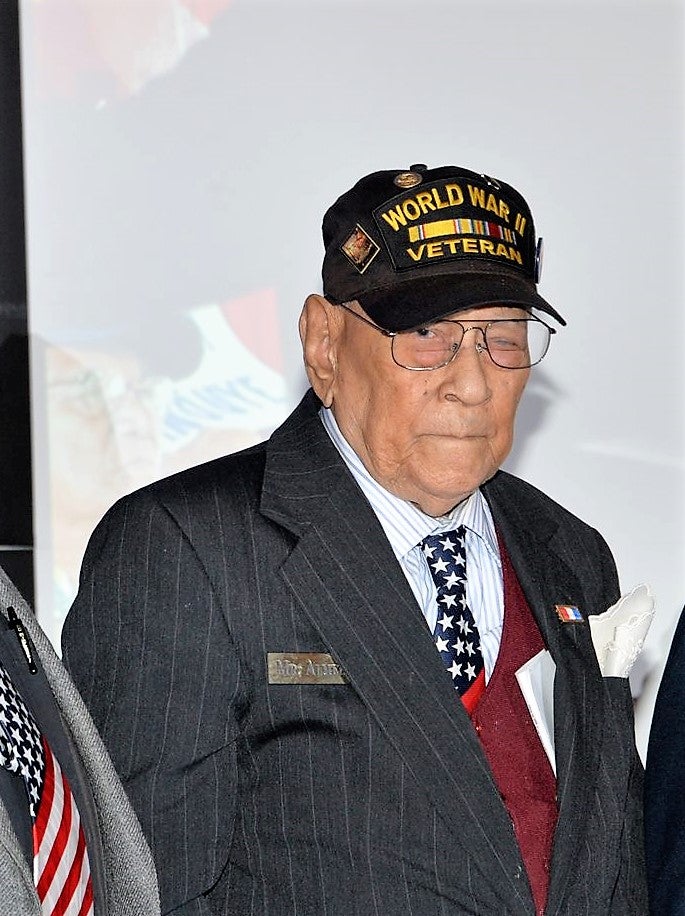 ARLINGTON, Virginia — There was a brief silence before Celestino Almeda could finally speak. Then his voice cracked as he recalled the haunting sights, sounds and smells of World War II.

As he turned 100 years old about six months ago, Almeda still struggled for words to describe the horrifying days he fought as a combat guerilla fighter in the Philippines.

“On December 8, 1941, the Japanese bombed Manila,“ he said. “When the war broke out, I was a teacher at Arellano High School. But the city was in total chaos, and eventually I joined the guerilla unit.”

Along with American troops, he said that he fought hard against the Japanese. He recalled how the battle never ceased — from daybreak until midnight when everything around them was in complete silence.

“Once I saw five dead bodies piled on top of each other,” he said. “Their bloody arms and limbs were hanging off a casket.”

On another day, he said that he saw a man on the street who looked like he was resting on the curb, only to find out that the man’s body was torn apart and that he had been dead for days.

“Who could forget those grim images of the atrocities of war?” he said. “They are and will always be with me.”

Almeda is the oldest-living Filipino veteran in the United States.

Now, more than 70 years had passed after the war, Almeda continues to fight another longtime battle of his life: recognition from the U.S. government for his military service.

He says that he had written the U.S. Department of Veterans Affairs a number of times since early 2000, requesting to recognize his military service during World War II.

But all his requests had been denied. The reason: his name and military service could not be found in the American veterans archive in St. Louis, Missouri.

“In every letter of denial that I received, the U.S. Department of Veterans insisted that there’s no written document about my military service,” he said. “I told them, ‘Look, everything was in verbal at the time.’ No one would sign a piece of paper while you were in the battleground.”

Undeterred, Almeda said that he responded in detail to each letter of denial he had received. He chronicled, in his own words, how he joined the guerilla movement to help Americans in fighting against the Japanese.

“In 1941, I was called for active duty as part of the anti-sabotage regiment under Col. Erineo Cornejo,” he recalled. “My battalion was supposed to be assigned to fight in [the infamous] Bataan, but it was too late because the Japanese troops had already infiltrated most of neighboring provinces.”

As the war continued, thousands of American and Filipino troops succumbed to the Japanese forces.  In order for Almeda and other Filipino troops not to become prisoners of war, he said he was dismissed from the military service on January 5, 1942.

Struggling against great odds to save the Philippines islands, on March 11, 1942, U.S. Pres. Franklin Roosevelt ordered U.S. Gen. Douglas MacArthur to abandon the Philippines, which was an American commonwealth during the war.

About 90,000 American and Filipino troops were left behind as MacArthur and his family retreated to Australia.

If the U.S. government would acknowledge Almeda’s military service, it would formalize his recognition as a veteran and make him eligible for veterans’ benefits.

The U.S. military promised at the time of World War II to give full veterans’ benefits to every Filipino who volunteered to fight. More than 250,000 Filipinos joined.

In 1946, however, Pres. Harry S. Truman signed the Rescission Act, taking that promise away.

Still, admitting that the Act resulted in “discrimination,” Truman wrote to the House and Senate: “The record of the Philippine soldiers for bravery and loyalty is second to none. Their assignment was as bloody and difficult as any in which our American soldiers engaged. Under desperate circumstances they acquitted themselves nobly.”

For many decades, the Filipino veterans were left without any benefits. Many of them had died while waiting for the benefits to come.

In 2009, a provision tucked inside the stimulus bill that Pres. Barack Obama signed, known as Filipino Veterans Equity Compensation Fund, the U.S. government gave a one-time, lump sum $15,000 for every eligible Filipino veteran who was a U.S. citizen, and $9,000 for a non-U.S. citizen.

While Obama was visiting the Philippines in 2014, he admitted that “it was injustice” to Filipino war veterans who were denied compensation for their services under the American flag.

“That amount is nothing compared to what they sacrificed for this country,” said Eric Lachica, executive director of American Coalition for Filipino Veterans. “What we’re really asking for is full recognition and fair treatment.”

To date, less than 18,000 Filipino veterans are alive. And, like Almeda, some of them are still fighting for recognition of their military service.

But Melegrito, who is a son of a Filipino World War II veteran, said that Almeda and 25 more living Filipino veterans, along with 200 next of kin to deceased Filipino veterans, will be given the Congressional Gold Medal— the highest civilian honor bestowed by congress— this month.

Speaker of the House Rep. Paul Ryan will honor and give medals to the Filipino veterans in a ceremony set for October 25, coinciding with the observance of the Filipino American History Month.

“It took from June 2015, when the bill [Filipino Veterans of World War II Congressional Medal Act] was filed in Congress, to December 2016, when the full Congress approved the measure,” Melegrito said. “What made it possible was the co-sponsorship of the legislation by both majorities in the House and Senate.”

“I am very much honored and excited about the award,” said Rudy Panaglima, an 87-year-old Filipino veteran who lives in Arlington, Virginia. “My entire family will be at the ceremony.”

Panaglima, who fought during the war in Biñan, Laguna, says that surviving the military combat and being alive is the greatest blessing that had been given to him. But getting recognition for his military service, he adds, was “humbling.”

“I always remember the fear, uncertainties of the war,” he said. “There was a time when I didn’t event know I’d still be alive the next day. Or, I didn’t know how to surpass the dangers.”

Similar emotions resonated with Melegrito, whose father was a Bataan Death March survivor and served in the military under Gen. Jonathan Wainwright.

“Of course, I am thrilled. My father, Gregorio G. Melegrito, died in 2005, so I am sad that he didn’t live long enough to witness the congressional presentation,” he said. “I’d like to think that we, their children and grandchildren, have accomplished our mission by ensuring that they get recognition, and that their memories and stories are kept alive.”

For Almeda, he admits that a huge part of him feels “very much honored and triumphant” about the congressional award, while another part reminds him that his own battle is still unresolved.

As of 2009, his request for recognition of his military service has been pending.

“Sometimes I tell myself, ‘why do I have to insist when I know that it could be the same result,’” Almeda said. “But I just have to keep fighting until the very end.”